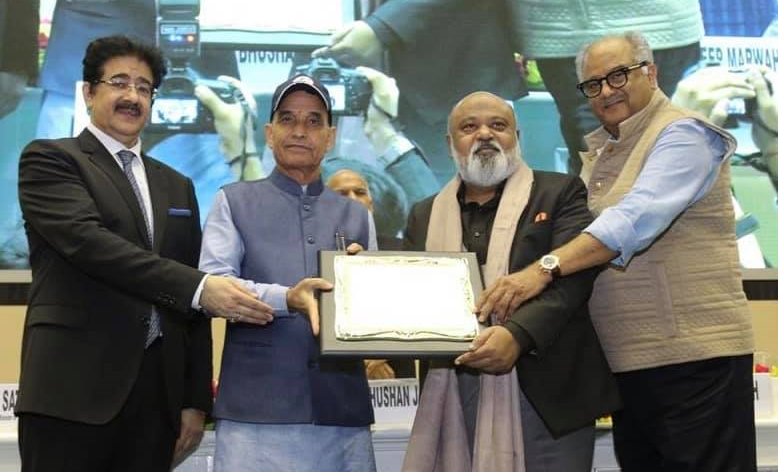 The historical and distinguished hall of the Vigyan Bhawan saw the 2nd Edition of Hindi Cinema Samman Samaroh where the big wigs of Indian film industry were honored for their untiring contribution to Hindi Cinema.

“In almost 110 years of the Hindi Cinema we somehow forgot to honor and highlight the contribution of this most popular cinema of the World at the central level with National awards exclusively. We at International Chamber of Media And Entertainment Industry (ICMEI) could feel the pain of this need last year,” said company’s President Dr. Sandeep Marwah.

Reportedly, this year, an award committee was constituted at ICMEI in association with Asian Academy of Film And Television and announced the National Awards in the first go for film producers Boney Kapoor, Mehul Kumar, Veteran actor-director Nandita Das, Actor Sanjay Kapoor, Zareen Khan and film educator Deepak Marwah. The event was graced by Satya Pal Singh and Vijay Sampla, both MoS in the Modi cabinet.

Moreover, Script writer Kamlesh Pandey and Journalist Kumar Mohan too were among the recipient.

“Appreciation is the key to enthusiasm. Our film industry is known to the world. The best filmmakers of the World watch Hindi Cinema as it is a total entertainment,” said Boney Kapoor, who chaired the awards committee.

“Hindi Films have contributed to Hindi learning not only in India but all over the World. Not only entertainment, Hindi films are the best ambassador of our culture too. People all over the World like and love hindi cinema. I congratulate each and every awardee and especially Sandeep Marwah for taking initiative to start an award like this,” said minister Satya Pal Singh.

“Hindi Cinema is the biggest in the country number wise, quality wise and popularity wise. It needs to be honored and highlighted. I am lucky to be associated with now the most prestigious National Award for Hindi Cinema. My best wishes to each and everyone present here and to the whole Hindi film industry for marvelous contribution towards entertainment,” said minister Vijay Sampla.

The award function was the third day event of the 11th Global Film Festival Noida 2018.