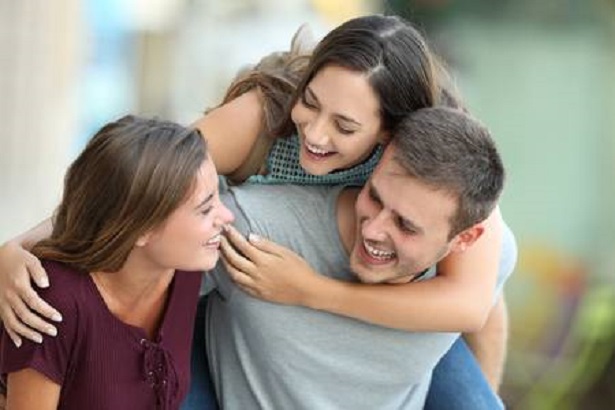 “It’s alright girl. Now come on help me packing her stuff.” said Ruhaan.
Tamanna could barely control her tears anymore. She ran towards Ruhaan, who was busy packing Myra’s clothes and hugged him tightly. Ruhaan turned around at this sudden touch and gave her a big bear hug. He knew she was missing Shlok.
“I don’t like her much anyway. So how about you and me?” Ruhaan said with a wicked smile to cheer her up.
“You better do like her a lot. Else next time I’ll throw your stuff right outside the house.”
“Madam, this is my house. Don’t forget I gave you the spare keys just in case you needed some place to unwind or so”
Tamanna finally smiled. She knew only Ruhaan was someone who understood her more than her others friends. Of course, there was Shlok, her boyfriend whom she loved to bits but he was away in the US working for his dream career while Tamanna supported him by staying strong and taking care of herself alone.
Ruhaan and Tamanna had been best friends since the day they met.
Tamanna was tipsy at her office party, dancing her out with friends when she saw Ruhaan. He too was busy dancing with his girlfriend. Entire office knew about their romance. After all, they made an adorable pair and everyone secretly wanted to be a couple like them.
Being true to her drunk self, Tamanna went up to Ruhaan and his girlfriend, Myra and said, “Sorry to say this but you guys doing a slow dance on the wrong song. This one’s a hip-hop number” Those were her first words spoken to either of them. She then quickly twirled around and went away. Ruhaan was amazed who this drunken girl was and ended up laughing at her comment. On the other hand, Myra didn’t like Tamanna’s behaviour but they continued to close dance again.
Embarrassed by her action, Tamanna reached out to both of them via internal message tool the next day and apologized. Soon they became good friends and started hanging out often.
Ruhaan and Tamanna struck the cord instantly. They could talk about any topic and had agreed to disagree on most of them. Their conversations were more like roundtable discussions which rarely concluded but had shared different views on the single situation.
“Are you free tomorrow?” Tamanna asked Ruhaan over the call last night.
“I don’t have anything planned as such. Is everything alright?” Ruhaan inquired sensing difference in her voice.
“Yes, it is. I want you to come with me somewhere tomorrow. Do not tell about this to anyone, even Myra.”
“Okay.”
“Pick me up at 1:00 PM from my place.”
“But where are we going? At least tell me that.”
“All your questions will be answered tomorrow.”
Ruhaan reached her place 5 minutes before 1:00 PM. Tamanna was already waiting for him in the building parking. She saw his car arriving and got inside quietly. Ruhaan inquired again, “Where are going Tamanna?”
“Holy Trinity hospital”
Ruhaan got worried. “Why? Are you fine?”
“Yes, I am. It’s for you. Now will you drive or should I take over the wheel?”
Ruhaan started driving. He wasn’t in a mood to argue with Tamanna. He was hungover from the beer he had last night plus he was stressed about his relationship with Myra. Things between them were off from past few days.
On reaching the hospital, they went to the reception directly, “Myra Jaiswal’s room number please.” “402” The response came. Ruhaan stood confused. He didn’t know about Myra’s father was hospitalized. He looked at Tamanna, “I told you this is for you. You’ll get your answers in the next few minutes.”
They entered the room marked as 402. Inside was Myra lying on the bed with plasters across her legs. On seeing Ruhaan she cried and started saying “I’m sorry.” Ruhaan went close to her and held her by the shoulder while she cried.
Softly Tamanna said “Myra wanted to give you a surprise for your coming anniversary. She was busy planning and organizing things when she slipped from the stairs of her apartment last night.”
Ruhaan didn’t know if he should laugh or feel bad for Myra. Everything made sense to him now. Why suddenly Myra cancelled their weekend plan and said how she was suddenly uncomfortable with Tamanna’s presence. She wanted time off to plan things and the best way to do was to piss him off so that he won’t bother her much.
He immediately went ahead and kissed her on the lips and said, “Anniversary is just the mark of completing another beautiful year. But with you, I lose all the track of time and would like it to be that way till eternity.”
Tamanna smiled and sneaked out of the room to give the couple their time. She reached Ruhaan’s place to collect some of Myra’s stuff.
Soon Ruhaan reached home as well.
Ruhaan stepped in the house and gave a hug to Tamanna, “Now I understand all this sudden I don’t like Myra attitude. You too were helping her plan the surprise.”

In the world of temporaries – What do I look for in my permanent?