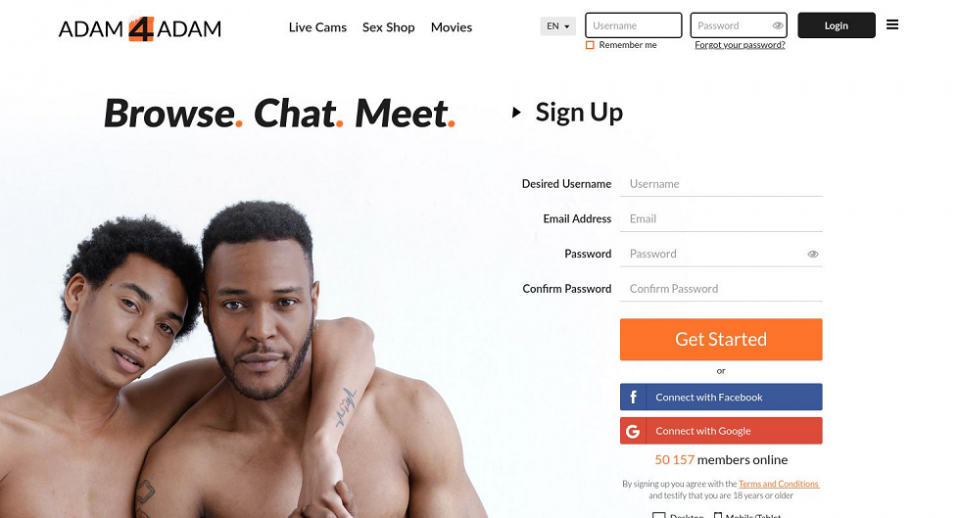 Adam4Adam is one of the oldest gay dating websites, as it was launched in 2003, and still has plenty of active users. Users enjoy its dated-looking interface and surfeit of fully nude profile pictures. But be warned, it leaves little to the imagination, so this is definitely not a site that’s safe for most workplaces or for browsing on public computers. In terms of compatibility, you’re more likely to find a quick, no-questions-asked fling. In fact you can watch a live cam show, shop for sex toys, hire an escort, or meet locals in your areas for a romp in the sheets. As a one-stop-shop for gay men to connect, it is unlikely that you’ll find a lasting romantic connection, but this is one site that anyone who is looking for a no-strings-attached fling should have. Let’s take a look at some pros and cons of this dating site:

Adam4Adam: Everything To Know Before Signing Up

Adam4Adam calls itself as “The World’s Largest Gay Social Network,” and with a built-in sex shop and premium cam site, it has a particular vision of what that means. While the dating site might not be the most beautiful site in the world, it definitely serves its intended purpose, and its paid features do seem to improve the likelihood of hookups.

One big con is that users living in rural areas will find their options more limited than urbanites. But with a large member base, a primitive geotagging feature you can turn on and off, and no required financial commitment, Adam4Adam might be the best of the quick-and-dirty options to get yourself a quick fling.

The signup process is relatively simple — it only takes about 90 seconds, and skips features like the Grindr-popularized “tribe” — albeit without doing away with security and safety altogether. That’s because on Adam4Adam, your profile needs to get approved by the app’s support team in order for other members to be able to message you.

Unlike most gay dating sites, Adam4Adam doesn’t make it necessary for you to upload a picture of yourself, but they note that doing so increases your chances of finding someone.

After you’ve created your profile and it is approved, you’re able to browse through the profiles of other men in your area.

Please know that Adam4Adam is largely a sex application, in large part because users can post escort ads. Although these ads are in a separate part than the regular ads, it is still very much a part of how users interact with Adam4Adam.

Adam4Adam streamlines the signup process for creating an account by asking only 4 basic questions. Unlike Grindr, your email account must be verified before using the service — an attempt to dissuade people from creating fake profiles. Once you’ve created your account, it is easy to add a photo, short bio, interests and other applicable fields to find the type of men that you’re looking for.

Logging in to Adam4Adam is simple as you just enter your username and password and there you go — you’re logged in. There aren’t any complicated bells and whistles here.

In 2016, Adam4Adam conducted maintenance on their messaging system, which now makes it easy to send photos within a message, and allows users to message their location and text messages. It is similar to its competitor Grindr in that sense, and the mobile app allows users to save previously sent pictures.

In terms of messaging, don’t expect life long partners as the website never claims to be anything other than a sex website. Be ready to get asked really personal questions immediately after saying hello, and others wanted my address. On Adam4Adam, even if you didn’t have a picture, it didn’t seem to stop others from sending whatever they want.

Plain and simple: this site is not safe.

In 2006, it was discovered that the site was being used to lure gay men in both New York City and Washington D.C. to remote areas where they were robbed and murdered.

As you can see the safety and security of Adam4Adam has been under scrutiny for quite some time even though Adam4Adam goes through a profile approval process.

Despite these setbacks, Adam4Adam is committed to removing fake profiles (hopefully they are). One way of accomplishing this is by ensuring that users have a verifiable email to create a profile, which is able to be tracked.

Despite its privacy setbacks, Adam4Adam has garnered coveted awards such as the award for “Best Mobile Dating App” at the iDate Awards in 2011. It also won other awards for excellence in the field of mobile dating apps and handheld apps as well as About.com’s 2012 Best Dating Application.

“For the money they make off membership there app crashes 99% of the time and so does there website. they out souce all if the developers and honestly there old and seem to not keep up with the user experience. Back at having network issues with the app again. The first ads are now getting to become a very annoying thing on the App store

many fake accounts. Not safe place”.

“Many (most?) accounts on here are fake with pics of models. Are usually far away with explanations that they are in military serving overseas (think many are actually in Africa running scams). All looking for love and ltr. They immediately try to get your name and very quickly move conversation offline where they continue con which includes falling in love quickly and eventually getting things like funds, iTunes cards or more info on you. I suspect multiple fake accounts are run by same people”

Extended Warranties Are Moving Online and Olive Is Leading the Charge

How Have Professional Cleaning Companies Helped During the COVID Pandemic