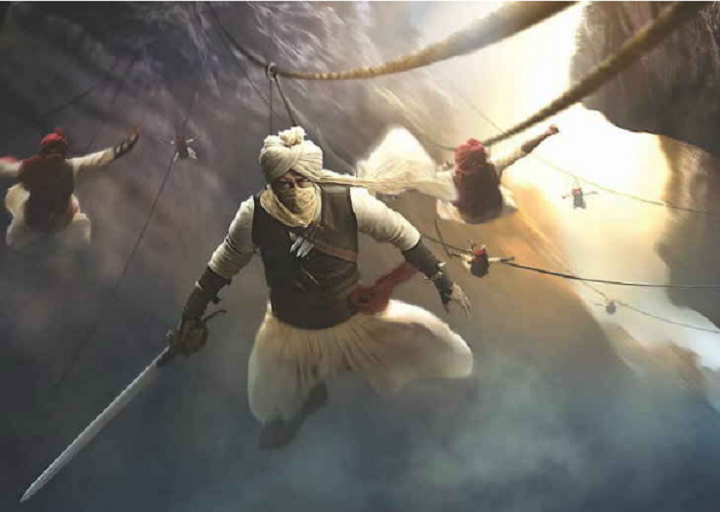 History and epics have become the latest trend in Bollywood movies and in 2019, this trend is expected to be continued. This year, we are expecting the release of two big budgeted films: one which is linked with fierce Maratha empire starring the Singham himself, Ajay Devgan and the other one about ambitious Manikarnika starring Queen herself i.e. Kangana Ranaut.
While the Queen of Jhansi is all about the life history of Rani Laxmibai, Tanaji is about Maratha commander who took part in Battle of Sinhagad in 1670. The first look of Tanaji movie was shared by film’s director, Om Raut in July 2018. However, this new year, the director shared another picture from the movie that showcases Ajay Devgan like a warrior jumping from between mountains with other warriors in behind.
While sharing the picture with social media, Om Raut wrote, “Happy New Year!!! Har Har Mahadev!!! @ajaydevgn @TanhajiFilm.”
The picture reveals that Tanaji and his men are jumping somewhere from valleys of the mountains, holding ropes and swords. They all are dressed in white dhoti’s similarly like Maratha people used to wear and a Kamarbandh (waist band) along with pagdi (turbans), armour and face half-covered. In the picture, we get to see Ajay Devgan’s intense eyes that is almost unmistakable.
The director of the movie has been sharing the pics of Tanaji’s sets at regular interval which confirms that Raut is an artist cum director. The recent success for the creation of elegant sets of Bahubali series, Sabu Cyril is again ready to create another epitome.
On 2nd January, 2019, Raut shared Film’s poster that titled Tanaji: The Unsung Warrior and wrote, “Brave & Heroic. The unsung warrior of the glorious history of India. #Taanaji My next directorial venture [sic].”

Although we all are eagerly waiting for the release of this epic movie, but do you know the real story behind Tanaji’s character?
Tanaji is one of those heroes who fought the battle of Sinhagad in 1670 A.D against a formidable Rajput warrior and a Mughal fort keeper, Udaybhan Rathore. In 1655, Treaty of Purandar made Shivaji give up Marathas Fort Kondhana to the Mughal kings. The forts at that time was considered as a significant factor and Shivaji did not agreed to give his fort under any circumstances. He, therefore, assigned this task of reconquering the fort of Kondhana to Tanaji as he was the only one whom Shivaji trusted and believed was able to take this risk-oriented task. Despite of the fact that the mission was very intense, Tanaji remained calm and like a lion-hearted accepted Shivaji’s wish. He swore to complete the task and was ready to give up his life even for the sake of his tribe.
As per history, Tanaji used his pet lizard named Ghopad in Marathi for measuring the length of the Fort’s walls and launch a sudden attack. Although his plan helped him breach the fort easily, being very few in numbers, he and his men were killed in the process. With his death, Marathas became very angry and charged the fort once again under the supervision of Tanaji’s brother Suryaji and won the fort.
Marathas faced victory at the end where they fought a great battle with power and strong determination, however, no one celebrated at the camp. The news of their victory was soon given to Shivaji who rushed towards the fort to congratulate Tanaji but encountered his slain body only. Shivaji Maharaj gave that fort a new name, Singhagad that means a Lion’s Fort in the honour of a great warrior.
Few people claim that with Tanaji’s death, Shivaji said that although we gained a fort, but we lost our lion.