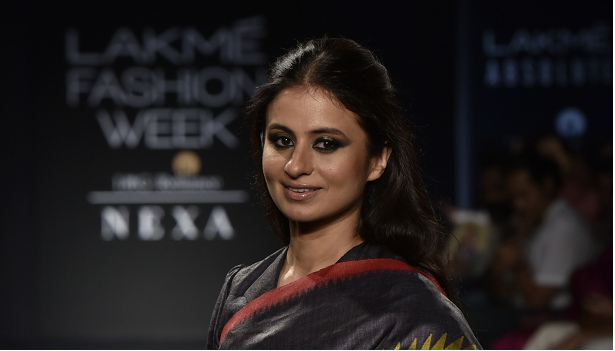 Bollywood actress Rasika Dugal, who will soon be seen on celluloid in Nandita Das’s ‘Manto’ with Nawazuddin Siddiqui, has another feather to add to her cap. The Qissa artiste made her debut as a showstopper last evening walking the ramp for an organic fashion label, Vriksh, at the ongoing Lakme Fashion Week. Vriksh is a design label that specializes in handloom textiles created by artists based in Odisha, to revive the statement pieces prominent to the state and bring back skilled craftsmanship that reflects the culture of the region.

Rasika has always been an advocate for sustainable fashion and has often been spotted wearing organic brands at different events. The actress who was recently at Cannes this year also wore sustainable fashion at various events of the film festival. The Vagina Monologues star was seen walking the ramp for the first time as a showstopper for the brand and is giddy with excitement at the thought of it.

“I am honoured to be a part of Vriksh’s debut show at fashion week. I am always moved by the precision and the craftsmanship (or should I say craftswomanship) involved in the art of weaving. Especially with weaving techniques like Ikat and Jaala .It is a level of skill that I can only marvel at. I am grateful for this opportunity to celebrate that skill and to celebrate the sari in Gunjan’s exquisite designs and drapes which is a harmonious blend of the traditional and the Individual. Which speak of the fierce as well as the feminine”, she said.

The B-Town lady has a rather busy year ahead. Her much anticipated project ‘Manto’, which will see her essaying the role of Saadat Hasan Manto’s wife, Safiya, is slated for release on 14th September and also has an upcoming web series, Mirzapur scheduled for release. Apart from that she will also be seen in a web show, Delhi Police, based on the Nirbhaya case and is playing the lead in Saregama’s Hamid, a film based in Kashmir speaking of the integral topic of Kashmiri women’s plight whose husbands are taken away by militant groups.