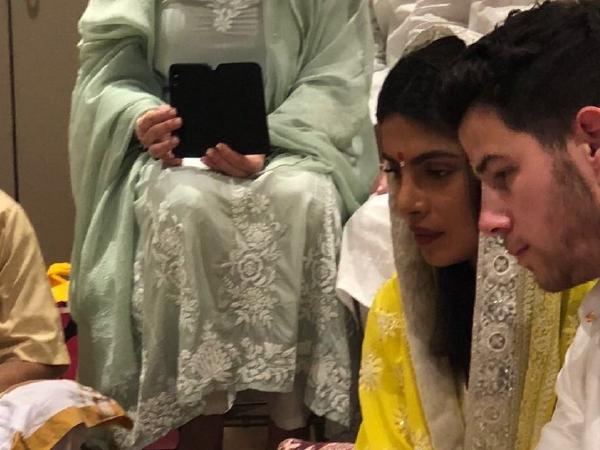 Priyanka Chopra and Nick Jonas are definitely one of the favorite celebrity couples of people right now. Bringing all the rumors and speculations to rest, they are finally getting engaged in a grand ceremony today at the actress’ residence in Mumbai.

And here’s the first glimpse of the couple! @priyankachopra and @nickjonas at the Roka ceremony today. #PriyankaNickEngagement pic.twitter.com/2pCumxiKVj

The roka ceremony is a private affair with only the family and some close friends present. Both Priyanka and Nick chose desi attires for the engagement. According to reports, the traditional engagement ceremony will be followed by an engagement party in the evening that will begin late.
Not just Priyanka Chopra and Nick Jonas, even his parents were seen wearing traditional Indian clothes at the couple’s engagement ceremony. While Nick’s father Kevin Sr was seen in a pristine white kurta-pyjama, mother Denise chose a beautiful green suit.

After their long romance that started during the Met Gala last year, Nick proposed to our desi girl a month ago on her birthday and making things official today. As per the reports, Priyanka Chopra and Nick Jonas are all set to get married this year itself. It was reported that the couple will most likely tie the knot in September when Nick turns 26.