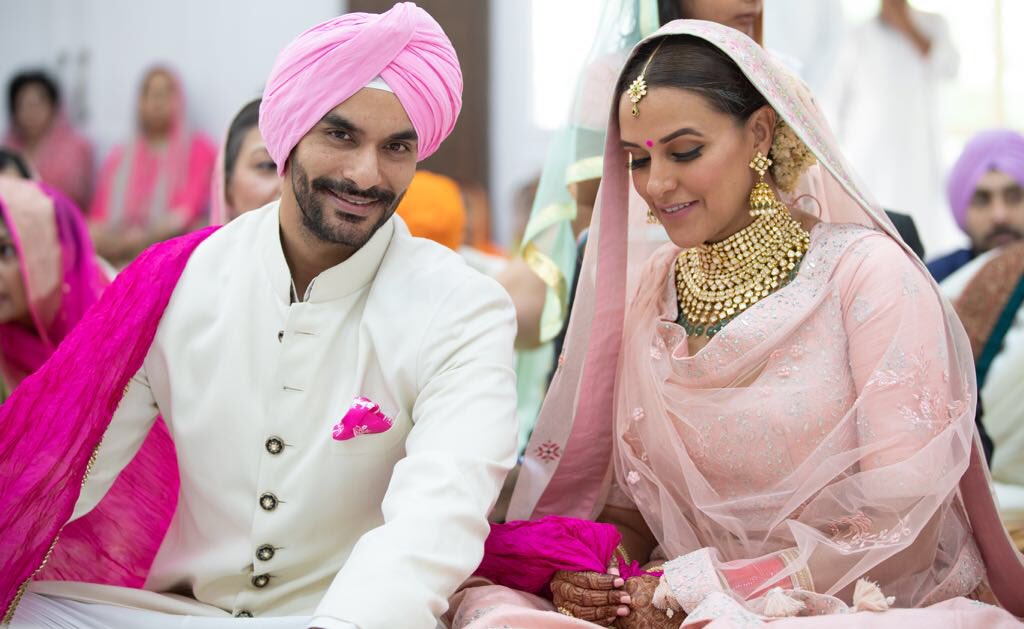 Looks like wedding season is going on in Bollywood. Since last few days, the marriage of Anil Kapoor’s daughter and actress Sonam Kapoor and Anand Ahuja are on the social media headlines.
But in the meantime, another Bollywood actress has got married and this has been revealed directly to the social media. Actress Neha Dhupia, who has appeared in many films like ‘Julie’, ‘Kya Houl Hum Hain’, has married Anand Angad Bedi.
37-year-old Bollywood actress Neha Dhupia has married Anand Bedi (35), a two-year-old actress. Both of them got married in the private ceremony. Filmmaker  Karan Johar has confirmed the marriage of Neha and Angad. Johar gave a photo tweet to inform Neha and Angad’s marriage .’
Here’s what Karan Johar captioned the picture, “The look of love!!! The marriage of eternal happiness!!!! #nehaangad CONGRATULATIONS!!!!!!”

Angad Bedi, son of former cricketer Bishan Singh Bedi and Ranji also played. After cricket Angad tried his hand in modelling and then acting. Angad and Neha, the first photo of this wedding in Punjabi style, has shared on Twitter just recently. There was very little news in Bollywood about Neha’s marriage. Neha Dhupia announced the news on her social media by sharing a picture with husband Angad Bedi. She wrote- “Best decision of my life.. today, I married my best friend. Hello there, husband!”

Neha wore a soft pink colour cloak in her wedding in which she looked beautiful, while Angad Bedi looked very smart in white-coloured Shervani and pink turban.


Angad Bedi is popular for films like Pink, Tiger Zinda Hia, and Dear Zindagi. Neha, on the other hand, is popular for shows like Roadies and her radio show No Filter Neha.
previous post

Oh my God! You wrote that?

Hi I am Shweta, A Digital enthusiast, writer, blogger, travel lover based in Indore. I am Freelance Digital Marketing Professional and have my own blog voodly I am passionate about create something great and spread to the world. I will share my thought about Business, Fashion, Lifestyle and Entertainment. I believe in living the life fullest and happiest and keep doing self improvement.

It’s raining marriages in Bollywood this season then!
Heartiest congratulations to the lovely couple! 🙂