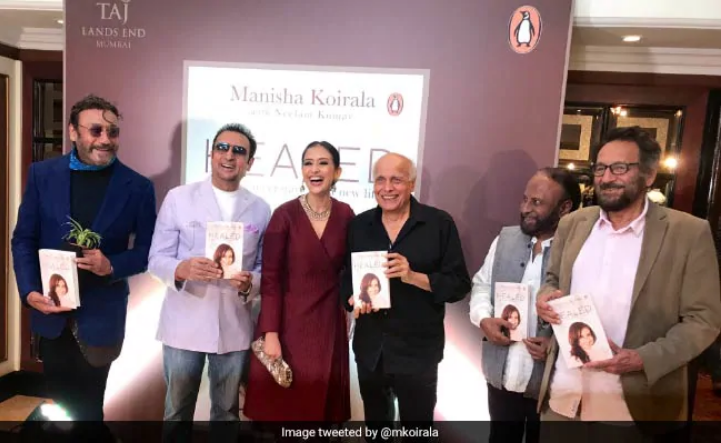 Bollywood actor Manisha Koirala was seen recently during the launch of her own written book ‘Healed: How Cancer Gave Me a New Life’. During the book launch, she talked about famous Bollywood actor, producer and director Rakesh Roshan who is being diagnosed with Throat cancer. The actress prays for him and wishes that Rakesh Roshan comes out as winner.
During the event of book launch, she celebrated the completion of her book titled Healed with other Bollywood personalities like Rekha, Mahesh Bhatt, Anupam Kher, Imtiaz Ali, Amruta Fadnavis, Dia Mirza, Jakie Shroff, Gulshan Grover and many more on Tuesday.
The book is co-written by Neelam Kumar along with National Award-winning actress, Manisha Koirala that is an autobiography subtitled ‘How Cancer Gave me a New Life’. With a smiling face on the cover page of the book, the book reflects the positivity and encouragement that made Manisha sail her through her battle against one of the most painful disease. During the book launch, the actress said “When I was diagnosed with Cancer that time, I was traumatised but when I look back, I feel it has given me new perspective to see life in a different light and lot of hope about many things in life. It also made me realize that how important my life and health is to me.”

In the book, the actress reveals her battle against ovarian cancer that got detected in 2012. At that time, Manisha was not sure whether she would live or die, but between several feelings filled with “hopelessness, helplessness, powerlessness,” throughout body, mind and spirit, the actress talks about how her family stayed beside her, thus forming a sturdy support system to conquer any battle against life.
For treatment, Manisha went to U.S where she spends her few painful days at Memorial Sloan Kettering Cancer Center. The biggest trauma of her life began with an eleven-hour surgery that extended to 18 sessions of chemotherapy which lasted for about six months. In the book, she mentioned that “…the cancer had spread like a bowl of Rice Krispies all over the organs,”. Along with it, she even named few people who stood by her side all the time, giving details about what little things they did to keep up her spirits. Now, as she recovers, hope and positivity shines through all the dark hours spent by her.

The book is divided into three segments: the illness which was fought by her, her Bollywood days, and a short description of her transformation from previous behaviour following a rough guide about how she would like to live differently in future years. The book shows a powerful, deep and moving personality of Manisha during her fight against ovarian cancer that takes us to emotional roller-coaster ride, surpassing many fears and battle showing how she came out of tough times winningly.
The actress spoke that she is spending good times now, all contended to spend time by herself and enjoying solo travelling. She revealed that before cancer, she never tried such things and said, “I was not able to do that. I constantly needed company, distractions. Of course, we need people: family, a few friends, sometimes unknown people strengthen me.” She further added, “Today, my relations and friendships are more rooted and solid. Maturity and a life-changing experience lets a lot of fluff fall off.”