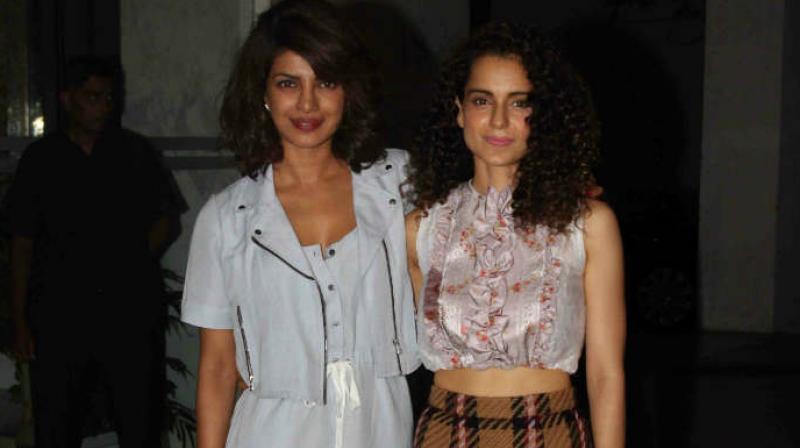 Priyanka Chopra who is yet to open up about her relationship publicly, reportedly got engaged to American singer Nick Jonas on her birthday. And now, Bollywood’s real Queen has made a big revelation about Chopra and Jonas’ impending marriage.


At the Vogue Beauty Awards 2018, Kangana was asked if she was looking forward to Priyanka’s wedding. “I spoke to Priyanka the other day and I congratulated her. She responded in a very… She seems excited and very happy. If such an event is taking place, I’d love to celebrate with her because she is lovely and she deserves all the happiness. She is a very dear friend. I get very happy and excited with weddings and engagements.” Kangana told reporters at the event.

When asked if Priyanka Chopra has confirmed the wedding date, Kangana Ranaut replied, “Not to me.”
Days after Bharat director Ali Abbas Zafar wrote that Priyanka left Salman Khan’s film “in the Nick of time” leaving her fans in a massive meltdown. Zafar’s tweet started frenzied speculation on Friday that Priyanka and Nick had gotten engaged on her birthday in London. He wrote in his tweet, “Yes Priyanka Chopra is no more part of Bharat The Film & and the reason is very very special, she told us in the Nick of time about her decision and we are very happy for her … Team Bharat wishes Priyanka Chopra loads of love & happiness for life.”

Yes Priyanka Chopra is no more part of @Bharat_TheFilm & and the reason is very very special , she told us in the Nick of time about her decision and we are very happy for her … Team Bharat wishes @priyankachopra loads of love & happiness for life 😊😉😍

While both Priyanka and Nick have not commented on this, it is now being reported that the couple may tie the knot later this year.