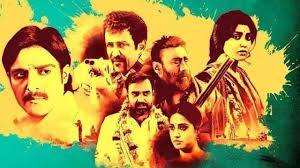 It is always believed that actors demand a whopping fee for every project they sign. However, sometimes they come across such enticing scripts that the remuneration hardly matters, and reportedly same happened in the case of the upcoming crime drama – Phamous.
Set in the infamous ravines of Chambal, debutant director Karan Lalit Butani’s Phamous boasts of some of the most renowned and brilliant names of the industry like Jackie Shroff, Jimmy Sheirgill, Shriya Saran, Mahie Gill, Pankaj Tripathi and others.
It is quite a feat for a movie that is made on a tight budget to have such well-known and talented actors on board, but honestly, it wouldn’t have been possible had it not been for these actors, who charged much less than their usual fee for Phamous.
The story of the film was so captivating that most actors didn’t mind coming on board with little or no pay at all. Yeah, shocking but true.
“I am really grateful to all my actors for having faith in me and believing in the film so strongly that they didn’t even think much about their remuneration,” says director Karan Lalit Butani.
He further adds, “For instance, Jackie da charged just a little more than a penny for this film, if I may say so. What he charged my producers was marginal compared to what he gets in the industry otherwise and most definitely deserves. That’s the case with all the actors who worked with me on this film. All of them charged almost half of what they charge otherwise. And Mahie Gill didn’t even charge a single dime for the project.”
‘Phamous’ revolves around a power struggle and invites the audience on an odyssey that hits heart and face at the same time. Scheduled to releases on June 1, the film is presented by Raj Khatri Filmz and produced by Raj Khatri, Vidisha Productions and Amitabh Chandra.
previous post

Whoa! They still do this? It’s so refreshing to know that people in the industry still believe in following their hearts instead of just becoming a money-making machine.

Exactly.. they are real actors for whom the’script’ matters the most.