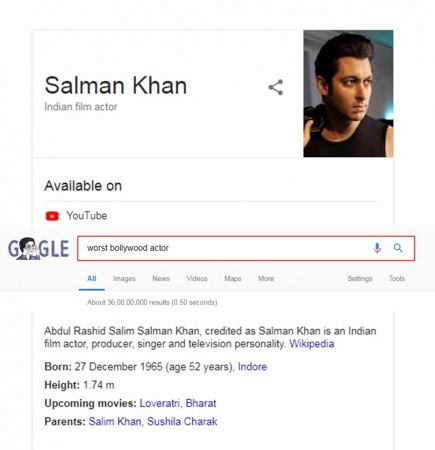 When you type ‘worst Bollywood actor’ in Google, it shows Salman Khan’s profile.
Salman Khan’s Race 3 had hit the screens but the film turned out to be a ‘must-not watch’ for its poor performances, senseless dialogues, cringe-worthy songs among many other reasons. However, the film set the box office on fire as content is not even the last on the list of things that matter to make a bhai film a blockbuster. But search engine giant Google does seem to care.

When searched for the ‘worst Bollywood actor’, Google pops up Salman Khan’s name. Twitter users are now having a field day trolling the 52-year-old actor after watching director Remo D’Souza’s action thriller Race 3
Now whether this is a technical glitch or Google itself is giving a certificate to Salman for being the worst actor after watching his latest flick, it is for it to answer.
Don’t believe us? Try it yourself.

What is Thunder TV? And is it legal or not? Here are the answers.

Somehow that picture does not look like Salman!! Lol.

Santwona actually this is wax statue of Salman in Madame Tussauds.

I am not typical Salman Khan fan but everyone knows He is biggest entertainer of Bollywood.