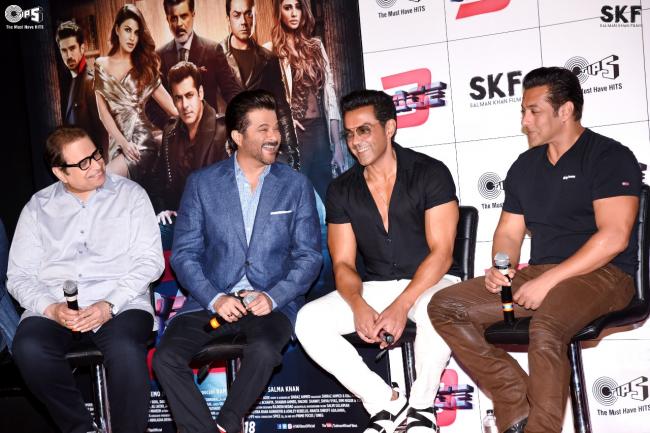 Race 3 directed by Remo Dsouza brings together an ensemble cast and while a few may have worked together for the first time, what came to our notice was Anil and Bobby’s first time pairing!
The actors have been in the industry for decades and it is surprising how no director thought of casting them together! We must say, Remo Dsouza has totally pulled off a casting coup with Race 3!
Anil and Bobby’s bromance was witnessed by all when a recent video of Bobby pecking him on the cheek went viral. Adding to this, Anil was all praises for Bobby Deol’s hard work and dedication to his craft.
It would be interesting to watch the duo scorch the screens in their Jhakaas and Soldier style!
Salman Khan Films and Tips Industries Limited present Race 3, starring Salman Khan, Jacqueline Fernandez, Anil Kapoor, Bobby Deol, Daisy shah, Saqib Saleem and Freddy Daruwala is directed by Remo D’Souza and produced by Ramesh S Taurani & Salma Khan. The film is slated to release worldwide this Eid on 15th of June 2018.

Want to be healthy? Sing Loudly!