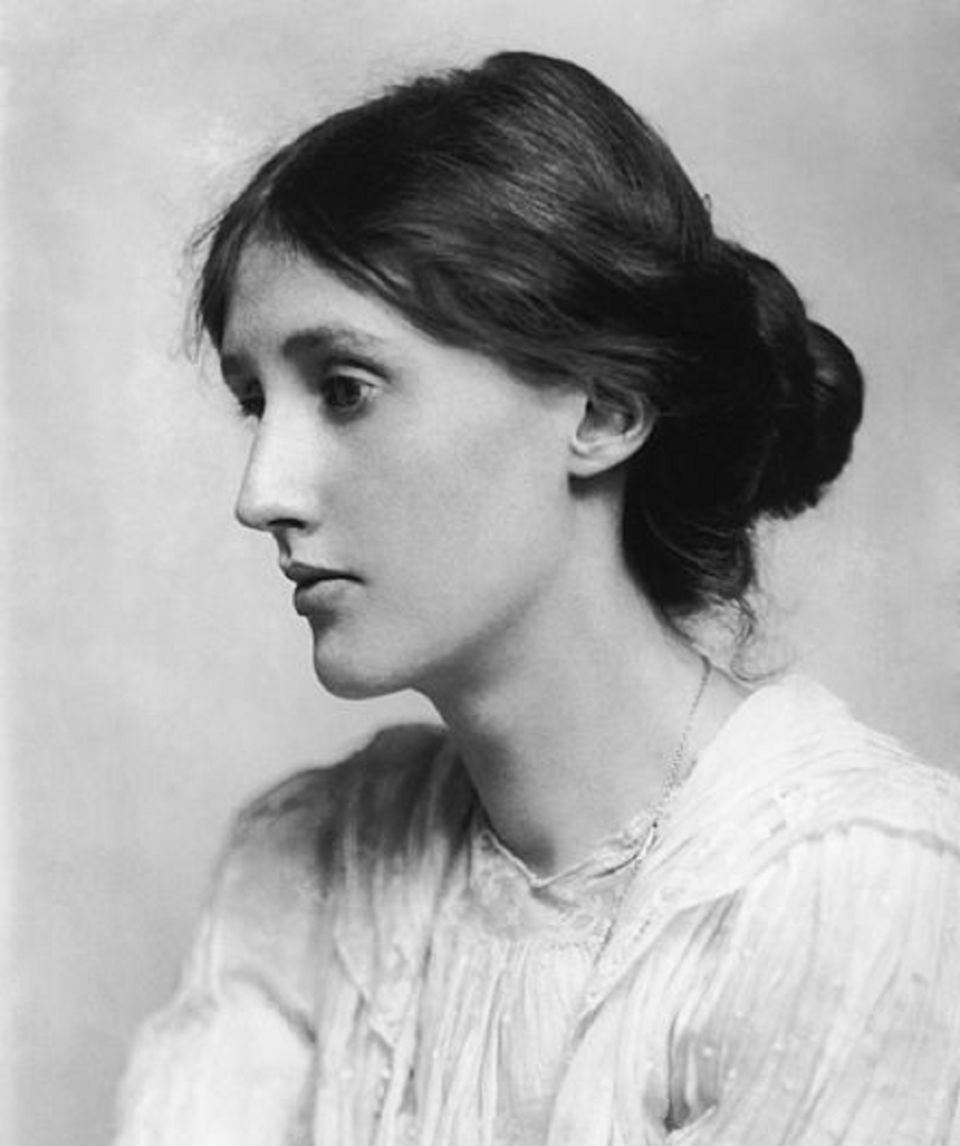 Virginia Woolfe was, one of the foremost modernist/feminist literary figures of the twentieth century.

Descended from a great many people, some famous, others obscure, Virginia Woolf was  born into a very communicative, literate, letter writing, visiting, articulate, late nineteenth century world. Here are some interesting things about the British writer:

1. She was born to a father who dominated her:

Virginia Woolf’s father Sir Leslie Stephen was fifty years old when his second daughter, Virginia, was born on January 25, 1882. He had been married before, but had remarried to a widow with three children. He reared that family and now was in the midst of rearing one of his own. Sir Leslie was a renowned literary critic, and was also not always a pleasant father to live with. Years after her father was dead, Virginia, over fifty herself, wrote in her journal that had her father lived she would never have produced either her novels or the many volumes of essays. Her father’s dominance would have stopped all creativity.

2. Nonetheless, she was a beauty who absorbed her father’s thinking:

Virginia inherited her father’s passion for books, and, from her mother, she inherited beauty. Virginia and her sister Vanessa were strikingly good-looking girls, their beauty being classic Greek rather than “pretty.”  Both girls acted with certain demure shyness but underneath they were, like their father, out-spoken and satirical.

3. Out of all the Stephen children Virginia Stephen was unusual:

Aside from having James Russell Lowell as godfather, and besides being self-educated, in her mid-teens Virginia filled a number of copybooks with original compositions, imitating first one literary style, then another. Later, after both her parents were dead, Virginia moved out of the family home in Hyde Park. There, she took a lease on a large four-storied house in Brunswick Square and rented the top floor to Leonard Woolf; she occupied the third floor; her brother Adrian lived on the second; and Maynard Keynes and Duncan Grant occupied the bottom apartment. In 1911 such arrangements were very daring for most young women but to Virginia it seemed like a practical thing to do.

4. She went on to marry her tenant:

Leonard Woolf had been in the Civil Service for seven years and was happy to re-acquaint himself with his old friends, the Stephens. Not surprisingly, while he was living in the apartment above his “landlady,” during his leave of absence, he fell in love with Virginia. He tried to prolong his leave so that he might return to Ceylon if Virginia refused his proposal of marriage but the Service demanded an answer, so Leonard decided to resign and gamble on Virginia’s saying “Yes” to him. He courted her with long walks, tickets to the theater and to the ballet, but Virginia was reluctant to give him an answer. When she finally agreed to marry him, they made a special day of it. They took a train out from London, then hired a boat, and rowed up the river. A little over a month later, they were married.

5. She had a history of suicidal thoughts that doctors misunderstood:

The Woolfs spent an extended leisurely honeymoon traveling through France, Spain, and Italy, and upon returning to London they moved into Clifford’s Inn on Fleet Street. In 1913, when Virginia was finishing The Voyage Out (her first novel), Leonard noticed that his wife was becoming irritable and nervous. She had worked on perhaps a dozen drafts of her first novel and now that it was almost done, she was developing excruciating headaches and was unable to sleep. Leonard was not unaware that Virginia had a history of mental instability before he married her. During her childhood, Virginia suffered a breakdown, and after her mother’s death in 1895 she suffered another breakdown. Now the old symptoms were recurring. For a few weeks, Virginia agreed to rest in a nursing home but upon coming back home, the delusions and sleeplessness returned. So, Leonard tried to get his wife to rest in Holford, a quiet little village, but Virginia’s condition remained unstable.

The Woolfs returned to London, and a few days later, Virginia attempted suicide by swallowing an overdose of veronal tablets. Four trained nurses were required during her recovery and, had it not been for Leonard, Virginia would probably have been at a mental hospital. The doctors who treated Virginia during these periods of semi- and acute insanity were either ready to place her in a hospital or they were (like the doctors in Mrs. Dalloway) only able to suggest that she be given plenty of rest and good food. In 1913 very little was known about mental illnesses such as depression; nearly all cases were diagnosed as various stages of neurasthenia.

Virginia’s breakdown lasted almost two years with only short periods as Leonard stayed with her constantly. Meals, he remembers, would often take an hour, sometimes two. Occasionally Virginia could be induced to feed herself but often Leonard had spoon fed her. At times Virginia was violent, depressed and suicidal; once she lapsed into a coma for two days.

6. Once again creativity was allowed to shine when she was in a strong mental headspace:

In 1915, her first novel The Voyage Out, which had been held up from publication for two years, received fairly good reviews and Virginia was cited as being an important new novelist.

Immediately she began Night and Day. In 1917, Virginia Woolf got back on her feet  and it was during this time that she met Katherine Mansfield and Middleton Murry. It was also during this period that Leonard and Virginia co-established the Hogarth Press. Many myths surround the Press, supposing it to have been the toy of eccentric moneyed dilettantes, but this wasn’t the truth. The Woolfs had been living off Virginia’s investments and had very little money, so Leonard bought the hand press in order to occupy Virginia’s mind with something manual.

During 1917 and 1918, there was not a single month that she did not have reviews in The Times Literary Supplement and, of course, she was working on her second novel. Leonard was fearful of another breakdown. But this creative tempo was helping Virginia. She always tried to keep a flow of creative writing pouring during the mornings, then, during the afternoons and in odd hours, she would write critical essays as relief and as a different sort of mental discipline.

7. The Hogarth Press was begun in Leonard and Virginia Woolf’s dining room:

The press was on the table and Virginia and Leonard taught themselves to print by the instructions in a 16-page manual. Their first publication was Two Stories — one by Virginia, “The Mark on the Wall,” and one by Leonard, “Three Jews.” The book was entirely hand-printed, hand-bound, and sold 134 copies. Ten years later, the Press was recognized as an important publishing house and their publications’ schedule was so full that the printing had to be delegated to someone else. During this time, the Woolfs published Kew Gardens by Virginia and Poems by T. S. Eliot (including “Sweeney Among the Nightingales” and “Mr. Eliot’s Sunday Morning Service”). Further on, the Press published another of Eliot’s poems, The Waste Land.

8. The backstory of her superhit novel: Jacob’s Room

The Woolfs lived in Hogarth House from 1915 to 1924. The Press was begun and became famous during the time WWI ran its course and ended. Night and Day appeared and received praise, but less than The Voyage Out; both books were financially unprofitable.

In April 1920, Virginia began Jacob’s Room, her first masterpiece. The novel concerns Jacob Flanders, a man remembered first through one person’s memory, then another’s. The viewpoint changes continually. It was Virginia’s first successful attempt since Kew Gardens to fashion a multidimensional reality and to concoct a plot that abolished past formulas for writing fiction. She was revealing many faces of reality when her contemporaries were insisting on a one-viewpoint. Therefore, it was not an easy book to write because Virginia had no models; she was creating a new medium of narration.

In addition, she was again suffering terrible headaches and insomnia and was required to spend much time in bed. She was diagnosed with lung problems, then for heart related issues. Again the doctors suggested (as they do for Septimus Smith in Mrs. Dalloway ) that all she needed was rest and relaxation. When she was able, however, Virginia continued to write, using a large piece of plywood with an inkstand glued to it, filling self-bound notebooks with her sharp script.

Jacob’s Room was published in October, 1922, and received fiercely partisan reviews; either the reviewers thought that the novel was a poetic, electric masterpiece or else they were shocked. Virginia Woolf, the latter clique said, had defied the form of the novel: she had gone too far!

They bemoaned the end of English literature. But Virginia was already working on Mrs. Dalloway (first called The Hours) and even though she was saddened  by the bad reviews, she continued to unfold yet another impressionistically told story. Looking through her diary, one notices her excitement of being able to battle words and form and being able to do so without also having to battle mental fatigue and illness. Simultaneously, Virginia was using the hours not spent with Mrs. Dalloway to write and assemble The Common Reader, a collection of essays about English literature. And, while writing on these two projects during 1923 and 1924, she was already planning her next novel, one to be written about her father and mother, To the Lighthouse.

9. It was not until after Orlando( published in 1928) that Virginia began to receive real monetary reward from her writings:

She was 47 years old and had written for nearly 27 years but it wasn’t until Orlando that her work became popular with the public. The critics recognized Virginia Woolf’s importance, libraries acquired them, but the public found them difficult. Orlando was a breakthrough, an extravagant novel tracing the reincarnation of its main character — as various men and women — throughout the ages of English history and literature.

During most of 1940, insomnia and nervousness grated at her. At the time, World War II was raging on and the couple decided if England was invaded by Germany, they would commit suicide together, fearing that Leonard, who was Jewish, would be in particular danger. In 1940, the couple’s London home was obliterated during the Blitz, the Germans bombing of the city.

One day in March, 1941, she wrote a note to Leonard: she felt that she was going mad and did not have the courage to battle the voices and delusions again. In the letter she wrote about Leonard’s goodness and his continuous, kind care. While she was writing the note, Leonard passed her worktable and reminded her that it was nearing lunchtime. A little later, he called her but there was no answer. He went to look for her and found her hat and her walking stick on the river bank. She had drowned herself.

Unable to cope with her mental illness, Woolf pulled on her overcoat, filled its pockets with stones and walked into the River Ouse on March 28, 1941. As she made her way to the water, the stream took her with it. The authorities only recovered her body three weeks later. Leonard Woolf cremated her and the remains were scattered at their home, Monk’s House.

Although Virginia Woolfe’s popularity diminished after World War II, Woolf’s work resonated again with a new generation of readers during the feminist movement of the 1970s and into the 21st century making her one of the most influential authors of all time.

Famous Stars Who Ruled Indian Social Media in the Year 2018