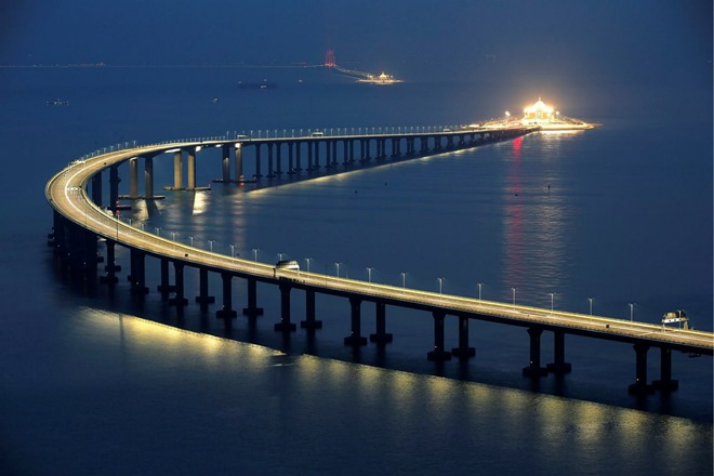 World’s longest sea crossing bridge and one of the latest marvels ever created by mankind was officially inaugurated by China’s President Xi Jinping on 23rd October that connects Mainland China and Hong Kong Macau.

The longest sea crossing bridge in the world was opened in a ceremony at Zhuhai which was attended by Hong Kong’s Chief Executive Carrie Lam and Chinese President Xi Jinping. The President announced the bridge open to all as fireworks exploded onscreen behind him. Being one of the longest in its kind is worth more than $20 billion that stretches approximately 55 km (34 miles).

Below are few unusual facts that makes this bridge different from the others.

To travel or get over this bridge, you need to get yourself checked for blood pressure and heart rate. Even, there are many cameras present throughout the bridge that monitors drivers to see whether they are yawning or not. All the information collected are sent to the control centres of the bridge. If any driver is seen yawning for more than 3 times in 20 seconds, the “Yawn cam” will give the driver an alert.

Driving through the opposite side

In Macau and Hong Kong, cars drive from the left side and in Mainland China from the right side that makes a bit confusing for the drivers onboard.
Since the bridge was constructed under Mainland China’s territory, drivers will have to follow right side path throughout the length of the bridge. Even the cars traveling from Hong Kong needs to “comply with the laws and regulations of the mainland” as reported by city’s transport head.
Nevertheless, a creative solution was put forward to handle this side swapping issue including Flipper Bridge named Pearl River Necklace that was proposed by Dutch architects, but a lesser exciting solution was adopted in the end where the cars stops and changes their sides at the point that is built specially for merging the cars of both the sides when they enter in the roads of Hong Kong.

Although this bridge has been built to connect regions of Macau and Hong Kong together to bring closer to Mainland China, this bridge is accessible to few selected persons only.
People traveling from Hong Kong will require carrying special permits to travel across the bridge. It has also been reported that to cross from Hong Kong to Zhuhai, long-term permits will be required following strict criteria like taxes paid to Chinese government and donations made to Charity institutions of Guangdong or members of political parties. Putting succinctly, there is no public transport available for the bridge for which this bridge has to face many controversies even.

This bridge will cut off the travelling time between Zhuhai and Hong Kong from 3 hours to 30 minutes while integrating into the Pearl River Delta cities.
The bridge has been designed to hold earth quake magnitude, strikes made by super-size cargoes and super typhoons and was built with 400,000 tonnes of steel capable of holding 60 Eiffel Towers!
A part of maintenance cost of the bridge will be covered from the tolls collected and according to a report prepared by BBC Chinese, “the bridge will only earn around $86m in tolls per year”.