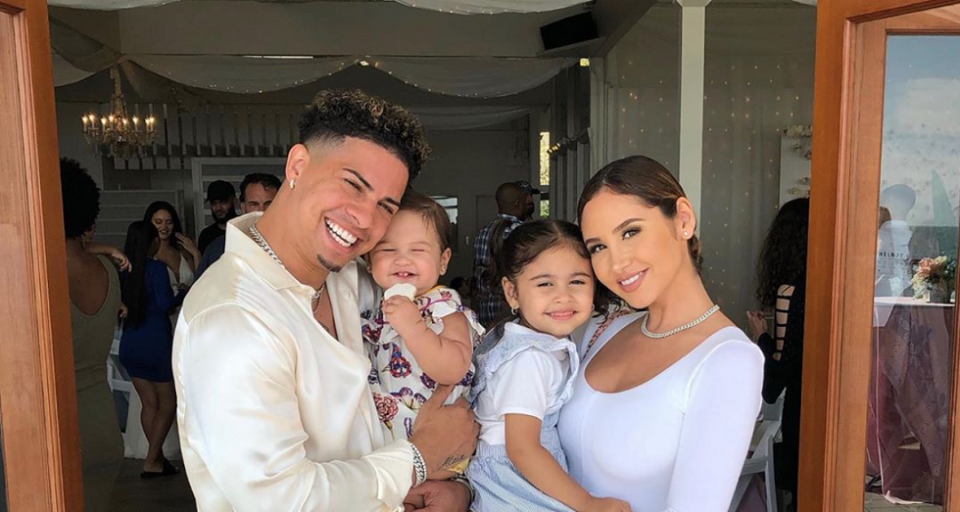 The Ace Family is like a fairytale come to life. It’s a family of a former college basketball player, an Instagram influencer and their two adorable daughters.The Ace Family has everything going for them. They are young, good looking and highly entertaining. Their daily vlogs are loved by their legion of fans and they keep pranking each other from time to time. Let’s find out more about the immensely entertaining and likeable Ace Family.

Ace Family: All You Need to Know

Who are the members of Ace Family?

Why is the Ace Family called so?

The “ACE” in Ace Family is an acronym made using the first letter of the names of the first three members of the family, Austin, Catherine and Elle. Alaia was born after the name Ace Family had already become popular. So there are no plans to change the name of the family to the “ACEA” family.

How many YouTube subscribers does the Ace family have?

As of the original publication date of this post, the Ace Family has over 18.5 million subscribers on Youtube. What’s incredible is that they have amassed this massive number of subscribers in just four years. Their channel only started in 2016 and their videos have over 3 billion views already.

How did Ace Family’s Austin McBroom and Catherine Paiz meet?

McBroom said that he knew he had something special with Paiz right from the very beginning, although he joked that it was Paiz who was immediately smitten. “We met at a little party dinner thing,” he told Power 106 Los Angeles. “Got there, shook her hand, and she was thinking about me ever since.”

After their first date, things started to get serious for McBroom, although it took Paiz a little bit longer to warm up. After their first date, McBroom didn’t get so much as a good night hug, let alone a good night kiss. Still, they kept seeing each other and it wasn’t long before McBroom confessed his love. Paiz, who was still getting her bearings in the new relationship, “just kind of ignored” the declaration, according to McBroom. “I wasn’t used to that to be honest,” said Paiz. “I just wasn’t used to like, things happening so quick, and things being so real so quick.”

Even though Catherine Paiz is quite young. She has been working for a long time. In the first ever YouTube video of the Ace Family, she said:”I’ve been working my whole life, I’ve always had a job since I was like 16. And I didn’t go to college. I moved to China after high school and I was there for quite some time. …I came back and went straight to work. I moved to Miami and I managed a venue, and I worked at a hedge fund, and I’ve done like so many different things.”

What degree does Ace Family’s Austin McBroom have?

Even though Austin McBroom was a basketball star at his college, he didn’t spend all his time on the court. When he was not practising, he was studying hard. He majored in Communication Studies. Many people expected McBroom to continue on with his promising basketball talent and turn it into a professional career. However, McBroom chose to forego a professional basketball career and chose to use his education to build a successful career. The astronomical success of the Ace Family shocked everyone but McBroom’s father was very happy with his son’s success. He was very pleased with the fact that Austin could be with his family every day.

What controversies has the Ace Family been in?

While the members of the Ace Family generally exude a very wholesome image, they have been embroiled in some controversies. In 2019, McBroom bought a penis-shaped lollipop for a little girl thought to be a member of the extended family. The video, which was shared on Snapchat, was later posted on Twitter by a user unrelated to The Ace Family who called McBroom “disgusting” in the caption. In the video, McBroom explained why he purchased the candy for the child. “She said she was going to steal it if I didn’t buy it, so better me buy it,” he said.

McBroom was criticized for sexualizing a small child and bringing her to a store filled with sexual things. He received heavy criticism for giving an adult themed candy to a child. In spite of the widespread backlash against McBroom and The Ace Family, neither McBroom nor Paiz commented on the controversial video.

This wasn’t the first time that the public has been mad at The Ace Family. In 2018, some of McBroom’s old tweets were dug up that said some less-than-flattering things about black women. “If you like em nice rachet [sic], black with the cheeks without morals… the city of St. Louis is for you,” read one now-deleted tweet from 2013 (via BuzzFeed). Another tweet from that year said “St. Louis is scaring me away from black girls…..blondes with blue eyes are looking more appealing !”

McBroom was also criticized for some of his comments about Asian women, such as a tweet from 2012 where he wrote “I need a massage, where my lil asians ?” His demeaning tweets towards women didn’t end there. He also tweeted in 2011: “I sit behind two of the hairiest females  I have ever witnessed in my math class. #wow”.

Which all sports does Ace Family’s Austin McBroom play?

Austin McBroom made a name for himself as a skilled basketball player who went on to play college basketball. But the athlete isn’t just a basketball phenomenon. He’s got talent in other sports, too. “I played three sports in high school,” he said in a YouTube video. “I played football, basketball, and baseball. And I was pretty decent at all three.”

What advice does the Ace Family have for prospective vloggers?

Austin McBroom had some great advice for people looking to make a career by vlogging. He said: “I think everybody, you know, sets expectations too high. Especially when they see a family like us. …That’s how we were. When we first started, we looked up to a couple people and we were like ‘Damn… how do we get like them. …But people can only get like that if you start. It takes time. So, as soon as you start, just get used to the camera, and believe in yourself and know it’s gonna come as long as you just work hard and be consistent.”

How many languages can Ace Family’s Paiz speak?

Paiz can speak English, Spanish and French. Paiz’ parents were born and raised in Panama so she grew up speaking English and Spanish at home. As she grew older, she had to learn French because she is a French-Canadian. All the schools in her region taught in French, so she ended up learning French as well.

What is Ace Family’s net worth?

The Ace family, which consists of former college basketball player Austin McBroom, his fiancé and Instagram influencer Catherine Paiz, and their two daughters, Elle and Alaïa has over 18.5 million subscribers on YouTube and are worth an incredible $13 million. This is an absolutely incredible achievement since they only started their YouTube channel in 2016. Their channel has over 3 billion views in total and 15,000 new users subscribe to their channel every day. The channel’s average daily view is a staggering 5 million. Those views alone generate $17,500 in revenue every day for the Ace Family. That adds up to a staggering $6.4 million in annual revenue.

This is mostly thanks to the ads that run on their videos. After YouTube takes what it’s owed, their stars get paid around $2 to $7 per 1,000 monetized views, which account for about 40 to 80 percent of their views overall. There are lots of different variables that contribute to these figures, including which device videos are played on, the viewer’s location, ad engagement, and more. Google Preferred also allows companies to target the top 5 percent most popular videos on YouTube too, and to pay a premium to host ads there.

While YouTube is the biggest source of the Ace Family’s income, it’s not the only source. The Ace Family also earns money through sponsorship and their own line of merchandise. They also joined the Univision network in early 2019, as reported by Variety, which should expand their income considerably. The Ace Family showed off their staggering mansion to the public in June 2019. They had been working on it in secret and the audience was surprised by it. The palatial building is a beautiful place to live in. The mansion has jaw-dropping features including floor to ceiling showers and huge walk-in closets. Catherine Paiz described the mansion as a “sanctuary” for the Ace Family.