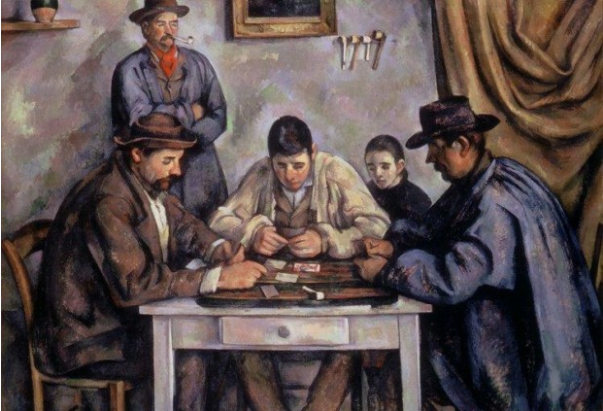 “The Card Players” World’s one of the most expensive painting ever sold.

If price of the paintings seem insane, well, it must be since “The Card Players” of Paul Cezanne hit the world record of most privately sold paintings in the world. For more than $250 million, Qatar’s Royal family bought none other than this temperamental representation of Aix-en-Provence peasants indulged in a card game. Nonetheless, with this purchase, the Qatar gets more than a post-impressionist masterpiece i.e. a ticket to enter the world’s exclusive club. There are four other paintings that belongs to this genre and are been preserved in Metropolitan Museum of Art in the Courtland, Musse d’Orsay and the Barnes Foundation.

Cezanne inspired Cubism, portraying abstract art and his painting sale actually took place in 2011. All the details of ‘The Card Players’ sale was kept secret to the world but later came out through V.I.P collectors, dealers and curators. In fact, the Royal family themselves never commented on the purchases made. However, the tight circle of auction, dealers and officials involved in had to sign confidentiality agreements that confirmed the sources about the prices and record purchase of “The Card Players”.

When you see the painting, first thing that comes in mind is it depicts Provencal peasants playing cards and smoking pipes. But, if you look closely, you realise that peasants still look real life like and the entire scene is quiet and full of concentration, like the real players do. In fact, when this painting was created, it is said that Cezanne’s model in the painting consists of men who worked for his family estate and before creating each painting, the artist created number of sketches to put them in a composition.

The card player subject is not new, but the difference can be seen in 17th century paintings that were full of hysteria, drama and reflected baroque energy. Similarly, this 20th century artist used motif that belonged to 17th century French and Dutch genre paintings which depicted card games played by drunken, rowdy gamblers in taverns. Cezanne paintings can though be differentiated in some ways especially in narrativizes and conventional characterization since none of the men are been seen drinking. Also, we do not see any money involved that were typical attribute of French and Dutch genre paintings.

Buy Here Pay Here – All You Need to Know

Incremental Cash Flow – All You Need to Know