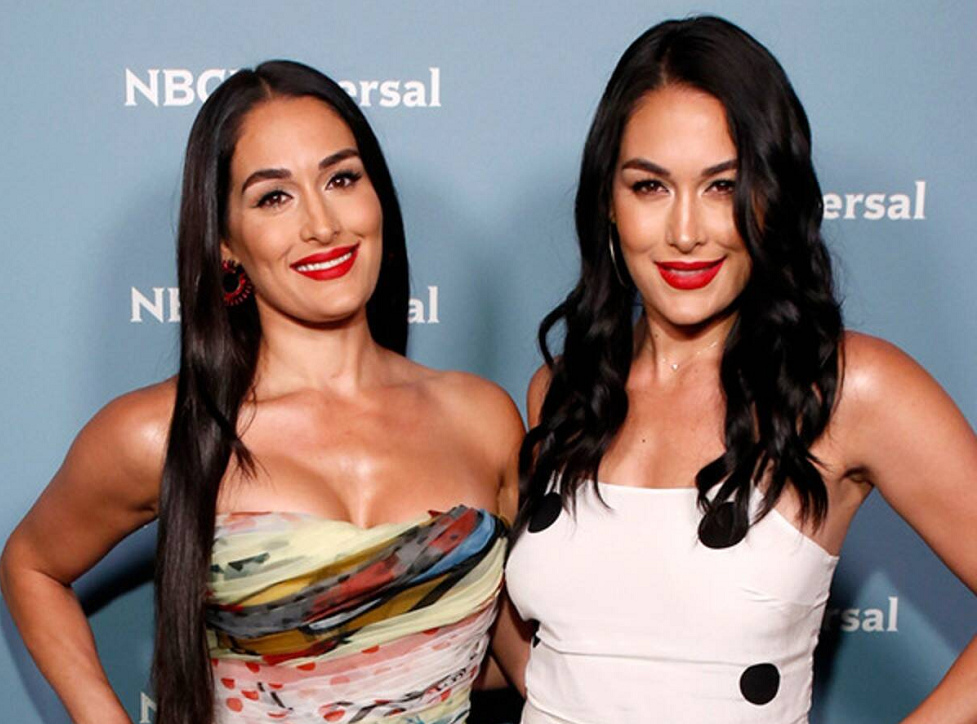 Our heartiest Congratulations to Brie Bella and Nikki Bella!

Born on 21st November 1983, Stephanie Nicole Garcia-Colace or Nikki Bella is an American born and a professional wrestler signed to WWE. She signed with World Wrestling Entertainment in June 2007 and was assigned to Development territory Florida Championship Wrestling with her twin sister Brie or Brianna Monique Garcia-Colace. Together they formed The Bella Twins and made a debut on Smackdown in November 2008. Nikki Bella is the two-time winner of WWE Divas Championship besides holding a record of living longest duration with that title.

At 36, both the twins revealed in front of social media about their pregnancy and are due only a week apart from each other. According to Brie, “People are going to think that’s a joke. We both are shocked. People are going to think we planned it, but you can’t really plan pregnancy!”. Nikki added to it saying, “It took even me a good week to come to terms with like, ‘Oh my gosh, I’m pregnant.’ I’m not ready for it.”

With a gap of sixteen minutes, the twin sister was born to parents Jon Garcia and Kathy Colace. The twins were born in San Diego, California and were raised in Scottsdale Arizona farm. Nikki has Mexican and Italian descent. She along with her twin sister played in the elementary school for Scottsdale club. After graduating from Chaparral High School, Nikki returned to San Diego for further studies and started playing soccer for Grossmont College. She was thereafter reallocated to Los Angeles and started working as a waitress in the Mondrian Hotel.

Nikki initially started modelling, acting besides doing various promotional jobs. Her first debut in television included shows like Meet My Folks and Fox Reality. Gracia twins were then hired by Budweiser for the World Cup Twins where they were seen holding a World Cup Trophy together. Nikki and Brie were contestants of International Body Doubles Twins Search in 2006 and later participated in WWE Diva Search, however, failed to make a cut.

On 29th August 2008, Brie Bella debuted their first episode of Smackdown and defeated Victoria. Brie quickly began a scripted rivalry between Victoria and her accomplice Natalya to get the series of match between them. In all the matches, Brie would go underneath the ring, rolling out and appeared revived along with winning the match each time. Nikki joined the ring later and attacked them. The first official match of the twin was aired on 21st November the same year in the episode of Smackdown where together they defeated Victoria and Natalya.

On 23rd April 2012, Nikki defeated Phoenix in one of the Lumberjill matches on Raw and won Divas Championship. However, Brie lost it during the match between her and Layla at Extreme Rules. The twins failed and lost their Divas Championship, keeping it with them for a week only. The twins made a great comeback again in 2013 with a new episode in the Raw. They were shown in the backstage with Team Rhodes Scholars. On 15th March, the twins attacked the Funkadactyls in one of the matches and the next week, they interfered in a match between Brodus Clay, Tensai and Team Rhodes Scholars. Being attacked by Funkadactyls, the twins made an in-ring return and defeated Funkadactyls on March 27.

The Bella twins made a debut in reality television shows, Total Divas aired in July where they indulged themselves into an argument with Natayla. The Total Divas was thereafter transformed in a scripted argument with Divas Championship AJ Lee. On September 15, Night of Champions was showcased in which Brie challenged Lee for Divas Championship in a four-way match. Nikki returned on October 25 with an episode of Smackdown and lost to Lee. The twins performed for Survivor Series on 24 November and became a part of the Divas Championship at Wrestle Mania XXX which they failed against Lee. In 2015, an episode aired on 14th September of Raw, Nikki defended her lost title from Charlotte who pinned Brie in earlier matches where the twins had tried to make a switch between the match. Nikki was able to retain the championship as the title cannot be changed due to disqualifications and this process became sensational. The twins became the longest-reigning Divas Championship in the history of wrestling after AJ Lee’s previous record of keeping the championship for 295 days.

Brie Bella is a mother of two years old daughter Birdie from her husband and pro wrestler, Daniel Bryan. According to Brie, Daniel was pretty shocked to know that Brie conceived shortly after having her first baby. Brie shared with media, “My husband and I were trying for seven or eight months, but then I felt in my heart it was a sign from God, like, ‘You guys are good with one,’ so we stopped trying,”. When the couple were at France while meeting Artem’s family, she felt a kind of pinch in her stomach and irritated. When she went home and took a test, she saw a positive sign and was like, ‘Oh, s**t’.

Nikki Bella had another story altogether. She and her new fiancé Artem Chigvintsev were not trying, however, had a feeling about being pregnant. Nikki and Artem were partners in the 25th season of Dancing with the Stars 2017. Artem is a professional dancer who appeared in the show for the last eight seasons. Although Nikki Bella and John Cena were engaged at that time, the couple separated and she and Artem were linked in January of 2019.

According to Nikki, “I was in yoga, and I kept getting this feeling that you need to take a pregnancy test, but I wasn’t even late yet,”. The couple got engaged last year during a romantic trip to France. Since the twin sisters share everything from WWE titles to birthdays, they say that they are similarly experiencing pregnancy symptoms. In one of the interviews, Brie Bella said, “It’s actually crazy because we both have the same symptoms. So, we’ve been super nauseous.”

Although both the twins are facing “hangovers”, Brie Bella and Nikki Bella are grateful for the way things have turned for them.