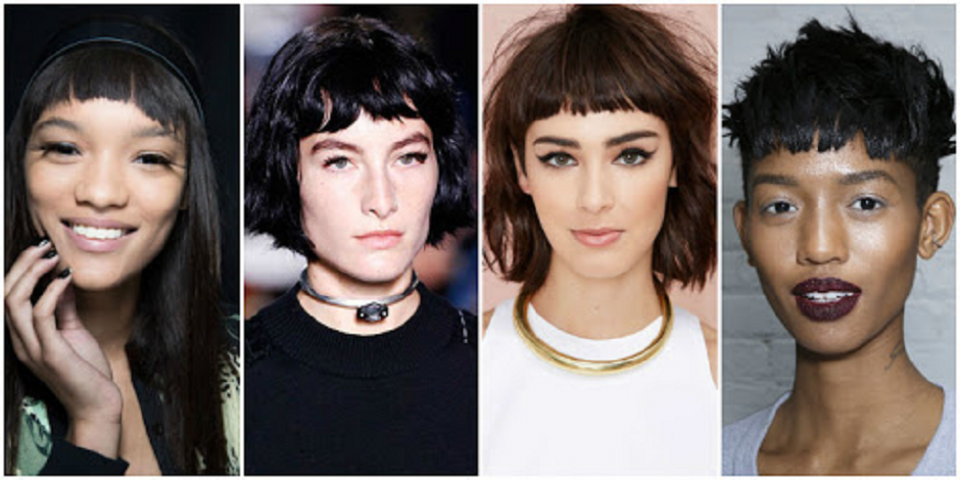 Women who get bangs are much more complicated than they seem- or are they? For many women, hair is an extension of identity, and cutting it off ( especially the front half) can feel like shedding an old persona that just doesn’t fit anymore and you can’t hide your face anymore. A wide range of blog posts describing the ”emotional stages of getting bangs” reveal fears of judgement, or being perceived as someone who’s too spontaneous, jumping in and out of trends or an identity crisis. Bangs can be cathartic, and they can result from a bad decision we take at 3 am to get rid of our old identity. Plenty of women have had to live with bad haircuts that happened during a panic, and there’s nothing wrong with that. Because the truth is that great women inspire a good haircut like the terf bangs.

Bangs represent a variety of different identities, many of them aspirational figures and projections of who women might want to be, but they don’t always have to be a metaphor for an emotional state or flimsy sense of self. With every kind of bangs from history on offer, we have decided to help you figure out which kind of terf bangs girl you want to be.

Which Kind Of Terf Bangs Girl Are You?

What are terf bangs?

Bangs were known as  adorably quirky and impossibly girly— characteristics that also happened to define the “crazed pixie dream girl” cliche that took hold of pop culture during this same time period. But bangs never lost their unfortunate reputation. Tiny, close-cropped baby bangs once found primarily on art school students not to mention little children and French indie film stars are now known as “TERF bangs” — referencing the internet term “trans-exclusionary radical feminist”. Not all TERFs have the terf bangs, and not everyone with tiny bangs like Emma Watson is a TERF, though their association with a hateful ideology essentially ruins tiny bangs for everyone who isn’t a TERF.

On the internet, any celeb that seems to chop off their hair not only becomes a semi-political meme but also an analogy for mental health status. “Personally I believe wanting bangs is almost never about wanting bangs and if u want bangs u should go to therapy first,” stated one writer who tweeted back in 2018.

Bangs are loaded with so much meaning, and so many cultural ideas about the type of women who wear bangs, is blindsided by the notion of an identity crisis — like the kind that follows a particularly terrible breakup. It’s unclear when or where “breakup bangs” first originated, but they’ve become the cliche symbol of desperation and post-breakup mental health breakdowns playing into the well-established idea that bangs happen when women with any lack of self control and impulsive are left alone with a pair of craft scissors.

The Harry Potter star’s hairdo is being referred to by some as “terf bangs” – as in, a look synonymous with ‘trans-exclusionary radical feminists’.

UK tabloid The Sun has apologised to Watson in a headline for a recent story that compared her look to “the one your mum used to trim with a pudding bowl”.

“First Emma Watson went for the chop and then the likes of Emma Roberts and Alison Sudol have followed suit… [cutting] their hair so short that they have tiny tufty tresses on their forehead…”It seems the world has a split opinion on the micro-fringe trend… it would be fair to say that we are struggling to embrace the tuft trend.”

Other publications are less negative, with Teen Vogue calling the look “so now”. Oh how wrong they were!

“Though she’s had a pixie cut in the past, the new bangs are choppy and rest about halfway on her forehead which is quite the departure from the long locks we’ve seen on her over the last five or so years,” writes Alyssa Hardy.

“If you want to get bangs, feel free to take Emma’s selfie to the salon with you.”

Emma Watson’s baby bang is just rustic and adorable! Check out the rest Spring hairstyles that we should try: https://t.co/9NWO1V1bwX

One of the oldest icons of the Middle Ages, Joan of Arc is considered a heroine of France for her role during the Lancastrian phase of the Hundred Years’ War, when she claimed to have received visions instructing her to support Charles VII and recover France from English domination late in the Hundred Years’ War. This Middle Ages icon has remained a popular figure in literature, painting, sculpture, and other cultural works since the time of her death, and many famous writers, playwrights, filmmakers, artists, and composers have created, and continue to create, cultural depictions of her.

The depiction of Joan of Arc, is this strong fierce soldier but the earliest rendition of Joan of Arc that survives is a doodle in the margin of the parliamentary council register drawn through memory by an artist Clément de Fauquembergue. The entry is dated back in 1429 and Joan is shown holding a banner and a sword, but she is wearing a dress and has long hair. Fauquembergue, drawing from his imagination, may be excused for putting her in women’s clothing, but long after Joan’s dressing practice was well known, many artists still preferred to dress her in skirts.

But fiction aside, Joan referred the court to the Poitiers inquiry when questioned on the matter of her hair. The Poitiers record no longer survives, but circumstances indicate the Poitiers clerics had approved her practice. She also kept her hair cut short through her military campaigns and while in prison. Her supporters, such as the theologian Jean Gerson, backed up her hairstyle for practical reasons, as did Inquisitor Brehal later during the appellate trial.

Emma Roberts became a meme for her terf bangs in 2018. Emma Roberts walked the red carpet at the Critics Choice Awards and her hair was a huge topic. Emma’s hair is almost definitely a tiny little wig (you can literally see her hairline underneath…), but that hasn’t stopped people roasting her on Twitter.

Beyoncé’s bangs, like most things about famous women, went so viral that Twitter predictably went into meltdown when the singer showed up at a Paris station wearing super-short, pinup-girl bangs. The magic of famous, beautiful people is that they can wear anything—velour pink tracksuits or dumpy white T-shirts or matching outfits with the rest of her girl group—and make it work.

When you see something in a magazine and say, “I wish I could pull that off,” Beyoncé can pull a French look whether she was visiting Paris or not. She’s out there taking the risk for you, and probably without even having to actually cut your bangs. Like her you can also also wear a terf bang wig and her bangs are most likely a wig.

Beyoncé has donned dozens of different hairstyles in her videos alone . . . why wouldn’t we want one of our most beautiful, effortlessly glamorous women to take this kind of risk? Taking the kind of risk few people seem to be willing to go near anymore, Beyonce once again proves herself to be fearless and fierce!

Anytime is a good time to talk about how Courtney Cox’s hair defined her character in Scream. Her role was a rather contentious topic among fans of slasher thrillers. On the other hand, many believe that the film was just lost in the post-2000 shift in horror aesthetics in Hollywood. Either way, fans of the franchise and haters have now engaged in the most controversial hairstyle due to COVID 19.  A running gag on the trend related to Courteney Cox’s bangs was that amid the coronavirus-induced quarantine, many who were cutting their own hair would ultimately have to find a way to rock these bangs! Fans have also tweeted:

“Scream 3 is trending. Are you guys just going off on Gale’s bangs again? Why do yinz pretend she’s less of a total babe and absolute bad b***h because of the bangs? I’d still thank her for punching me in the face.”