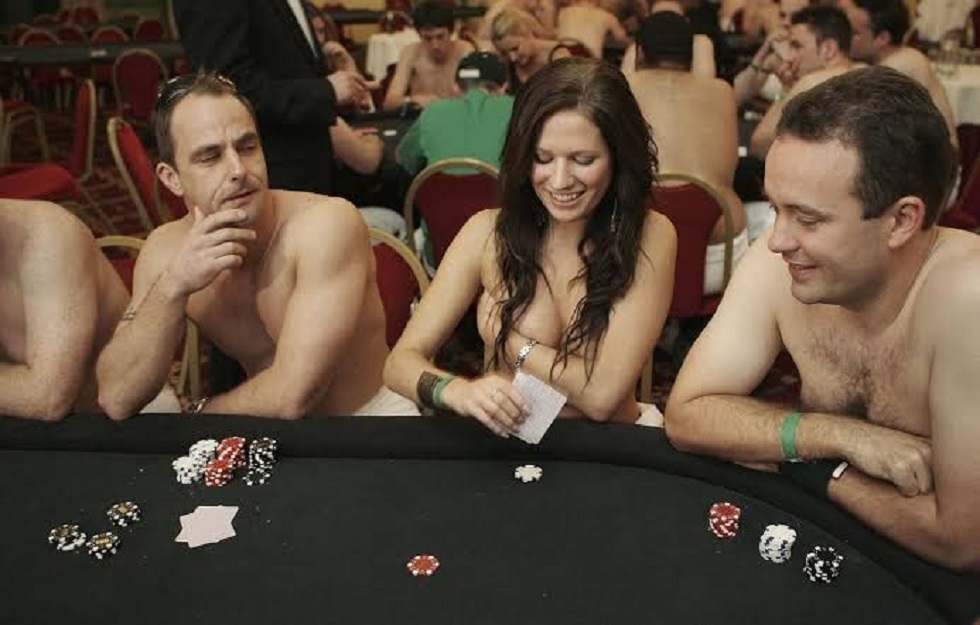 Strip Poker is an exciting and sexy party game where the losers of each round have to remove an article of clothing. This version of poker is generally used to increase the sexual tension in the room, however, the game itself is not sexual. At no point of time during a strip poker game, are the players supposed to engage in any kind of sexual activity. They are not required to perform any kind of sexual activity as a part of strip poker rules. In this post we will talk about the things you need to know so that you can play the titillating game of strip poker.

Strip Poker: All you need to know

The first thing you should know, is that any version of poker can be converted into its strip poker form. However, the simpler versions of poker with fewer betting rounds (such as Texas Hold’em or Five Card Draw) are most famous for strip poker. Since strip poker is more of a fun game than traditional poker, the rules tend to be a lot more flexible. However, you must follow a certain set of easy to follow guidelines at the start. It’s still a game after all, not an orgy. Some of the simple rules would define what actually constitutes as ‘stripping’. Removing your socks will count as stripping your clothing. However, removing your belt, glasses or shoes might not be acceptable as ‘stripping’. Another useful rule to follow is to restrict the amount of clothing that is on each participant at the start of the game. If you don’t want your strip poker game to last for an endless number of hours, ensure that participants don’t have more than five items of clothing.

How to Play Strip Poker?

There are three main ways to play strip poker games: For the quick version, each player shows their best 5-card poker hand at the end of each hand. The player in possession of the best hand doesn’t need to remove any clothing item. Everyone else needs to remove one item of clothing. This pattern repeats every hand and everyone except the player with the best hand removes an article of clothing. The player who ends up naked first, is the loser. This is the most common and quick way to play strip poker. If you want to play at a slightly slower pace, you can make small changes to the rules. In a medium paced version, only the player with the worst hand needs to remove an item of clothing. This game takes longer to finish for obvious reasons. If you are interested in an even slower version of strip poker, you can choose to play it like a normal poker game with chips. Players can bet an item of clothing in case they want to continue in a hand. This version of the game, especially if it’s played by good players takes a long time to get even a single person naked.

What are some alternative ways to play Strip Poker?

Other alternatives can be added to basic strip poker games such as some Truth or Dare. In this version you can make up for lost chips by combining Truth or Dare and items of clothing. Each player can fold at any moment but, depending on the rules you set, whomever folds may have to pay in the form of a Truth and/or Dare. At the end of the hand the winner decides what Truths or Dares the losers have to do to save removing an item of clothing. The people who have put their clothes on the line, can choose which clothes to take off.  A removed item of clothing can’t be worn again. In the situations of players ending up naked, they can only continue playing if they pick truth or dares.

In case you are looking towards sizzling up your party night with friends a little by organizing a strip poker game, here are some tips that will help you:

Tensions will be high, no doubt, but you’ll certainly enjoy your night. Have fun and may the best person win … or lose, depending on how you see it.

When you hear the words “strip poker” your mind probably starts to race. You might even start thinking about crazy nights in years past in private or special clubs with your partner or with (very) close friends. For all we know, you might even use strip poker as a kind of foreplay to spice up your sex life. Have you ever wondered about the origins of strip poker and how entrenched it is in our pop culture? Do you know that actual strip poker tournaments are held worldwide?

Strip poker was born alongside the game of poker itself

Strip poker is one of the numerous variations of poker (definitely the raunchiest). Poker is probably the most popular card game in the world but its origins are not really clear. The scenario is the same with strip poker. According to Wikipedia, strip poker was born in New Orleans at the same time as poker itself (around the 1830s). But it’s obvious that poker as we know it is the end result of a long evolution and there’s no consensus about its origins. Some think that the ancestor of poker came from 10th century China, others say 17th century Persia or even 18th century Europe. What we know for sure is that most classic poker games in America developed aboard the steamboats of the Mississippi River before conquering the Far-West saloons. Strip poker was probably born around that time. However, many have argued that the first time the words “Strip Poker” were explicitly used, was in 1916.

No more tar and feathers

Strip poker started with just men playing the game against each other. During the Great Depression, the term “mixed strip poker” rose to prominence. As you might have guessed, this was the version of strip poker played by both men and women. In this version, players without chips could also keep on playing with the risk of ending up naked. Strip poker was initially played in “unofficial casinos” only. Those places usually tended to be brothels. That was a great contributor to the rise of eroticism associated with strip poker. Despite popular belief, strip poker wasn’t just a secret game played in a basement by a handful of people, it was usually a public affair. A naked player in a strip poker venue was as common as seeing tar and feather covered cheaters.  Nowadays, there are no more tar and feathers and strip poker has become a party game played during a social gathering to lighten the mood, enable interactions and get to know people more intimately. For all the poker enthusiasts living in Pennsylvania, these are some of the best casinos in PA.

Strip poker works with any type of poker but, as mentioned earlier, Texas Hold’em or 5-Card Draw are by far the most common.

Today, you can even order a designated strip poker playing set from amazon. For example Cissia Schippers’ Kamapoker, which mixes poker and the Kama Sutra, was recognized by sexologists as a tool that “helps players own their desires and fantasies, communicate better and make sexuality a more mundane part of their personal lives.” If you’re too shy for board games with actual people you can ;play strip poker “alone” with your gaming console. However in this game, only virtual opponents end up getting naked. Various game editors on Apple II, Amiga, Atari, Commodore and even Nintendo NES created (official or unofficial) licenses as early as the 80s. These are the very first erotic video games. From A Sizzling Game of Chance (1982) to Strip Poker Professional (1994) or Peek A Boo Poker(1991) and Gameloft’s Sexy Poker (2004), the choice is yours and the differences in graphics can be spectacular. A lot of highly ambitious men’s magazines like Playboy and Hustler made their own online strip poker site. These endeavours failed miserably though.

If you’ve paid attention over the years you know that strip poker pops up in some unexpected places in American pop culture — even in black and white movies. 1928’s Road to Ruin, starring Helen Foster, was one of the first controversial movies featuring strip poker. It follows the dissolute life of an uneducated woman: smoking, drinking, sex before marriage, prostitution and abortion are all tackled. There’s even a strip poker game to emphasize the declining morality of the main character. In the updated, speaking version (made in 1934), strip poker was replaced by a “strip dice” game. In 1932, the Bette Davis political satire The Dark Horse featured Presidential candidates being discredited via the means of a strip poker game. In 1940, the teenagers in Mad Youth enjoyed some wild strip poker games while their parents played bridge at the club, boasting about their kids’ wholesome qualities. Strip Poker’s popularity started rising wildly in the 1950s. Its increasing popularity in America was one of the factors which led to the sexual revolution in the 60s. The 1971 Milos Forman movie, Taking Off featured some memorable and exciting strip poker scenes. Popular TV shows such as Friends and Three’s Company have also featured strip poker scenes.

In 1999 there was even a strip poker tournament with about 100 players organized by the Naturist Association of Estonia. The winner still had her socks on. What started as an April’s Fools joke became reality in 2006, however, with the biggest annual strip poker tournament in the world organized by Paddy Power Entertainment Ltd (Ireland). After an online poll showed that 50% of poker players played naked at home, Paddy Power toyed with the idea of a strip poker tournament as a joke. The grand prize for the winner was supposed to be a gold vine leaf with Paddy Power Poker marked on it. The winner would also win an all expenses paid trip to Cayton Beach, England. It is one of the largest nude beaches in the world. After receiving overwhelming support and interest from many players, Paddy power went on to organize a strip poker tournament for real. Dubbed the World Strip Poker Championship (WSPC PaddyPower), it was held on August 20th, 2006 in London’s Cafe Royal. A total of 196 poker players participated in the tournament. On top of the regular rules of poker the list of clothes one was allowed to discard was very strict: each player was to start the game with five items of clothing provided by the organizers. Each player also got a towel on which to sit and with which to cover themselves once they were naked … but only after the jury could see they were actually naked! In the end, John Young, a British freelance journalist, won around $16k, a vine leaf trophy and an entry for the Irish Open. Fair play to Paddy Power who also offered the same prize to a cancer research association.