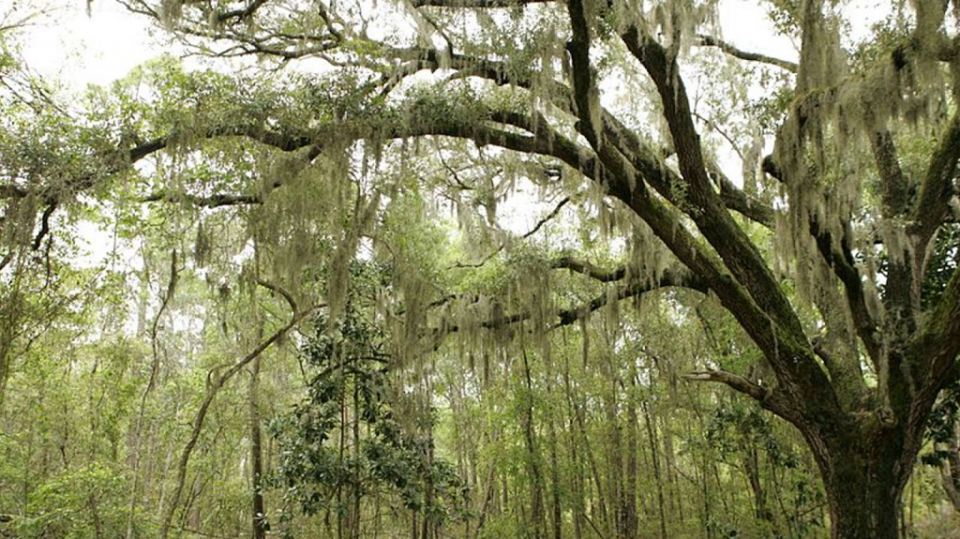 Spanish Moss (biological name: Tillandsia Usneoides) is an epiphytic plant (a plant that does not need soil to live, since it grows suspended on the branches of trees). It is native to the Americas. Spanish Moss can be found in the southeastern United States, Mexico, Central America, and South American countries such as Colombia, Argentina, Ecuador, and Peru. It develops on trees, in places with hot climates with high humidity. In their natural state, they can be found in situations of sun or partial shade. Generally, Spanish Moss is not harmful for the tree where it develops, since it is not a plant that absorbs nutrients from the tree, but if it is highly developed it can hinder the photosynthesis of the tree by preventing sunlight from reaching it. Usually, Spanish Moss is more popular for its beauty and the way it can enhance any tree’s beauty. Spanish Moss is also known as “Old Man’s Beard”. Let’s find out more about it.

Spanish Moss: All You Need to Know

What is Spanish Moss?

Spanish Moss develops in a hanging shape, it is similar to long strands of silver hair, it has long, thin and flexible stems on which very thin and short leaves of about three centimeters in length develop, they are silver or gray in color with a curved shape. Its hanging shapes can measure more than one meter. Sometimes it can measure more than three meters in length.

Where does Spanish Moss grow?

Spanish Moss can be grown outdoors, in hot climates with winter temperatures above fifteen degrees. Better in partial shade situations, if the humidity is very high it can be placed in full sun. It is very popular as an indoor plant, people place it near a window with good lighting but away from direct sun. It can be attached to a piece of wood branch or to some other support by means of a wire.

Is Spanish Moss a flowering plant?

Spanish Moss does not usually flower, especially if we grow it as a houseplant. If it blooms in nature, it shows tiny green flowers in summer. Its flowers are not very attractive, the beauty of this plant lies in its silver color and its hanging growth.

Is Spanish Moss an air plant?

In their native state, they can be found in situations of the sun or partial shade. It is also usually known as an air plant, since it does not have roots. It absorbs the nutrients it needs from rainwater, sprayed water or from the environment, which is why it needs to be located in places with high humidity. It does not need fertilizer.

How to water Spanish Moss?

If grown indoors, Spanish Moss will need to be sprayed often and immersed in lime-free water for five minutes every two or three days with high temperatures. The frequency of this can be reduced in colder temperatures. If we grow it outdoors it needs to be sprayed daily in summer. During winters, it should be sprayed less frequently.

Should Spanish Moss be pruned?

It does not need pruning. Spanish Moss is not usually affected by pests or diseases. They reproduce by the division of plants and pieces of stem. In nature, the wind and birds help to reproduce, birds use it for the formation of their nests, carrying fragments to other trees. The wind tears off pieces of plants that hook onto other plants where they continue to develop.

Is the Spanish Moss an invasive plant species?

Spanish moss, while common in many southern landscapes, has a reputation for having a love/hate relationship between owners. Simply put, some love Spanish moss and some hate it. If you are one of the haters and looking for ways to get rid of Spanish moss, here are some steps.

It is important to note that while Spanish moss will not technically damage a tree, it can pose a threat as well as being an eyesore. Trees with Spanish moss can get too heavy when wet, which can strain the branches. As a result, the branches weaken and are more prone to breaking.

How to get rid of Spanish Moss?

There is no foolproof chemical treatment to aid in the removal of Spanish moss. In fact, the best way to kill moss is by removing it as it grows by hand. And even after complete removal, Spanish moss will inevitably grow back, or it may return after being carried by birds. With that said, you can typically slow the growth rate of Spanish moss simply by providing adequate fertilizer and water to your trees.

Since it can be such a painful and time-consuming job when it comes to killing Spanish moss, it is probably best and worthwhile to call in an arborist or other tree professional to do the job for you, especially for larger trees.

In addition to manual removal, the most cost-effective method of controlling Spanish moss is to spray the trees with herbicide. Again, professionals are the best options for this as they are better equipped to handle and spray large trees that would not be feasible for the typical homeowner.

What kind of sprays are used to control Spanish Moss growth?

Generally, three types of sprays are used to kill Spanish moss: copper, potassium, and baking soda. While all are reasonably safe to use and can even provide added benefits, some can also present challenges.

Copper Sulphate is one of the most recommended methods for removing Spanish moss. Copper is a common ingredient in most dry fertilizers and is an antifungal treatment. With that said, precautions should be taken when using this method to remove Spanish moss.

Copper is the slowest solution, but it is the most complete. As a systemic spray, it is considered effective in attacking and killing Spanish moss. However, copper-based sprays can damage tender tree growth, and any overspray can become potentially damaging to the surrounding landscape. It is recommended to spray trees before they sprout or later in the season.

This is an ideal solution to use in more open areas as well, rather than near houses because it has a tendency to stain. You should also check the label to make sure it can be safely applied to your desired Spanish moss trees. You can purchase premixed copper sulphate sprays or mix your own using one part copper sulphate and one part lime per 10 parts of Water.

Using potassium to spray trees with Spanish moss is another method that quickly kills this bromeliad. Potassium is considered a contact killer. So for example, if your tree is sprayed in the morning, the Spanish moss should be dead that afternoon, or in a couple of days for sure. While potassium kills moss, it will not harm your tree. In fact, it is a root fertilizer that is beneficial to the tree.

Before use, it is recommended that you physically remove as much moss as possible and then spray the affected trees.

The Easy Way to Find your Online Casino Destination