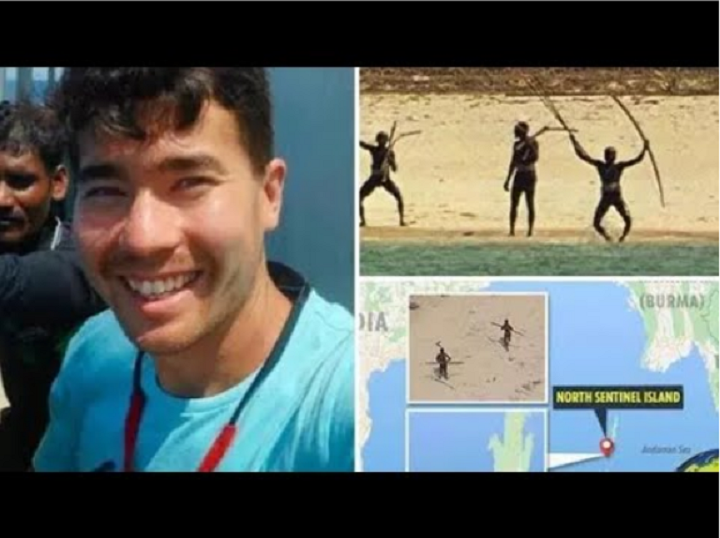 ‘God, I don’t want to die’- The last few words uttered by a young American tourist still echoes in the ears of people throughout the world making us all shiver imagining the sight when this innocent boy was killed mercilessly by a tribe of people living in an isolated island. Who have given them the right to claim an entire island and killing people mercilessly, breaking the law of nature?
John Allen Chau, aged 26 of America was an adventurer tourist who went out of his home country to introduce Christianity to the world’s isolated islands. It was when he decided to visit one of the most isolated land in the earth where stone-aged tribe dwells. According to the police officials, John perished on November 16 while he was attacked by Sentinelese tribesmen with bow and arrows.  From very beginning, these tribes have shown over possessiveness towards their island and remained remote to the worldly affairs.
North Sentinel islands of Eastern coast of India, in the Bay of Bengal has been all over social media since the day these Sentinelese tribes violently and consistently killed every people who came into contact with the island. Only a handful of people could set foot over the island who were protected by 5 nautical mile exclusion zone.

According to a recent report, the mother of the killed boy and a fellow missionary, John Middleton still believes that there might be some chances that John Chau still survives. According to them, since no credible witness was found and even his body being not produced in front of them, they still believe of his survival.
The only witnesses found were few fishermen who illegally ferried John Chau to the island and witnessed that the tribesmen dragged his body towards the beach and buried him under the sand on 17th of November. However, their vessel was moored hundreds of miles away from the seashore and thus their statement cannot prove substantial.
Officials from Indian police along with coast guards are continuously trying to find out and reconstruct John Chou’s movement to pinpoint the exact location of his corpse. They are even looking at the movements made by tribes from the sight of the boat where the fishermen stood and watched the assassination using binoculars. At least, they can get assured whether the murder actually took place or the fishermen made assumptions if the body is found.
After the third visit last month on the island, psychologists and anthropologists have been asked to join the search team and give advice on how they shall ask the search team to proceed with.
The Sentinel island is a restricted zone and taking visitors to that island is prohibited under the law. But the fishermen ferried John Chau to the island and therefore seven fishermen were arrested on the charges of breaking the law. Presently, the officials have no plans to face the tribe and says that let them be charged of murder alone.

According to the officials, any mission planned for making direct arrest of tribes can result in deaths from both the sides. According to the authorities, it is likely that the dead would be left behind similarly as the bodies of two poachers were left in 2006 when they strayed near Sentinel islands and have to pay their lives for it.
According to the Andaman and Nicobar Director General of Police, Dipendra Pathak, “They are human treasure, and we respect that,” the officer said that the community dwelling over there are very few in number ranging between 60 to 100 including men, women and children. They have no immunity against diseases and are exposed to every minor virus for which even a common cold could wipe the entire tribe within few days.
However, Chau’s friends and missionary fellows said that the absence of John’s body could be a good sign that the young boy must have lived and fled away, hiding somewhere in the island alive.

From the pages of a journal that was hand written by John Chau and the one who is believed to be killed by tribes dwelling in an isolated island of Bay of Bengal, it was found that the boy planned to visit the island again to keep attempting the conversation made between him and the tribesmen even after they pierce him with bow and arrow similar to the Bible he carried.
In his diary, John wrote, “I hollered, ‘My name is John, I love you and Jesus loves you,”. The pages of his diary were shared by his mother with Washington Post which was written after a member of the tribe shot him, as per the account.
The pages where he mentioned his conversation with the fishermen who facilitated his visit to the island clearly shows that he desired to convert Sentinelese tribe into Christianity. “Lord, is this island Satan’s last stronghold where none have heard or even had the chance to hear your name?” he wrote.
“God Himself was hiding us from the Coast Guard and many patrols,” John wrote.
There were clear indications in his writings that he was aware that his trip was illegal while he described how the fishermen transported him to the isolated island under the darkness and out of the range of patrols and policers. Nevertheless, his lead made all the seven fishermen arrested who facilitated such a dangerous trip.
While the boy was on board with fellow fishermen, he wrote one final note to his family, “You guys might think I’m crazy in all this but I think it’s worthwhile to declare Jesus to these people,” he added further “God, I don’t want to die.”