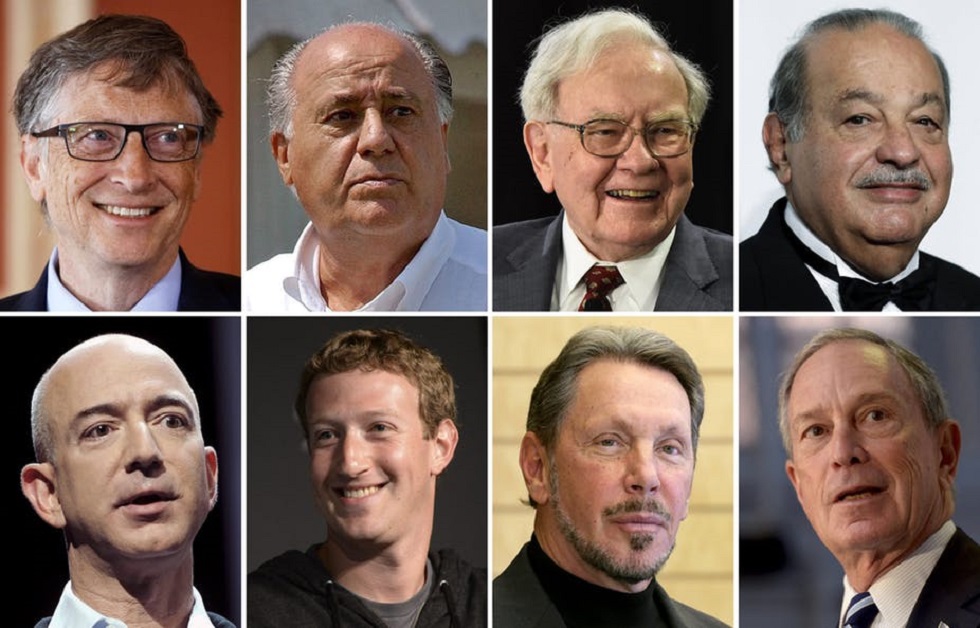 We’ve all heard fables about people who are so rich that they eat in gold utensils with a silver spoon; don diamond-studded clothes and live in a lavish villa. We’re not sure whether this is true or far from reality, but one thing is sure that uber-rich personalities exist in real.  Are you curious to find out the name of the people who have accumulated immense wealth? Then, here’s our list of the 20 richest people in the world.

Our list includes people who are influential; who’ve helped to change and re-shape the world. They all have particular traits in common including their innovative ideas and dedication towards their work. We have sourced the data directly from Forbes to authenticate our claim. So without further ado, have a look at our list of top 20 richest people in the world:

Jeff Bezos tops the list of richest people in the world. His e-commerce store Amazon was created in his garage in 1994 and is presently one of the largest companies on the web. Jeff’s net worth has increased by $5bn from October to amount to $115.5bn in the present. Apart from Amazon, Jeff has made a huge investment in space technology. He even established a newspaper under the name Washington Post. He takes pride in being the first man ever to reach the $100 billion mark.

Bill Gates has been consistent in featuring at Forbes list of richest people in the world for the past 20 years. He is the Founder of Microsoft, which is now the most prominent PC software company globally; though he has sold or gifted away much of his stake in the company. Presently, Bill owns just 1% of Microsoft and concentrates more on his philanthropic work. He also founded the world’s largest private charitable foundation.

Arnault can take pride in being the wealthiest European on the list. The Frenchman manages a franchise of reputable brands such as Louis Vuitton and Moet Hennessey. The Former is a trendy luxury fashion brand while the latter is champagne and cognac manufacturer. He merged the two brands into what is known as LVMH (Louis Vuitton Moet Hennessey). Just like other richest people on this list, he also contributed to a charitable cause by pledging over $220 million to help repair the Notre Dame cathedral in Paris.

Warren Buffett is the owner of a company called Berkshire Hathaway. The 90 years old billionaire is also called “Oracle of Omagh.” He is one of the most successful investors of all time. In fact, a massive number of traders look to him as a mentor and an inspiration. Just like his compatriot (Bill Gates), he has also pledged to give away over 99% of his fortune to charity. Till today, he still lives in the same house used to reside prior to being one of the richest people in the world.

Zuckerberg founded Facebook in 2004 at a tender age of 19 and presently, he is among the richest people in the world. Facebook is the most valuable and renowned social media globally with over 1 billion active users. He recently dropped in value because of the Cambridge data scandal rocking Facebook. Mark took Facebook in front of the public in May 2012.

Ortega was the chairman of Inditex, though he stepped down from his role in 2011. However, he still owns close to 60% of its shares. The company is popularly known for its Zara brand. The Spanish entrepreneur owns one of the famous clothing chains in the whole world. He is the wealthiest retailer in the world. Furthermore, has invested heavily in real estate business in Madrid, Barcelona, London, Chicago, Miami, and New York.

Next on our list of richest people in the world is Larry Ellison. He is the co-founder of the software firm known as Oracle. The firm was created in 1977 to tap into the demand for customer relationship management databases. He stepped down from the role in 2014, though he still acts as the chairman of the board and chief technology officer. He takes pride in employing over 136,000 people. Larry Ellison is committed to philanthropic service and he pledged $200 million to the University of Southern California for a cancer treatment center.

Larry Page co-established Google with business partner Sergey Brin in 1998. Together, they invented Google’s PageRank algorithm, which powers the search engine. He is a board member of the Alphabet (Google’s parent company). The company is one of the most successful search engines in the world and has also purchased YouTube.

Just like his business partner Larry Page, Sergey is one of the richest people in the world. He also stepped down as the President of Alphabet recently but remained a board member. He utilizes most of his time on Alphabet’s moonshot research lab X, which is the secretive Google X division.

The famous Indian business magnate is even one of the richest people in the world. Mukesh is the leading shareholder of Reliance Industries Limited (RIL). Aside from that, he is also the chairman and managing director of the company. His company launched a 4G phone service Jio in 2016 and can boost of over 300 million customers presently. Currently, he is the richest man in Asia.

Steve is the present owner of the NBA’s Los Angeles Clippers. He was previously the CEO of Microsoft from 2000 to 2014. He has a goal of eradicating poverty in America, which is why he has donated more than $2 billion into a donor-advised fund. The American businessman is married with three children.

Francoise Bettencourt Meyers is the current heiress of L’Oreal. She rose to the position after the death of her mother, Liliane Bettencourt, in 2017. Her father owns 33% of L’Oreal; thus, Francoise is the chairwoman. She is not only one of the richest people in the world but also the richest woman in the world. She also acts as the president of her family’s philanthropic foundation, which encourages French progress in the sciences and arts. The foundation has also contributed to the society together with the company by donating $226 million to repair Notre Dame Cathedral after the April 2019 fire.

At the age of 74, Michael Bloomberg is one of the richest people in the world. The American entrepreneur and politician is the founder and CEO of Bloomberg L.P. His Financial data and media company, which he established in 1981, is one of the famous companies worldwide. His Net Worth presently is estimated at $56 billion. He previously served as the mayor of New York City for three terms. He is also a cheerful giver as he has donated over $5 billion to gun control, climate change, and much more.

Jim Walton is the CEO of Arvest Bank. He is the son of Sam Walton, who was the owner of the biggest retail chain in the world ‘Walmart.’ Presently, he is on the Walmart board of directors. He and his family own about half of Walmart’s stock.

Alice Walton is the heiress to the Walmart fortune. She established the Llama Company in 1988. She has an interest in curating art and opened the Crystal Bridges Museum of American Art in 2011.

Rob Walton previously served as the chairman of Walmart after the demise of his father up until 2015. He is the eldest son of Sam Walton. He and others in the family still own about half of Walmart’s stock.

Ma Huateng is the founder of Tencent, which is the most valuable company in Asia. The company also created the popular social messaging app known as WeChat, which boasts of over 1 billion users. He is known for keeping a low-profile style.

Charles Koch is an American businessman who is the co-owner and CEO of Koch industries. His industries include process and pollution control equipment, polymers and fibers, minerals, fertilizers, ranching, and many more.

So these were the top 20 richest people in the world and Jeff Bezos continues to lead. The standard feature among them is that they’re self-made billionaires. And, these are the few people who inspire us all. We hope you had a good read!

Sell Your House Faster And Easier With These Pro Tips