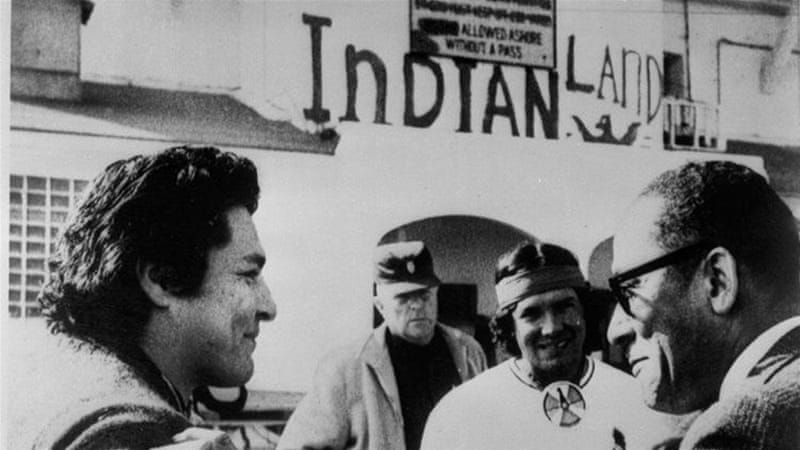 When you type ‘Richard Oakes Activist’ on the Google search bar, the results tell the story of a brief but glorious life. A flame that flickered briefly but brightly and in the process left a lasting light that illuminates the world even today. Even Google celebrated that remarkable human being by dedicating a doodle to Activist Richard Oakes. As far as the frontrunners of the 1960s Native American rights movement go, very few names carry as much reverence and relevance as Richard Oakes. As you delve deeper into your search results for ‘Richard Oakes Activist’, you will find out that inn an era where different ethnic groups in America had started their fight for equality, the original inhabitants of the continent were being criminally ignored. Activist Richard Oakes and his companions worked tirelessly to publicize the cause and plight of the Native Americans. Oakes was a Mohawk Native American activist who was instrumental in the inclusion of Native American studies in national university curricula and the change in the US Federal Government’s termination policies of Native American peoples and their culture. The 19 month long occupation of Alcatraz Island was led by Oakes and it is widely credited as the harbinger of unity among different Native American tribes.

Who was Richard Oakes: Activist?

Born on May 22, 1942, activist Richard Oakes, like most of his ancestors, spent most of his childhood fishing and planting beans around Akwesasne in the St. Regis Mohawk Reservation, a US-Canadian reservation across the St. Lawrence River. He was born and raised in the Mohawk tribe, a proud group of people with a long history in America. The Mohawks were one of the five members of the Iroquois Confederacy, an alliance between the Native American peoples which existed at least a century before Europeans colonized North America. During the late nineteenth and early twentieth century, the US Federal Government had overwhelmed most Native Americans and forcefully acquired most of their territory. The Native Americans were ravaged by the plague of endless wars and unknown diseases brought by the white settlers. They were stripped off their ancestral lands and forced to live in much smaller areas ‘reserved’ for them.

These reservations were little more than impoverished ghettos filled with poverty and despair. Education and employment opportunities were few and far between. All the schools were run by white administrators and teachers who showed a complete disregard towards Native American history and culture. Future activist Richard Oakes dropped out of his school in the eleventh grade and got his first real job at the docks of the St. Lawrence Seaway. However, he was laid off at the age of sixteen and forced to look for a new job. He moved on to a job as a high steelworker, a job which required a lot of travelling. He walked into a long and illustrious history of Mohawk men working in the steel and ironworks industry, building skyscrapers across the country. From the late nineteenth century, Mohawk men had proven their dexterity in high steel construction and worked all over the country, sending money back to their families on the reservations.

Where did Richard Oakes: Activist study?

His job took him to Newport, Rhode Island. This is where he met his first wife, an Italian-English woman from Bristol, Rhode Island. The marriage resulted in the birth of activist Richard Oakes’ son, Bryan Oakes in June 1968. However, the marriage didn’t last very long and the family broke up soon. Richard Oakes divorced his wife and left his son behind as he travelled to the west. Upon reaching San Francisco, he enrolled at the San Francisco State University. To support himself financially during his education, Richard Oakes worked in the Mission district of San Francisco as a bartender. Working in such a socially active environment helped him interact with people from the local Native American communities.

Future activist Richard Oakes wasn’t really thrilled with the classes offered at the San Francisco State University. So, with the help of an anthropology professor, he ended up creating one of the first Native American Studies departments in the country. He was seminally involved with the development of the initial curriculum and encouraged many Native Americans to enroll at the San Francisco State University and study about their own history and culture.

Around the same time as Richard Oakes’ work with the San Francisco State University, the Mohawk National Council was established. The council travelled in troupes across the country and peacefully protested against the ongoing oppression and eradication of the Mohawk religion. The movement was given the moniker, White Roots of Peace. Oakes met the members of the White Roots of Peace during the spring of 1969. He was encouraged to stand up and fight for his beliefs during this meeting. His constant activism and pursuit towards the preservation and upliftment of the Native American peoples led to him gaining the support of many students on campus. 1969 proved to be a very eventful year for Oakes. He met and married Annie Marufo of the Pomo Nation. He also adopted all five of her children as his own. He also began the Occupation of Alcatraz in the same year.

Richard Oakes established an organizational council on the island immediately. Each resident of the island had a job in fields such as sanitation, education, security and cooking. However, within a year of the occupation, the island started falling into chaos. Yvonne, Oakes’ adopted 12 year old daughter fell to her death on January 5, 1970. Richard Oakes and his wife Annie Marufo departed from the island after her funeral. In June 1971, the US Government removed the final 15 occupants of the island.

How did Richard Oakes: Activist die?

While Richard Oakes might have failed in retaining control over the island over the long run, he did enough to lead to the demise of the US Government’s policy of the termination of Native American tribes and the establishment of a new policy of self-determination. Unfortunately, Oakes was shot and killed soon after the Alcatraz Occupation. He was shot in Sonoma, California by Michael Morgan, an alleged white supremacist and YMCA camp manager.

Why was Richard Oakes: Activist assassinated?

Morgan alleged that he shot in self defence after being violently confronted by Oakes. Despite being charged with voluntary manslaughter, Morgan was eventually acquitted by the jury which decided that he had acted in self defence. Oakes’ followers still believe that it was a murder.

Where is Richard Oakes: Activist buried?

After his assassination, activist Richard Oakes’ body was taken to the Kashia Indian Reservation Cemetery at Stewarts Point in Sonoma County, California. Richard Oakes might have died at a very young age of 30 on September 20, 1972 but his legacy has lived on ever since.

How does the Theory of Constraints relate to Lean Thinking?