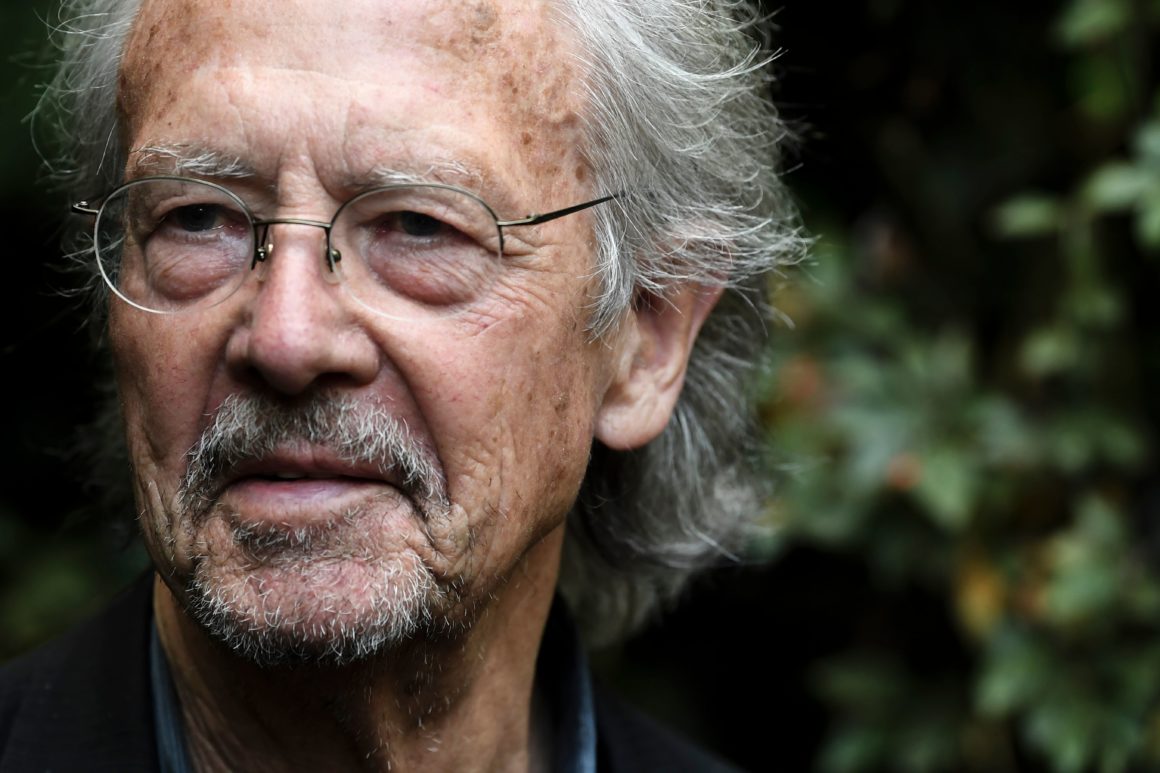 Austrian writer Peter Handke poses in Chaville, in the Paris surburbs, on October 10, 2019 after he was awarded with the 2019 Nobel Literature Prize. - Austrian Peter Handke, one of the most original German-language writers alive, who once used his famously sharp tongue to call for the Nobel Prize in Literature to be abolished, was awarded with the 2019 Nobel Literature Prize on October 10. The prize brings its winner "false canonisation" along with "one moment of attention (and) six pages in the newspaper," the novelist, playwright, poet and translator told Austrian media in 2014. (Photo by ALAIN JOCARD / AFP) (Photo by ALAIN JOCARD/AFP via Getty Images)

Who is Peter Handke?

Nobel prize winner Peter Handke is an Austrian novelist, playwright, translator, poet, film director and screenwriter. During the 1960s, he welcomed recognized for his work on a play (aptly named after you read about his controversies) Publikumsbeschimpfung which means Offending the Audience. Prompted by his mother’s suicide in 1971, the Austrian reflected about his mothers life in the novel he wrote called Wunschloses Unglück (A Sorrow Beyond Dreams).

Peter Handke held various highly controversial positions on matters such as the Yugoslav Wars. His speech at the funeral of Slobodan Milošević (a Yugoslav and Serbian politician who served as the President of Serbia from 1989 to 1997) was described as an apology for far-right Serbian nationalism.

Who was Peter Handke before he received the Nobel Prize in 2019?

Studying and Writing: While Peter Handke was studying, he got his break by establishing himself as a writer, joining up with the Grazer Gruppe (the Graz Authors’ Assembly) that was an association of young writers. This group published a magazine on literature which published Peter Handke’s early works. Group members of the Grazer Gruppe included Wolfgang Bauer and Barbara Frischmuth.

A Published Novel and Going International: Peter Handke went on to abandon his studies in 1965, after the German publishing house Suhrkamp Verlag accepted his novel Die Hornissen (The Hornets) for publication. In New Jersey, Peter gained international attention after an appearance at a meeting of avant-garde artists belonging to the Gruppe 47 in Princeton, New Jersey, in 1966.  Also the same year, his play Publikumsbeschimpfung (Offending the Audience) premiered at the Theater am Turm in Frankfurt, directed by Claus Peymann, and caused a sensation. Peter Handke became one of the co-founders of the publishing house Verlag der Autoren in 1969 with a new commercial concept, as it belonged to the authors. He co-founded the Grazer Autorenversammlung in 1973 and was a member until 1977.

Writing Scripts and Screenplays: Peter Handke has written several scripts for films. Peter directed Die linkshändige Frau which means The Left-Handed Woman. The film is that of a woman who demands that her husband leave and he complies. Eventually, time passes, and the audience falls asleep.”  Interestingly, the film was nominated for the Golden Palm Award at the Cannes Film Festival in 1978 and won the Gold Award for German Arthouse Cinema in 1980. Peter Handke also won the 1975 German Film Award in Gold for his screenplay for Falsche Bewegung (The Wrong Move). He paired up with director Wim Wenders in writing the screenplay for the 1987 film Der Himmel über Berlin (Wings of Desire), including the poem at its opening.

In 1999 before Peter Handke would win a Nobel PrIze he won another title. According to the Guardian, Salman Rushdie termed the guy an “International moron of the year” for his “series of impassioned apologias for the genocidal regime of Slobodan Milošević (a Yugoslav and Serbian politician who served as the President of Serbia from 1989 to 1997). The Swedish Academy’s decision to give Peter the Nobel Prize has been widely criticised in Albania and Kosovo, where an estimated 10,000 ethnic Albanians were killed and a populous of 1 million were forced to flight during a 1998 war waged by forces under Milosevic.

The Austrian screen writer and novelist whose Slovenian heritage had inspired in him a fervent nationalism during the Balkans war, had publicly and explicitly suggested that Sarajevo’s Muslims had massacred themselves and blamed the Serbians, and infact denied the events of the Srebrenica genocide. Seven years after Rushdie’s scorching condemnation, in 2006, he would also attend controversial president Slobodan Milošević’s funeral.

Yugoslav War: In 1996, Peter Handke’s travelogue published in English as A Journey to the Rivers: Justice for Serbia created controversy, as Handke portrayed Serbia as being among the victims of the Yugoslav Wars. In the same essay, Peter Handke also attacked Western media for misrepresenting the causes and consequences of the war. In the mid 2000s, Peter Handke’s public support of Slobodan Milošević, the former president of Yugoslavia who was indicted for war crimes by a UN tribunal for his role in the Yugoslav Wars, was considered controversial in the West, including Peter Handke’s delivery of a eulogy in Serbian at Milošević’s funeral on 18 March 2006.

When Peter Handke was awarded the International Ibsen Award in 2014, it caused some calls for the jury to resign,  as he was widely described by critics in Norwegian media as a fascist with ties to war criminals.

Nobel Prize 2019: According to the Guardian, Salman Rushdie reiterated his statements from the past. When it was announced that Peter Handke’s stood to win the 9m Swedish krona prize (£786,000), Salman Rushdie stated: “I have nothing to add today, but I stand by what I wrote then.”

The 2019 Nobel laureate was awarded alongside Poland’s Olga Tokarczuk was heavily criticized by observers and people who trusted the Swedish Academy. The Swedish Academy’s had commited to be less “male-oriented” and “eurocentric” when two European winners and only 15th female laureates had won in over 120 years. And in 2019, they quickly turned on their promise.

Moreover, an article published in the Swedish daily Dagens Nyheter, the head of the Swedish Academy, accepted that Peter Handke had made provocative, unsuitable and unclear comments in political questions.

But Dagens Nyheter said the author of “The Goalie’s Anxiety at the Penalty Kick” and “Slow Homecoming” had not glorified bloodshed and had clearly condemned the Srebrenica massacre. “The Academy … has not found anything in his writing that constitutes an attack on civil society or on the respect for the equality of all people,” Malm wrote.

The Swedish Academy quoted an article from a 2006 newspaper Sueddeutsche Zeitung from Germany in which Mr. Handke said the Srebrenica massacre was the worst crime against humanity in Europe since World War Two.

Sex Scandal: The Academy was forced to postpone the 2018 Literature prize after a scandal that led to the husband of one member being convicted of rape.

In April 2018, three members of the academy board resigned in response to a sexual-misconduct investigation involving author Jean-Claude Arnault, who is married to the academy board member Katarina Frostenson. Jean Arnault was accused by at least 18 women of sexual assault and harassment. He and his wife were also accused of leaking the names of prize recipients on at least seven occasions so friends could profit from bets. He denied all accusations, although he would later be convicted of rape and sentenced to two years and six months in prison.

In April 2018, the three members of the academy board resigned to protest over the decision by Sara Danius, the board secretary, not to take what they felt was appropriate legal action against Jean-Claude Arnault. On 10 April, Sara Danius was asked to resign from her position by the Academy, bringing the number of empty seats to four. Although the Academy voted against removing Katarina Frostenson from the committee, she voluntarily agreed to withdraw from participating in the academy, bringing the total of withdrawals to five. Because two other seats were still vacant from the Rushdie affair, this left only 11 active members, one short of the quorum needed to vote in replacements.

On 4 May 2018, the Swedish Academy announced that the selection would be postponed until 2019, when two laureates would be chosen.

On March 5, 2019 the Nobel Prize in Literature would once again be awarded, and laureates for both 2018 and 2019 would be announced together. The decision came after several changes were made to the structure of the Swedish Academy as well as to the Nobel Committee members selection, in order to “[restore] trust in the Academy as a prize-awarding institution”.

Albanian Prime Minister Edi Rama has accused the Swedish Academy of “diminishing the value of the prize” by awarding it to Mr. Handke.

Personal Life: Handke’s politics and comments have troubled his former friends and authors. Novelist Jonathan Littell stated : “He might be a fantastic artist, but as a human being he is my enemy … he’s an asshole.” Alain Finkielkraut stated: “he is an ideological monster”.

Susan Sontag who spent months in Sarajevo during the Bosnian war staging a performance of Waiting for Godot, said Handke’s remarks had “finished” when it came to his New York pals.

Biggest Gamblers by Country in the World