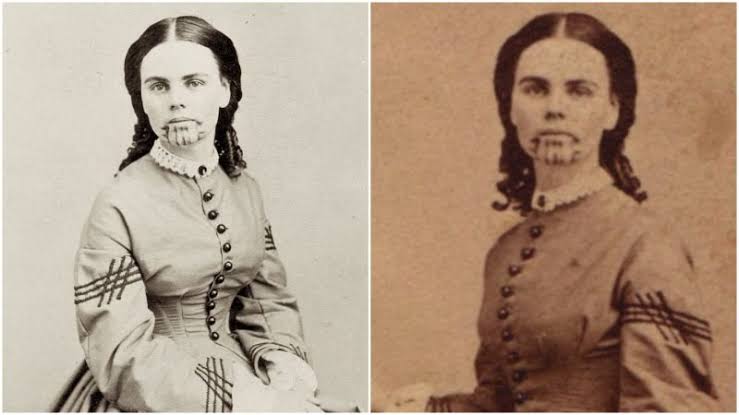 Who was Olive Oatman?

Over the years, the incredible story of Olive Oatman has been re-told countless number of times through speeches, novels, “memoirs”, poetry, play and movies. The Mohave people had marked Olive Oatman’s face with a blue tattoo and the media took a lot of interest in that as well.

Where did Olive Oatman live?

Olive Oatman was born to Roys and Mary Ann Oatman on September 7th, 1837. Olive Oatman had seven siblings and her family was a practitioner of the Mormon faith. In the year 1850, Olive Oatman, along with her family joined James C. Brewster’s wagon train. Brewster was a prominent member of The Church of Jesus Christ of Latter-day Saints. Brewster however, had major disagreements with the church’s leadership based out of Salt Lake City, Utah. This led to him breaking away from Brigham Young’s followers in Utah and leading his own followers (Brewsterites) to California, the ‘intended place for gathering of the Mormons.

On August 5th, 1850, somewhere around 85-93 Brewsterite migrants left Independence, Missouri. The journey was fraught with dissension and infighting, leading to the group splitting up in the New Mexico Territory (somewhere near Santa Fe). Olive Oatman’s father, Roys Oatman chose to go away from Brewster and took the southern route, going via Socorro and Tucson. As the group neared Socorro, Olive Oatman’s father took command of the group. Unfortunately for the group, it soon found out that the country and climate of New Mexico was completely unsuitable for their purpose. Pretty soon, the other wagons in Olive Oatman’s convoy completely abandoned their initial goal of reaching the Colorado river’s mouth.

What was the Oatman massacre?

Olive Oatman, along with her siblings and parents was travelling through the extremely dangerous indigenous territories without any other family accompanying them. On the fourth day of their journey, a group of Native Americans approached them, enquiring about food and tobacco. The seemingly innocuous encounter soon turned into one of the most violent and brutal attacks on the white community by Native Americans. Olive Oatman’s entire family except herself, her 15 year old brother Lorenzo and seven year old sister Mary Ann, were slaughtered. Lorenzo Oatman was brutally clubbed and left for dead while Olive Oatman and her sister were taken prisoners. Lorenzo Oatman woke up to the ghastly sight of his family members’ corpses but he soon realised that two of his sisters Olive Oatman and Mary Ann Oatman were missing. Somehow, Lorenzo Oatman managed to drag himself to a settlement and received treatment for his wounds. Three days later, he returned to the site of the Oatman massacre and buried the bodies of his family members. Since the site was made of volcanic rock, there was no way to dig up the ground for a proper burial. So the men accompanying Lorenzo Oatman built a cairn over the bodies after gathering them together.

When was Olive Oatman abducted?

After 1851’s infamous Oatman massacre, the Native Americans gathered the Oatman family’s belongings and enslaved Olive Oatman and her seven year old sister Mary Ann. Olive Oatman initially identified her abductors as Tonto Apaches. However, it was discovered later that her abductors were most likely the Tolkepayas (Western Yavapais) who lived in a village in the Harquahala Mountains, 8 miles from Aguila, Arizona. According to Olive Oatman, after she was brought to the Native American village along with her sister, she was treated in a very life-threatening way by her captors. Olive Oatman was almost certain that she was going to be killed by her captors. However, such a horrific tragedy never came to pass as Olive Oatman and her sister were mainly asked to perform menial tasks such as lugging water and food and foraging for firewood. Olive Oatman and her sister however, were frequently beaten up.

What is the meaning of Olive Oatman’s tattoo?

Olive Oatman and her sister were tattooed on their arm and chin as a part of the Mohave tribal custom. Olive Oatman however, claimed that the tattoos were supposed to mark them as slaves. A deeper look into Mohave traditions and customs contradicts Olive Oatman’s claim as the Mohave only tattoo their own people so that they can be recognised by their ancestors in the land of the dead.

When was Olive Oatman released?

At a time when Olive Oatman had turned 19 years old, Francisco, a Yuma Indian messenger arrived at the Mohave village with a message from authorities at Fort Yuma, regarding the rumours about a white girl living with the Mohave Indians. After initially being hesitant towards letting Olive Oatman go, the Mohave Indians eventually released her after they were threatened with total destruction. Blankets and a white horse were also offered to the Mohave Indians in exchange for Olive Oatman. In the year 1856, Olive Oatman was escorted to the white community of Fort Yuma by her Mohave friend and daughter of the village chief Espanesay. Oatman was clad in a Mohave skirt which only covered her from waist down and left her breasts bare. She was immediately changed into white people’s clothing upon arrival.

How did Olive Oatman die?

Olive Oatman married John B. Fairchild, a cattleman, in November 1865. She moved with him to Sherman, Texas and adopted a girl, Mamie. Olive Oatman died as a result of a heart attack on March 20th, 1903. She was 65 years old.

Where is Olive Oatman buried?

After her death, Olive Oatman was buried in Sherman, Texas’ West Hill Cemetery.