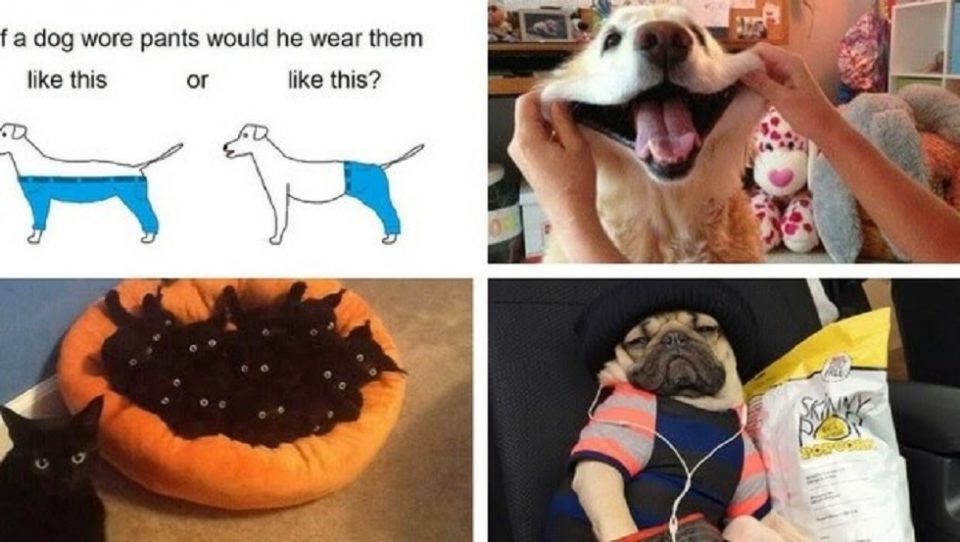 Have you ever googled the most important images on the internet? Some people are thrown off by this question because what’s the definition of importance in the realm of the internet? Also, what’s an image which is important to me might not be important to you. Is google playing tricks with our minds? So let’s take control of the AI we created and update ourselves with this knowledge.

I know it sounds serious, but in fact when you ask Google to show the most important images on the Internet, the results are perfect for a laugh. I guess the people who liked to look at these images have found a lot of value in this (and when you get into this, so will you). Yes, it’s totally surprising, depending on your sense of humour. Bored at school or at work? Check out this list for some much needed comic relief!

What Are The Important Images On The Internet? Here’s 11 Of Them:

Chillin like a villain, this pug is the definition of cool. Pepperoni pizza crackers, popcorn and star burst? He’s either at the movie theatre or at his own personal home theatre!  Does this image make one of the most important images on the internet? I don’t know, maybe the costume of this cute dog won the hearts of the people over!

The Most Important Image with a Question

Now this sounds like someone had a little bit too much to smoke, but fair enough, let’s play. Personally, I believe that we need to refer to people who dress up their dogs in cute costumes. The dogs who are cosplayed often wear their pants the second way. But just to be open minded to the second option, dogs could never wear pants the first way simply because they’d need a belt to hold it up. Agree or disagree? Feel free to comment your reply though.

According to Google, this is one of the most important images on the internet perhaps because it went viral?  It was created by a comic generator, explosm.net. Amongst the two people. one is curious while the other is a marketer. But what does the trash have to do in all of this?

Why is this one of the important images on the internet? Who knows! Maybe furry squirrels go to prom secretly and we just got on to this! This should be titled as the weirdest image on the internet! Do you agree?

Happiest Dog On In The World

Oh to be a dog! How easy is life when all you have to do is eat, sleep, play, repeat! That could be why this dog, who has plenty of stuffed toys, is the happiest dog on planet earth!

Is this toothless or a cat-version of toothless the dragon? Well, this proud mama’s baby fits perfectly into a halloween themed cushion cover, just like toothless did with his new wing!

Want to know why this is one of the seriously important images of the internet? Most people are stripped of common sense! If you look closely, the kittens are NOT real and the car isn’t a mother either. It’s just a stuff toy set- we got you!

Between the ranges of self actualization and food lies the realm of WiFi, I mean can we even exist without Wifi on the planet? Us meme fans, strongly believe that the speed of a connection can seriously affect our psychology as human beings of the modern world. I can totally see why this would be here on one of the most important images of the world!

Batman Is The Best

This is one of the most important images on the Internet. It’s like the little boy, who’s name in my head is Batman, is always ready with an eternal costume till he dies. Halloween, Birthday, Comic Con, Future Wedding- he’s always Batman!

Ever since February of 2018 till 2019, this image that Kylie Jenner once posted to Instagram of her new baby daughter’s hand holding her finger would go on to become one of the most important images on the internet.

It became the most liked Instagram photo with over 18 million likes.

Truthfully, it takes some Kardashian-level fame combined with a life-altering event like giving birth at such a young age to go this viral! Even if the image would get overtaken by so many other images, it still deserves a spot on this list for the length of time that it reigned.

The “Squatted for the Gram” Viral Reaction Image

In March of 2018, a Twitter user @Solo_Kalin posted one of her Instagram behind the scenes photo shoot outtakes as a joke. She just wanted to show the struggle of posing for a glamorous photo.

The image blew up all over the internet. The model was crouched over her knees in heels and pink sunglasses, appearing to squint in confusion at something in the distance.

After it went viral, it became the reaction image of choice for meme lovers and social media users looking to express their common feeling of exhaustion and disorientation while searching for something. This is me in the supermarket!

Is the internet even the internet without some cat memes? The crying cat also known as Schmuserkadser, is an internet meme featuring a teary-eyed white cat. The famous meme had once debuted on the internet back in 2014, but it started picking up major steam in 2018.

According to Google Trends, the Crying Cat trend had reached its peak late in 2018 but guess what? Cat memes are still going strong in 2020. The image itself is iconic and today you’ll find that it’s become the inspiration for many Photoshop edits posted across various social media platforms.

The Current Most Expensive Things on Amazon in 2022!

Diversity Visa Interview to America. What an Applicant Needs to Know