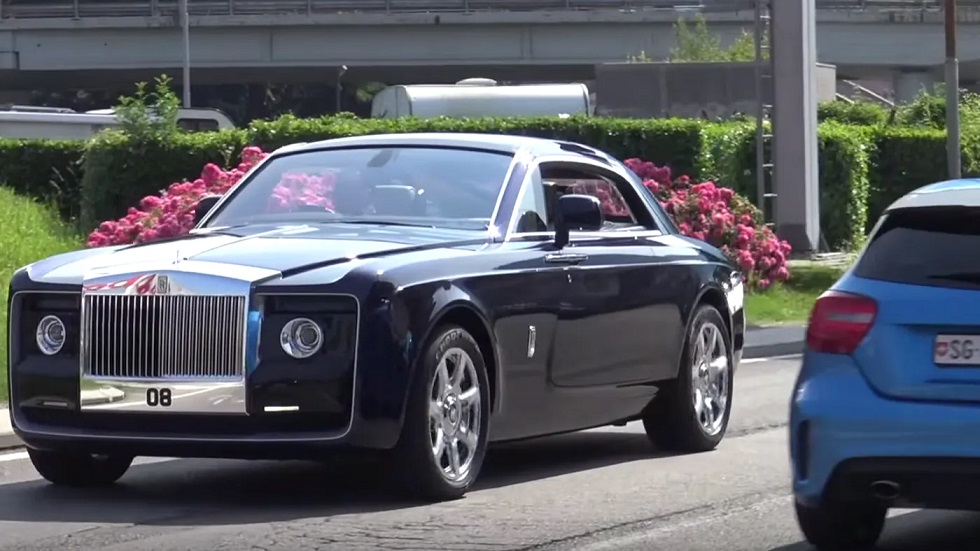 Do you fancy owning a luxurious car that makes you the talk of the town? If so, then you ought to glance at our list of most expensive cars to discover more about cars that are much more than merely a tool to commute. In fact, you’d be thrilled to know that the most expensive car costs 13 million dollars, and there are many others that are giving it a tough fight. So, settle down and go through our list!

High-end lavish cars are true statement makers! Truly, well-made cars exude a certain aura of their own. You are compelled to stop what you’re doing and take notice when a polished, sleek, high-power beauty makes its way. Bestowed to their astounding looks and lavish features, these cars come with mind-blowing prices.

Take a look at the 17 most expensive cars that exist in the world. We guarantee that they will sweep you off your feet and leave you feeling a tiny bit underwhelmed about yourself! Nonetheless, read on to admire the gorgeousness and state-of-the-art build of these rare makes.

Priced at a whopping $13million, the first spot is booked by the royalty that is Royce. If “drop dead” had to be explained with something in real life, we would pick this jaw-dropping beauty called Sweptail. This powerhouse is loaded with fantastic design and automotive engineering and is manufactured in the United Kingdom by, of course, Rolls Royce Motor Cars.

Other most expensive cars in the world

Featuring in the second place is a gorgeous masterpiece called Maybach Exelero by Mercedes Benz with a price tag of $8 million. It is classified as a sports car. This four-seater car comes with a twin-turbo engine of V-12 variety. Its top speed is 213 mph. The car featured in a Jay-Z music video and was purchased by singer/rapper Birdman shortly afterward. The Maybach Exelero was commissioned for testing the Carat Exelero range of tires produced by a German subsidiary of Goodyear.

Securing the third position in the list is Bugatti Divo pricing to $5.8 million. It is manufactured by the renowned Bugatti Automobiles. It is acknowledged as a mid-engine sporting car with an approach that’s highly focused on the tracks. Bugatti Divo pays homage to the French racer Albert Divo who had won the race of Targa Florio twice for Bugatti in the 1920s. It is claimed to be the most dynamic and agile car that Bugatti ever created. The top speed of Divo is blazing 236 mph. The dealers sent exclusive invitations to Chiron owners, where only a limited 40 units of the vehicle were sold prior to its official debut.

Following the Divo closely in the price range is the CCXR Trevita priced at $4.8 million. This car was so expensive to manufacture that its producer, Koenigsegg decided to limit the produced units to only two. Floyd Mayweather owns one of them. The car boasts of impressive features including carbon fiber finish with diamond weave; an Inconel exhaust system; a rare rear wing that’s made of double carbon; and brakes made of carbon-ceramic that comes with a tire monitoring system. Its top speed is 254 mph.

With just a small price difference with the Triveta, making it into the top five of the list is the Veneno Roadster by Lamborghini, costing $4.5 million. The car means “venom” in Spanish, which is precisely the kind of deadly vibe this killer beauty eludes. Inspired by the Aventador, the car first debuted in 2013 at the Geneva Motor Show as a celebration of Lamborghini’s 50th anniversary. Its manufacturing cost makes it one of the highest costing vehicles in the world. It can reach a speed of 60 mph in just 2.9 seconds.

This car is a street-safe rendition of the original track-only racing version called the McLaren P1 GTR. A British firm named Lanzante purchased the original version of the racing car and converted into this street model, for sale at $3.6 million.

Six units of this car were produced in total; five of which were sold to private owners and one codenamed into XP1 LM, and used for research and development purposes. The only difference between P1 and P1 GTR is a large twin-turbo V8 engine. This beauty can reach a maximum speed of 214 mph.

A Lebanese company called W Motors collaborated with the most exceptional Lebanese and Italian engineers to create this magnificent beauty called the Lykan Hypersport. Priced at $3.4 million, it was the first car to have its headlights encrusted with actual diamonds. Buyers could place a customized order to replace these diamonds with either rubies, sapphires or yellow diamonds. It has a 3.8-litre engine that is mounted with twin-turbo mid-rear. Its highest speed is 240 mph.

Bugatti Veyron priced at $3.3million is a limited-edition car manufactured by Mansory Vivere. It debuted at the Grand Sports Vitesse Roadster. Its features include an 8.0-liter W16 engine which produces a massive 1200 Horsepower. It is acknowledged as one of the speediest cars in the world. The highest speed of this car is 253 mph.

With a price tag of $3.2million, it is the only car in the list that’s a hybrid of various manufacturers. Aston Martin, a British manufacturer of automobiles; collaborated with Red Bull Racing and many other car producers to create this beauty. Originally made as a track-only racing car, it has now become the fastest-paced street-legal car around the globe. Only 150 units of this car have been made and sold. Tailored by Cosworth, its features include a 6.5-liter V12 engine that has a power output of close to 1130 Horsepower.

This car from Ferrari was designed as a concept car and was showcased for the first time at the Geneva Motor Show in 2013. The vehicle is named as a tribute paid to the former chairman of Ferrari and most celebrated automotive designers, late Sergio Pininfarina, who had died in 2012. Its design is based on the Ferrari 458 Spider. It comes with a price tag of $3 million. Only six units of the car were manufactured and sold.

Next on the list of most expensive cars is Pagani Huaya BC that costs around $2.8 million. Though it is based on Zonda R, it has surpassed the original inspiration in terms of features like sideways-opening doors, increased power, revised brakes & chassis, and inclusion of a new 7-speed transverse gearbox. The first investor and customer of Pagani, Benny Caiola, who also happened to be a dear friend of the founder of Pagani, was the inspiration behind the name of this car. This supercar has a 6.0 liter twin-turbo V12 engines and can reach up to a speed of 261 mph with ease.

Bugatti Chiron is designed as a mid-engine supercar which costs $2.7 million and is manufactured by Bugatti Automobiles SAS. The car debuted at the Geneva Motor Show in 2016, where interested buyers were asked to deposit $200,000. Two hundred initial units were sold out even before the first delivery of the car. The speed of the vehicle is electronically limited to reach 261 mph. The highest speculated speed of the car though is a massive 281 mph.

La Ferrari FXX K costing $2.7 million is designed by architects Evan Rodriguez, Marco Fainello and Flavio Manzoni. It is based in the street-legal version of the same car, La Ferrari. K in the name refers to the kinetic energy recovery system or KERS that’s used for maximizing power. Ferrari manufactured 40 units of this car between the years 2015 and 2017, all of which are maintained by the company and made available to their owners on track days. Its highest achievable speed is 217 mph.

This hybrid sports car that costs $2.5 million was made as a 50th-anniversary celebration of the company, Mercedes Benz AMG. This limited edition car debuted in the year 2017 at the International Motor Show, Germany. Lewis Hamilton, a patron racer for Mercedes Benz AMG, helped develop this car in its making, and that gave this car’s sales a big push. Its features include a 1.6 liter turbocharged 90° V6 engine and a maximum speed of 217 mph.

Next to make it on this list with a price tag of $2.4 million is once again a Ferrari. An even amped-up version of the La Ferrari FXX K, the La Ferrari Aperta was the car launched in celebration of their 70th anniversary. The Aperta has all the features of the FXX K and many more additions. It’s a hypercar that is open-top, which makes it all the more drool-worthy! The company invited a very exclusive list of high-value customers and pre-sold this beauty to them.

Lamborghini claims that this car could change the future of super sporting cars. Priced at $2.2 million, the Sesto Elemento is a lightweight track-only racing car that made its debut at the Paris Motor Show in the year 2010. Its name is taken from the atomic number of the element carbon, because of the company’s extensive use of carbon fiber in the making of this car. It consists of a 6-speed semi-auto transmission, supported by a 5.2-liter V10 engine that allows the vehicle to reach 210 mph as its top speed.

This car that costs $1.9 million is produced by Danish Automotive. It is a limited edition car that is only manufactured five units a year. It was first displayed in 2016 at the Geneva Motor Show. It’s the successor of the ST1 which has a similar chassis and body shape, but the added features of the TS1 include upgraded interiors and a 5.8-liter twin-supercharged V8 engine.

So, this was our list of 17 most expensive cars. Even the least expensive car on the list costs a whopping $2.4 million! Imagine the kind of features that would come with each of these and the pleasure you would feel driving one. In my opinion, driving any of these cars would probably feel like gliding through clouds! Wish you could get your hands on one of them, don’t you? We do too!

Hope you loved reading the list we put together of 17 most expensive cars in the world. Which one impressed you the most?

Robo Advisors in UAE: What Are They and Which Are the Best Ones?

The Technology That Drives Live Betting