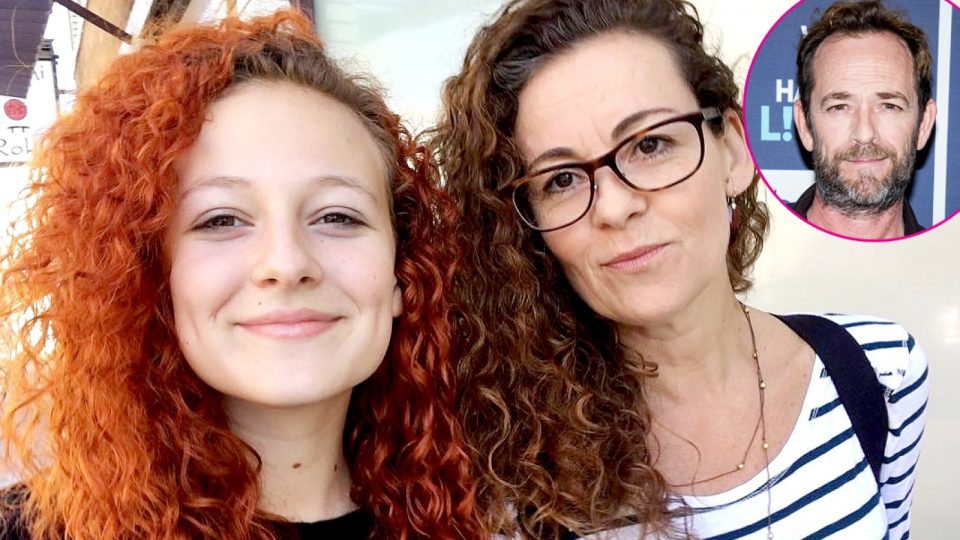 After suffering from a massive stroke, The Riverdale and Beverly Hills, 90210 actor Luke Perry, married to Minnie Sharp died in March 2019 at age 52. The couple was married from 1993 to 2003 and they have two children: Sophie Perry and Jack Perry.

1. Her daughter looks up to her:

On 27th February 2019, actor Luke Perry was hospitalized when he experienced a stroke and the paramedics were dispatched to his home in Sherman Oaks, California. A source told PEOPLE he never regained consciousness. As the world grieves the loss of Luke Perry, Sophie Perry his daughter is thanking her mother Minnie Sharp for helping the family get through the hard times.

“You all know my dad is a super star, but I just want to share for a moment that I got really f—ing lucky in the parental department because this is my mom,” Sophie, 18, began in an Instagram post on Friday. “Minnie. Who also happens to be my best friend. Wow, how cliche, I know.”

“And she is the rock for everybody grieving in this family right now. She’s the toughest and sweetest and most amazing woman I or anyone else has ever met,” she said captioned the photo of her and her mother, whose real name is Rachel Sharp.

“How did I get so lucky to have two icons for parents?” she continued. “I love you mom and I could not get through this absolute s— situation without you.

She concluded the heartfelt post with a reference to National Women’s Day: “Oh. And I was just informed it was national women’s day, how fitting for a post on my kick a– mama. #happynationalwomensday.”

2. Minnie Sharp and Luke Perry met in a restaurant:

Before becoming Luke Perry’s ex-wife Rachel “Minnie” Sharp was married to Luke Perry from 1993 to 2003. When the pair met, Minnie was a furniture saleswoman and a paralegal- a very different career path to her husband.

The couple dated for two years before they were married in 1993, The actor reportedly proposed to Minnie after he finished his film Eight Seconds to Glory, according to People. Even if the tabloids wanted you to believe something scandalous, the pair met at a restaurant through a mutual friend.

Luke Perry from 90210 married Minnie Sharp a one time furniture saleswoman, the two had dated Luke for two years before they exchanged “I dos” in a private ceremony.

The couple dated for two years before getting married in November 1993 in a private and small ceremony. The couple said their “ I do” at the Four Seasons Hotel in Beverly Hills. Their wedding was attended by 50 friends and family including 90210 co stars Jason Priestley, James Eckhouse, and Brian Austin Green, as well as Perry’s mother and stepfather, Ann and Steve Bennett. Shortly after the wedding, the pair took off for their honeymoon at an undisclosed location.

Sadly, the couple later divorced in 2003 after ten years of marriage.

Not a lot is known about Minnie Sharp but even after her divorce from Luke the pair had joint custody of their children: The couple had two children: a son called Jack, who was born in 1997, and a daughter named Sophie, born in 2000. Jack is now a professional wrestler who is signed to All Elite Wrestling and goes by the name of ‘Jungle Boy’ Nate Coy.

During the time of his death, Luke Perry was engaged to Wendy Madison Bauer, who is a marriage and family therapist in Los Angeles.

If the surname Sharp rings a bell, it is because she is the daughter of the late screenwriter Alan Sharp. Alan Sharp was the man who worked on remarkable movies like The Year Of Living Dangerously which starred Mel Gibson and Sigourney Weaver. He also worked on The Osterman Weekend, Rob Roy and the 2010 mini-series of Ben Hur.

One obituary shined a light on his life: “He never quite became a household name. He had a life and a lifestyle he enjoyed and that seemed to be enough. He had a huge talent, but sometimes seemed to lack ambition, or was reluctant to commit himself or seemed afflicted with doubt about his own abilities, dismissing his work as “pastiche”(an artistic work in a style that imitates that of another work, artist, or period).

Minnie’s sister has also dipped her feet in Hollywood. Her sister is the actress Rudi Davies who is also the daughter of Sharp and novelist Beryl Bainbridge. She used Sharp as the inspiration for the main character in the novel Sweet William (1975). Sharp was also featured in a short story written by journalist Brian Pendreigh.

4. Minnie Sharp once sent a lace bra in the post:

Minnie Sharp, according to People, was such a huge fan of Luke Perry that she first caught his attention in 1991 by sending him a lace bra in the post. We can all relate to being infatuated by an actor we see on TV, but no one is as lucky as Minnie Sharp who went on to marry her crush!

5. Minnie Sharp has acted before, but gave it up:

You can check out Minnie Sharp’s acting chops in the film Teen Wolf 2 but know that this is the only movie she has done because she decided not to pursue acting as a career, after Teen Wolf 2.

In fact, friends said that it was the fact that she had a life outside of Hollywood that made her the right fit for Perry. “She will be good for Luke,” 90210 creator Aaron Spelling told USA Today at the time. “She’s not in show business. Her head is on really straight.”

Top things to consider when getting legal Translation