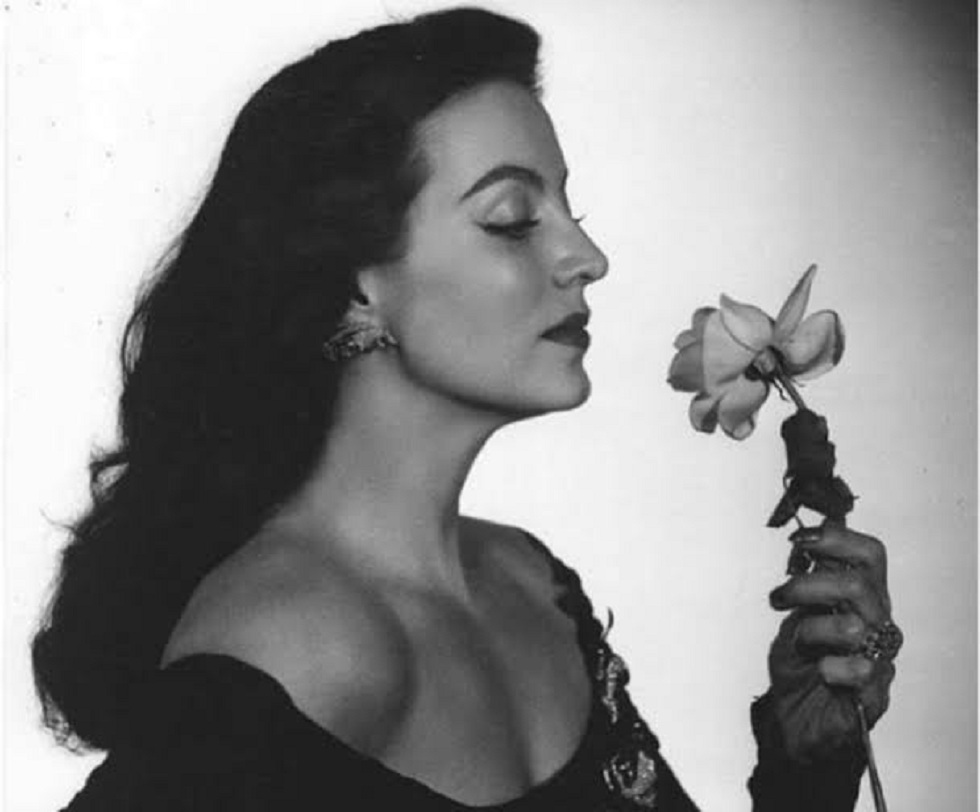 Who is Maria Felix?

Maria de los Angeles Feliz Guerena (popularly known as Maria Felix) was a legendary Mexican singer and actress. Maria Felix, along with Dolores del Rio and Pedro Armendariz was one of the most influential and successful figures of Mexican cinema during the decades of the 40s and the 50s (dubbed the Golden Age of Mexican Cinema). Maria Felix is widely considered to be one of the most beautiful Mexican actresses of all time. Maria Felix’ combination of a powerful personality and finesse helped her get the label of ‘diva’ at the start of her career. Maria Felix received the nickname of La Doña after her character in the 1943 film, Doña Barbara. Maria Felix was also called Maria Bonita because of famed Mexican music composer Agustin Lara’s (her second husband) song dedicated to her during their wedding.

Maria Felix acted in 47 movies over her illustrious career and her movies were made in countries such as Mexico, Argentina, Spain, France and Italy.

Where was Maria Felix born?

Maria de los Angeles Feliz Guerena or Maria Felix was born on April 8th, 1914 in Alamos, Sonora, Mexico. Oddly enough, Maria Felix’ birth was only registered almost a month later and as a result, her date of birth was misinterpreted as May 4th for a long time. Maria Felix’ father’s name was Bernardo Felix Flores and he was a military officer. Maria Felix’ mother’s name was Josefina Guerena Rosas, and she was a housewife. Maria Felix’ parents had a very fertile married life and they had many children. Some of Maria Felix’ siblings were Pablo, Bernardo, Josefina, Maria de la Paz, Miguel, Maria de las Mercedes, Victoria Eugenia, Ricardo, Fernando, Ana Maria del Sacramento and Benjamin.

Maria Felix’ childhood was chiefly spent in Alamos. Among her numerous siblings, Maria Felix was most closely attached to her brother Pablo. Pablo and Maria Felix’ bond with each other was so tight that their mother suspected that they both had developed an incestuous relationship. As a result of her doubt, Maria Felix’ mother separated Pablo from his beloved sister and sent him to Mexico City’s Colegio Militar (Military College).

What is Maria Felix famous for?

Maria Felix had an illustrious movie career which spanned over 47 movies in different countries. She was also hailed as the most beautiful face in Mexican cinema. Maria Felix’ start in the movie industry happened while she was walking down the streets of Mexico City. Maria Felix was approached by director and filmmaker Fernando Palacios and he asked her if she had any interest in making movies with him. Maria Felix famously replied “When I want to, it will be through the big door.”

However, a persistent Palacios eventually convinced Maria Felix to start working with him. Palacios started training Maria Felix so that he can present her in film circles. Maria Felix’ first major public appearance was in Mexico City Country Club’s “White and Black Ballroom”. The event was attended by some of Mexico’s biggest movie stars, Andrea Palma, Lupe Velez and Esther Fernandez. Maria Felix’ popularity grew and talks about her striking good looks reached Hollywood as well. Maria Felix travelled to the Metro-Goldwyn-Mayer (MGM) studio to meet Cecil B. DeMille. Maria Felix was offered a chance to launch a career in Hollywood but she declined as she wanted to focus on building a career in Mexican cinema. Maria Felix’ relationship with Fernando Palacios eventually helped her land her first ever leading role in Grovas Productions’ El Penon de las Animas, a movie directed by Miguel Zacarias.

Things didn’t go off to a smooth start for Maria Felix as she ended up clashing with Jorge Negrete, the actor cast to play the role opposite her in the movie. Negrete had wanted his girlfriend Gloria Marin to be cast instead of Maria Felix and that resulted in a sour relationship between the co-stars. However, Maria Felix stood her ground and earned the reputation of a tough and arrogant woman as a result.

In 1943, Maria Felix was cast in the movie Doña Bárbara which earned her the famous nickname of La Doña. Maria Felix also went on to collaborate with famous Mexican filmmaker Fernando de Fuentes. They worked on two films together, 1944’s La Mujer sin Alma and 1946′ La Devoradora. According to Mari Felix: “With these films, I became the number one enemy of the Mexican family morals. Somehow, I seduced the public, even those who criticize the conduct of my characters in the films. My legend began to take shape without moving a finger. The public imagination did everything for me.”

After performing in numerous films in France, Spain, Italy and Argentina, Maria Felix returned to Mexico in 1955 and performed in various movies inspired by the Mexican Revolution. As time went by, her once fabled beauty started eroding and the movie roles started drying up quickly as well. Maria Felix’ last movie was 1970’s La Generala and she finished her professional acting career with 1971’s telenovela, La Constitucion.

Who did Maria Felix marry?

Maria Felix was married for a total of four times in her life. Her first two marriages, with Enrique Alvarez and Agustin Lara, ended in divorce. Her other two marriages, with Jorge Negrete and Alex Berger ended as a result of her husbands’ deaths. She was also in a relationship with Antoine Tzapoff around the time of her death.

When did Maria Felix die?

After leaving an indelible mark in Latin American cinema, Maria Felix passed away in her sleep on April 8th, 2002. That day also happened to be her 88th birthday. Maria Felix’ remains were buried in her family’s tomb inside Mexico City’s Panteon Frances.

On April 8th, 2018, on the occasion of Maria Felix’ 104th birthday, Google released a doodle to commemorate her life and career. Here’s what the Google Doodle blog said:

“When an important Mexican filmmaker first approached Maria Félix about an acting career, she responded: “When I want to, it will be through the big door.” Félix would launch a film career on her terms, even turning down Hollywood magnate Cecil B. Demille to debut in her home country where she would become an icon of the Golden Age of Mexican cinema.

Born in 1914, Maria Félix grew up modestly in Álamos, Sonora, Mexico among 11 siblings. During her teen years, her family moved to Guadalajara where Félix was crowned Beauty Queen at the University of Guadalajara. She got her break after moving to Mexico City, starring in El Peñón de las Ánimas (1942). Her offscreen defiance of famous co-star Jorge Negrete earned her the reputation for toughness that followed her throughout her life and career.

Maria Félix’s contributions to international culture are prolific. In addition to releasing 47 films in Mexico, Spain, France, Italy, and Argentina, she was considered a muse by famous artists like José Clemente Orozco and Diego Rivera, novelists and playwrights like Jean Cocteau, Renato Leduc, and Carlos Fuentes, and musicians like Juan Gabriel and Francis Cabrel. She was also a fashion icon, wearing clothes and jewelry designed expressly for her by famous designers like Christian Dior and Cartier Paris.

How to Write Great Wedding Messages?

Crossing the AI Chasm in AML/CFT