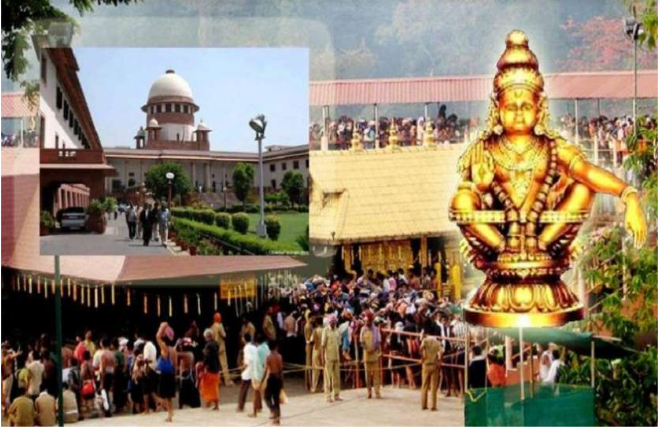 In ancient times, Lord Ayyappa of the Mandir set a girl free from a curse in which she had to live as a demon. The girl wanted to marry Lord Ayyappa after she was set free by the Lord himself. The girl is said to be waiting till now beside the Sabarimala Mandir!

Swami Ayyappa is the deity who presides in the Sabarimala Mandir which lays between hilly mountains of Kerala’s Pathanamhitta district which is surrounded by Periyar Tiger reserve. Recently, the Supreme Court have struck down 3(b) rules in which women were forbidden to enter the temple under worshipping Authorisation Entry Standards. It declared that all women between age 10 to 50 i.e. the ones who are in their menstruating age would not be allowed to enter the Mandir premises. However, there is another story attached to the version why menstruating women were not allowed to enter the Sabarimala Mandir doors.

According to ancient puranas, Swami Ayyappa was born due to the union of Lord Vishnu and Lord Shiva where the former one changed his avatar to a woman form (Mohini Avtar). Vishnu took this form to destroy a dangerous demon Bashmasur to gain Amrit (a sacred holy water) for the Gods while the ocean was churned to obtain it. Lord Siva got swayed with Mohini look and Swami Ayyappa was born out of their union.
When Ayyappa was a child, a lady demon created havoc in the southern regions as she was told by the Gods that she will be defeated only by the child born out of the union made by Lord Shiva and Vishnu. And so, things happened and the lady-demon was defeated in a battle by Swami Ayyappa. After defeating the lady, Ayyappa found that she was actually a beautiful girl who was cursed to live a demon like life and the defeat was set to free her who in turn proposed Ayyappa for marrying her. However, the Swami refused saying that he had been originated to forests and look after his devotees. But the lady remained determined for which the Lord promised her that the day when devotees will stop coming to pray at Sabarimala, he will marry her.
The lady agreed and decided to stay in the nearby temple and is presently worshipped as Malikapurathamma in neighbouring Mandir. Since then, no menstruating women is allowed to come near Swami Ayyappa and even the women choose not to visit the temple as Malikapurathamma may then feel insulted for her love and sacrifice made.

Sabarimala Mandir is one of the most popular temples that was built more than a thousand years ago. For almost three centuries from the day it was built, this temple remained unreachable by common mases. In 12th century, during the reign of Pandalam Dynasty, a prince named Manikandan rediscovered this temple by discovering an original path that led to the Sabarimala Mandir gates. He was followed by many other people including descendants of Vavar family who were Muslim warriors defeated by Manikandan. It is believed that the Prince himself was an Avatar of Lord Aayyappa and due to his meditation at Sabarimala, the temple was found and thus he also become a divine entity.

Sabarimala pilgrims have to reach Mandir after making a difficult journey through the forest regions where vehicles cannot reach. It takes around 41 days where they have to observe celibacy in which devotees have to follow strict rules of lacto-vegetarian diet along with refraining from alcohols. They are even not allowed to trim their nails or hair during that period and are expected to bath twice before entering any local temple on regular basis. The devotees must wear blue or black clothes and must not shave until the pilgrimage is completed along with getting smeared with sandal paste in their forehead.

Sabarimala Mandir is one of those temples which has always remained under controversies just like Ram Mandir in Ayodhya. This Mandir banned entrance of women centuries ago as the devotees believed that Lord Ayyappa, the presiding Lord of the temple would not like nearness to women. High court of Kerala also passed a bill in 1991 which stated that no women between the age 10 to 50 shall enter the Sabarimala Mandir premises.
After 27 years of protest, the Supreme Court lifted the ban on 28th September 2018 and said that discrimination against women shall not be entertained under any grounds even if it is based on religion. However, the temple’s head priest Kandaru Rajeevaru remained “disappointed” but could not help and accept Supreme Court offer. After the release of court’s statement, many devotees of the Mandir including women blocked the national and state highways in many parts of Kerala state.
This protest took a political turn when Shiv Sena, the BJP ally warned mass suicides and said that if women will be seen in the Mandir premises, they will be killed instantly. As the opening dates came nearby, the protestants got intensified and when the doors finally opened on 17th of October, many protestants trekked towards the Mandir to stop women entering the Mandir gates and created a mass havoc.

Things to be considered before opening a beauty salon

Be One Step Ahead Of Stress – Part 1