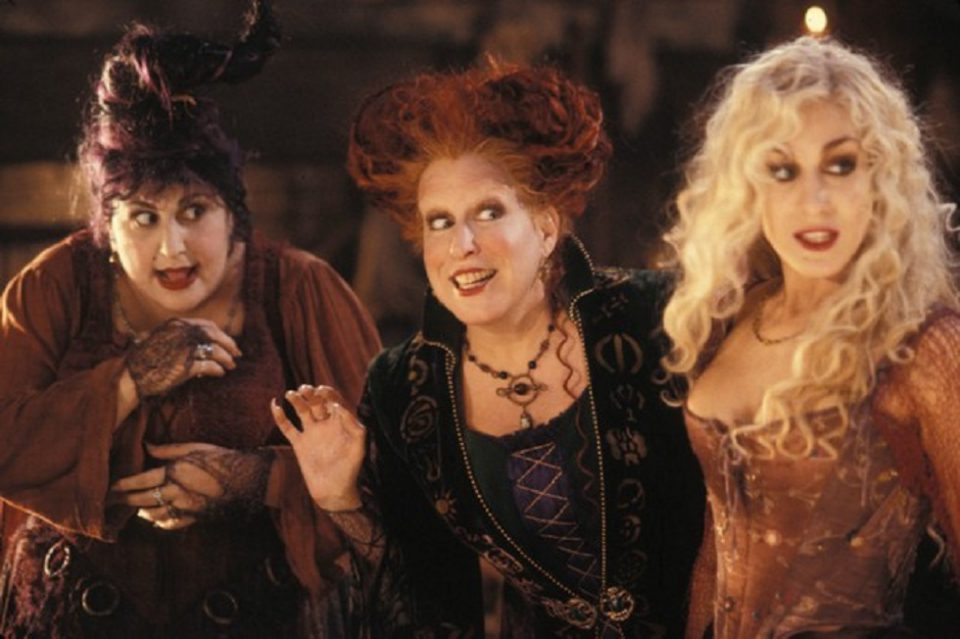 Earlier this year in October 2020, Bette Midler — who starred alongside Sarah Jessica Parker and Kathy Najimy as a trio of witches – resurrected her role with a big announcement! In an interview with FOX 5, Midler,  Parker, and Najimy come together in agreement to star in the highly anticipated Hocus Pocus 2!

Its predecessor or sequel (Hocus Pocus) has developed a rabid fan base since its release in 1993, becoming one of Halloween’s most beloved child-friendly cult classics! No one else could do justice as a trio of hilariously wicked witches other than Bette Midler, Sarah Jessica Parker and Kathy Najimy. No wonder why this film has become such a Halloween staple!

Here are 10 things you need to know about Hocus Pocus 2:

Hocus Pocus 2: What To Know Before Watching!

Hocus Pocus/ Hocus Pocus 2 will not stream on Netflix, Prime, Or Hulu.

“Hocus Pocus 2 will come to Disney+ along with other films in the works such as “Sister Act 3” and a sequel to “Enchanted,” entitled, “Disenchanted.”

The sequel, set to be directed by Adam Shankman, will be coming to Disney+.

Although reports had previously declared the film was in pre-production, this marks the first time Disney officials unleashed a tease of the movie.

Sean Bailey, President of Walt Disney Studios Motion Picture Production, delivered the teaser below during a company presentation to investors:

3. Adam Shankman has been contracted to direct:

Adam Shankman (known for his movies such as Hairspray, A Walk to Remember) will be directing, switching positions with the original director Kenny Ortega who directed the 1993 original.

Adam is a big asset to Disney as he is also attached to produce Disenchanted, the planned sequel to Disney’s Enchanted.

When it comes to the writing, Jen D’Angelo is responsible for the script, taking over from Mick Garris and Neil Cuthbert, who wrote the script for the original.

Bette Midler has just confirmed that Midler, Sarah Jessica Parker, and Kathy Najimy will all be returning for the Hocus Pocus sequel as the sister-witches Winnie, Sarah, and Mary.

Midler had previously expressed her desire to be involved in the sequel, told Entertainment Tonight in October 2020 that she would “absolutely” be up for reprising her iconic role as Winifred Sanderson in the follow-up film, adding, “I can’t wait to fly!”

And then, while chatting with PEOPLE around the same time, Midler stated, “They presented us with an outline, and after we picked ourselves up off the floor, because it’s been 27 years, we looked at it and I think all of us agreed that it was pretty great.”

And while the main stars have agreed to reprise their roles for the sequel, Midler said she was also eager to reunite with the creative team behind the original in order to make the follow-up as special as the first film.

“We’re trying to see who’s available and who’s still out there and still working and who can come back,” Midler said. “Because, a lot of the success of what we did on that picture had to do with the team that was surrounded.”

While no official release date has been announced for Hocus Pocus 2, there is a good reason for it. The global pandemic is a major risk to the production team and 74-year-old stars like Midler.

Many therefore are assuming that Disney is eying Halloween 2021 as a planned release date.

“It was so bizarre to have been these characters 27 years ago,” said Midler of the mini-reunion. “And to put all that gear on…it was so bizarre because we fell into exactly the same relationship we had and the same style of behaving on screen that we had 27 years ago. As if we had been off for a weekend!”

7. Hocus Pocus bombed at the box office during its first release:

Can you imagine this Halloween classic failed? Nonetheless, it became a Halloween favorite among families over the years thanks to countless re-airings on television. Just in 2020, it played a whopping 14 times during Freeform’s annual “31 Nights of Halloween.”

When it comes to the chemistry of the Sanderson sisters, Midler said the three regularly keep in touch. “We do see each other,” she told PEOPLE. “We’ve been in touch for years.

“Kathy is a very strong feminist presence in the city, and so whenever she needs someone to show her up or to do a video or to testify or do anything like that, she always calls us,” she noted. “I’ve known Sarah for many, many years, and we have so many of the same friends in common that we do go to dinners and we’ve been to each other’s houses and all that sort of thing.”

Midler added: “So we know each other. It’s New York, everybody knows everybody.”

The film has become a staple of Freeform’s network annual 31 Nights of Halloween in which it airs numerous times throughout the month of October.

Fun fact: The network broadcast the movie 14 times this year!

So if you want to give your friends and family a recap before Hocus Pocus 2 arrives next year, you can watch on the Freeform (check your local listings) next year!

How to Choose Bar Stools

Nancy Grace: 8 Facts About The Commentator We Know To Be 100% True!

The Prevalence of Block Printing in Global Markets