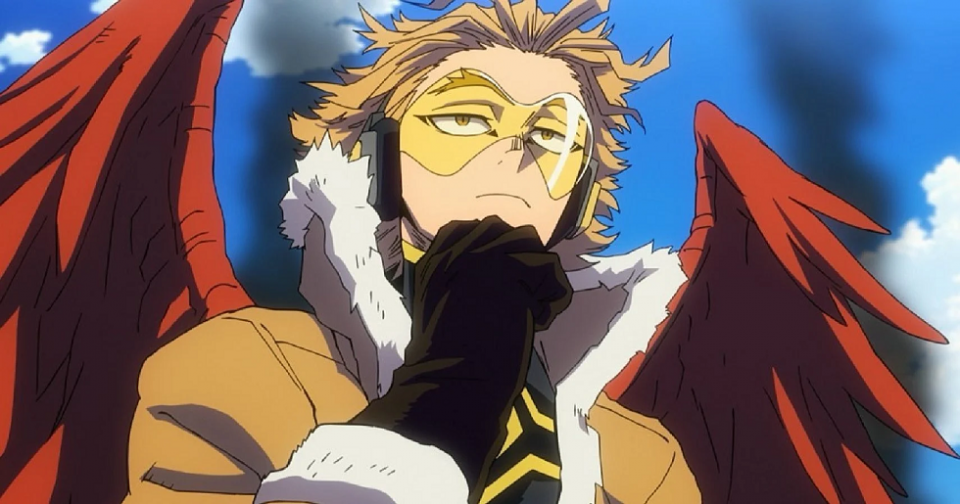 Hawks BNHA or Keigo Takami, who is publicly known as the Wing Hero: Hawks, is one of the major characters of the wildly popular 2014 superhero manga and anime series My Hero Academia. In the Pro Hero Arc, he was the arc deuteragonist. Hawks BNHA also made an appearance in the movie My Hero Academia: Heroes Rising. Let’s find out more about him.

Hawks BNHA: All You Need to Know

Who is Hawks BNHA?

Hawks BNHA or Keigo Takami is Japan’s No. 2 Pro Hero despite his young age. At the age of 18, Keigo opened his own Hero Agency and ranked among the top 10 Pro Heroes of Japan within the year, becoming the youngest hero to do so. His quirk called Fierce Wings bestows Hawks with a set of red feathery wings on his back.

You May Like: The Best 4Anime Alternatives for You

What is Hawks BNHA’s appearance?

Hawks is a young man of average height, having blonde hair swept backwards along with a pair of gold-brown eyes that appear to resemble that of a bird, along with some stubble underneath his chin. His Quirk gives him a pair of large, bright red wings with feathers that lengthen as they proceed downwards.

Hawks’ hero costume resembles that of an aviator’s uniform, it is yellow in colour and lined with white fur. He wears a black top underneath which has a golden pattern, along with a yellow-tinted visor to protect his eyes, as well as black gloves and boots. He is also seen wearing headphones that likely serve to protect his ears from the high velocities he flies at.

What’s the personality of Hawks BNHA?

Hawks is usually characterised by his seemingly chilled, easy-going and relaxed demeanour, as shown by him speaking his mind during the Hero Billboard Chart JP, and casually calming an angered Endeavor who viewed his attitude as disrespectful. Despite seeming laid-back however, Hawks is actually on high alert, using his Quirk to casually stop a criminal, save a dog from getting run over, as well as help an old lady with her bag. Hawks has also shown to interact kindly with his fans, as seen when a bunch of them congratulated him for making the number 2 spot. He is also friendly with Endeavor, despite the latter’s crude attitude and high temper, congratulating him over becoming the Number 1 Hero and wanting to help him. It is eventually revealed that he has been a fan of Endeavor since he was young.

You May Like: Mangastream in 2021: Best Alternatives to the Manga Reading Site

While open about his opinions, Hawks does show to have a good heart, he wishes for his fellow heroes to have a relaxed routine where they can take it easy once in a while and have time to spare. Despite appearing carefree and relaxed, he is in fact very stressed and hard-working over his hero duties, following the HSPC’s orders dutifully. He admitted to Fumikage Tokoyami that he took the latter on only to learn more about the League of Villains (as well as the fact that they were both birds), but later decided to inspire the young hero in training and giving him some words of wisdom. He also held guilt over Endeavor gaining a scar after the Nomu attack, with him containing the High-End so casualties could be kept at a minimum.

Hawks also shows to be highly intelligent, having been trained by the HSPC at a young age and mastering the skills of espionage and infiltration. He has full control over his facial expressions and way of speech, making him an expert liar, although he admits that he doesn’t like lying claiming it to be too much work. These traits allowed him to successfully work his way into the Liberation Army, and fool the villains into thinking he was on their side. In essence, Hawks is a prodigy having started his own Hero Agency at the young age of 18 and reaching the Top Ten Hero Rankings in the second half of that same year, being the youngest hero to do so.

Despite his laid-back and friendly attitude however, a darker side of Hawks personality is shown during his infiltration of the Liberation Army. While still on the good side, his conscience flashes through with his disgust towards Dabi following the attacks, leading to him to threaten the villain with one of his feather blades. He later shows that, despite being a hero and a good person at heart, that this darker side also has the capacity to kill.

While Hawks maintained a friendship and earned the trust of the villain, Twice, he did feel guilty about lying to him and eventually having to betray his trust. He soon finds Twice to be a good individual despite the latter being a villain, and thus wanted to redeem Twice and help him get back on his feet. After realising that Twice wouldn’t come quietly however, as well as seeing that he wouldn’t turn on the League, Hawks reluctantly killed the villain in acknowledging that he was too dangerous to keep alive.

What are some of the powers of Hawks BNHA?

Hawks’ Quirk grants him a set of broad red wings which grants him the ability to fly at extreme speeds. Aside from flight, Hawks can also telekinetically control each and every one of his feathers, he can launch them from his wings to serve a multitude of purposes, whether it be attacking villains or saving civilians. His feathers are both light yet sturdy, and Hawks can take his lengthier feathers and use them as blades. On top of all this, Hawks can also use his feathers to detect sounds and vibrations around them, allowing him to locate people and pick up on chatter and conversations.

The more feathers that Hawks uses, the more his flying abilities are impaired. Furthermore, his feathers are vulnerable to being burned and/or destroyed, making Hawks weak against enemies with fire abilities. If all his feathers are destroyed then his main wings will regrow them in two days.

Hawks BNHA is a very powerful Pro Hero. He is a master of using his Fierce Wings Quirk. Even though he lacks brute power, he is a great supporting character who does very well when he teams up with more powerful heroes like Endeavor. He is a critical asset for the heroes because of his high intelligence and skill.

How to Remove MSM from Ice with Water