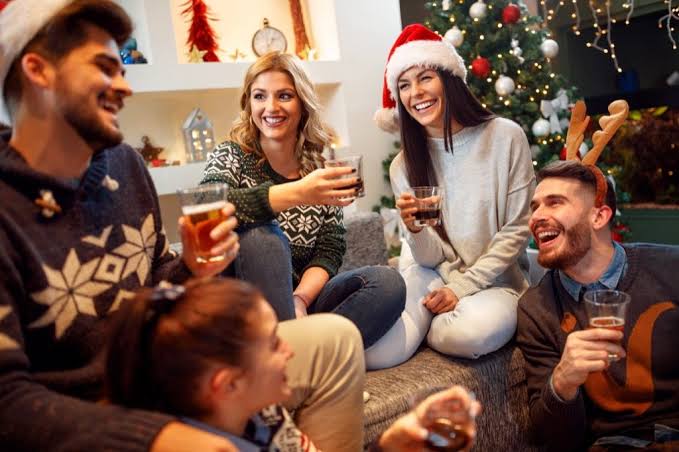 Remember your childhood when parties used to be so much fun even when you DIDN’T drink any alcohol? The biggest reason behind that was the fun games you used to play. Don’t worry, no one is asking you to drop your bottle for good and only have sober fun. However, how many times can you get drunk and play beer pong? Adult game nights can be just as much fun as game nights during childhood. The games can range from board games, to party games, to outdoor games, depending on the kind of evening you have planned for your friends. These games will also help you shed your inhibitions and make you forget if you are looking silly or not. Whether it’s your 25th birthday or the 50th, you can have LOTS of fun with these. And hey, there is no rule against playing these games while you are drunk.

The title of the game is self-explanatory. Play a song, name that song, win points. Since most human beings on this planet love music, this can be a really fun and engrossing game for everyone. You can even have genre based nights to make it more exciting. Make people recognise gorgeous synthpop on 80s nights or turn up the volume for a night of heavy metal thunder.

A cell phone with wifi connectivity and a nice set of speakers are all you need. Make your playlist on Spotify/Amazon Prime Music/YouTube according to your musical theme.

Split your guests into two teams and play the track. One point is awarded for correctly guessing the name of the song, another point is awarded for guessing the name of the artist. The points can be split among the teams if one of them guesses the song and one guesses the artist. The team with the most number of points at the end of the playlist wins.

In this game, the players need to choose what doesn’t belong in a given set of items. Get it right, you move on in the game, get it wrong, you’re out.

A wooden spoon, a list of items within different categories, ensuring that one of the items doesn’t belong with the rest. For example, a set like (Basketball, Football, Baseball, Catfish). Catfish is a fish and the rest are sports, hence it doesn’t belong in the list. Create as many lists as you can. You can even make very specific lists like ‘Steven Spielberg Movies’ and ‘Alan Moore Books’ if your friend circle is into that.

Split everyone into two groups and place a wooden spoon between the two teams. Once you read the name of the items from a given list, the team which grabs the wooden spoon first, gets to answer. A wrong answer sends the player to a designated area for ejected players. A correct answer will give the player the option to kick someone out from the opposite team, go back to their original spot and continue playing. In case no one guesses correctly, pick up another list and start from scratch. Continue playing until there is just one player remaining and just like Dodgeball, the team with the last player standing is the winner.

As far as adult party games go, this is one of the most dynamic and exciting games out there. It can vary completely based on which celebrity people choose to write down. The aim of the game is to guess the celebrity by using words to describe them or acting their idiosyncrasies out.

Hand over the 10 pieces of paper to all the players and ask them to write the names of 10 celebrities they can think of. The celebrities should ideally be people everyone knows, Kim Kardashian and Donald Trump type.

Split the players into groups of two. This game can be extra fun in a girls vs guys mode. Once that’s done, choose which team goes first based on a coin toss. Once that’s chosen, set the timer to 2 minutes and ask a player from the first team to pick a piece of paper with a celebrity’s name on it. Once they have seen the name, start the countdown timer and the players have to do the things required as per the round rules to make their team guess the celebrity’s name correctly. If the team guesses it correctly, the next player goes up and picks another name and repeats what the previous player did. This goes on until the timer runs out and then the other team takes its turn. This goes on until the bowl runs out of names and the game moves to the next round. The team with the most number of correctly guessed celebrities after three rounds is the winner. Here are the rules for each round:

Round 1: The celebrity can be described using any number of words except the celebrity’s name. Players are only allowed to speak words and any kind of acting will lead to an automatic disqualification from the round.

Round 2: Players can not use any words and need to act the celebrity out. They can choose to enact some famous activities or moments associated with the celebrity. However, speaking any word will lead to an automatic disqualification from the round

How To Make Yourself Throw Up

5 Most Popular Beaches in Goa : Must-visit on a 2-day trip itinerary