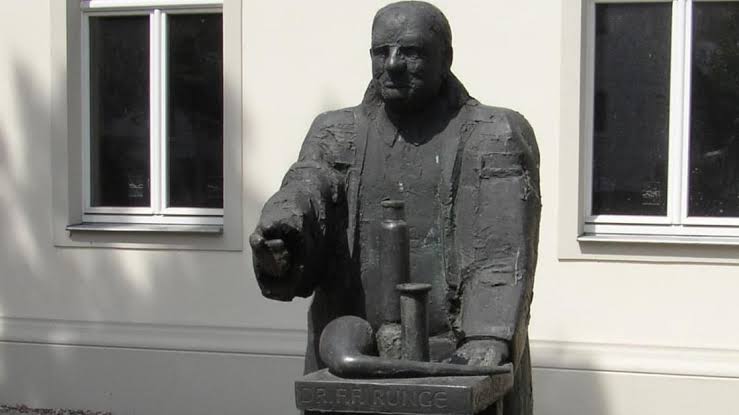 Who is Friedlieb Ferdinand Runge?

Where was Friedlieb Ferdinand Runge born?

What did Friedlieb Ferdinand Runge do?

Friedlieb Ferdinand Runge worked in his uncle’s pharmacy as an apprentice. Friedlieb Ferdinand Runge’s discovery of the pupil dilating effects of the belladonna plant extract was more a result of serendipity than one of a meticulously planned scientific endeavour. One day, while working at his uncle’s pharmacy, a drop of henbane juice fell into Friedlieb Ferdinand Runge’s eye. He immediately noticed a dilation in his pupil. To arrive at a conclusion, Friedlieb Ferdinand Runge conducted some experiments using the henbane extract on a cat’s eyes. He concluded that the element atropine, present in henbane and the belladonna plant (deadly nightshade) causes dilation of pupils and went on to write about the toxic effects of atropine in a dissertation. Atropine works on the nervous system by blocking acetylcholine’s (a neurotransmitter) receptors. That neurotransmitter is responsible for the activation of muscles by the nervous system.

Friedlieb Ferdinand Runge enrolled himself at the University of Jena in Germany to study chemistry. Friedlieb Ferdinand Runge’s classmates used to refer to him as Dr. Gift which when translated from German, means Dr. Poison. The nickname was bestowed upon him because of his unrelenting enthusiasm towards working with deadly nightshade/belladonna (a poisonous plant). He chiefly studied under J.W. Döbereiner, who was also an advisor to Johann Wolfgang von Goethe.

In the year 1819, Friedlieb Ferdinand Runge was invited to meet legendary German writer and statesman Johann Wolfgang von Goethe, and show him the dilation of the pupil caused by the belladonna plant extract. To conduct the experiment and display the results to Johann Wolfgang von Goethe, Friedlieb Ferdinand Runge used a cat as his test subject. Upon a successful demonstration of the experiment, Goethe was highly impressed by Friedlieb Ferdinand Runge, who described his interaction with Johan Wolfgang von Goethe after the successful demonstration. At a later point of time in his life, Friedlieb Ferdinand Runge said: “Goethe had expressed to me his greatest satisfaction regarding the account of the man whom I’d rescued [from serving in Napoleon’s army] by apparent “black star” [i.e., amaurosis, blindness] as well as the other, he handed me a carton of coffee beans, which a Greek had sent him as a delicacy. “You can also use these in your investigations,” said Goethe. He was right; for soon thereafter I discovered therein caffeine, which became so famous on account of its high nitrogen content.”

Another remarkable Friedlieb Ferdinand Runge discovery for which he rarely receives credit, is the isolation of quinine from the bark of the cinchona tree. Quinine was the first effective medication in the fight against malaria and has saved millions of lives over the years. However, the credit for that discovery is usually given to Joseph Bienaime Caventou and Pierre Joseph Pelletier. Those chemists reported their work a year after Friedlieb Ferdinand Runge had already done it.

Friedlieb Ferdinand Runge was also the first person to observe the phenomenon of the Liesegang rings. He observed them while he was conducting experiments dealing with reagent precipitation on blotting paper.

After obtaining his doctorate, Friedlieb Ferdinand Runge toured around Europe for three years. After that phase of his life, he taught chemistry at the University of Breslau in modern day Poland till 1831. Between 1831 and 1852, Friedlieb Ferdinand Runge worked in a chemicals manufacturing company until he was fired from it by a resentful manager.

How did Friedlieb Ferdinand Runge die?

After being fired from his job, Friedlieb Ferdinand Runge’s life fell into disarray and he was forced to eventually live in poverty. On March 25th, 1867, fifteen years after being fired, the legendary chemist Friedlieb Ferdinand Runge passed away in abject poverty in the German town of Oranienburg. He is buried in that town and there is a statue and plaque commemorating his life as well.

On February 8th, 2019, on the occasion of Friedlieb Ferdinand Runge’s 225th birthday, Google released a doodle to commemorate his life and contributions to science (and the mornings of a majority of the world’s population). Here’s what it said on the Google Doodle blog:

“Today’s Doodle celebrates Friedlieb Ferdinand Runge, a German analytical chemist whose place in history resulted in large part from an accident followed by a chance encounter.

Runge was born outside of Hamburg on this day in 1795. The son of a Lutheran pastor, he expressed interest in chemistry from an early age and began conducting experiments as a teenager.

During one such experiment, Runge accidentally splashed a drop of belladonna extract in his eye, taking note of its pupil-dilating effects. Ten years later, while studying under renowned chemist and inventor Johann Wolfgang Döbereiner at the University of Jena, Runge was asked to reproduce belladonna’s effects as part of a demonstration for one of Döbereiner’s friends: the writer and polymath Johann Wolfgang von Goethe. Impressed by the 25-year-old chemist, Goethe handed Runge a bag of rare coffee beans and suggested he analyze their chemical makeup. Shortly thereafter, Runge isolated the active ingredient we know today as caffeine!

After earning his doctorate from the University of Berlin, Runge went on to teach at the University of Breslau until 1831 when he left academia to take a position at a chemical company. During this time, he invented the first coal tar dye and a related process for dyeing clothes. His contributions to the world also include: being one of the first scientists to isolate quinine (a drug used to treat malaria), being considered an originator of paper chromatography (an early technique for separating chemical substances), and even devising a method for extracting sugar from beet juice.

Here’s to Runge, without whom the pain of forgoing one’s morning cup of coffee might never have had a scientific explanation!”

Top 10 Cities With Most Beautiful Women in India