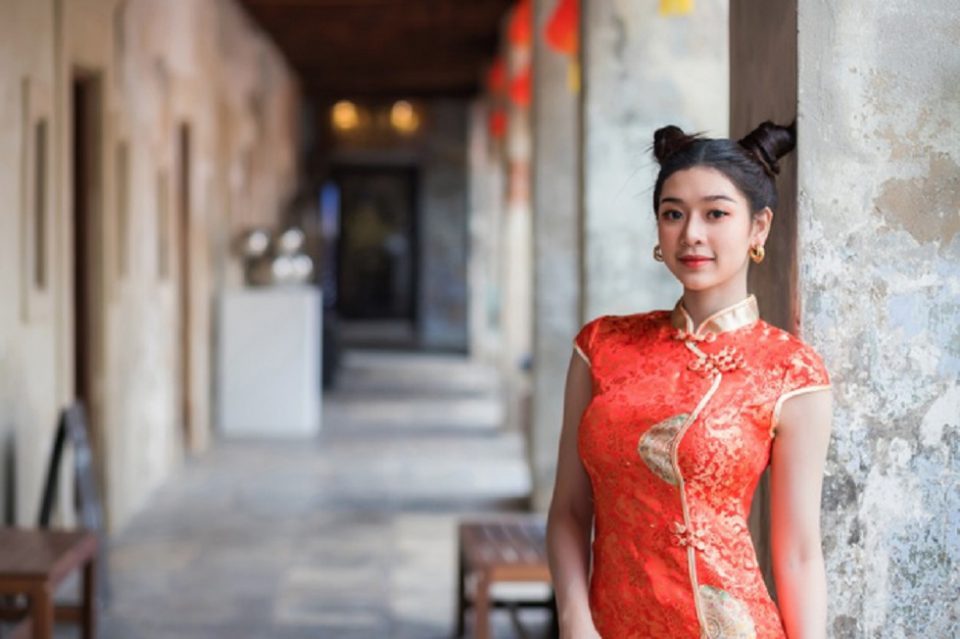 In this article, we take a look at the Cheongsam through the lens of the past in terms of feminism along with evolution and the present in terms of cultural significance and power.

The cheongsam first became popular in late 1920s Shanghai, which was then an influential fashion capital. Chinese calendar posters in Shanghai that featured beautiful women dressed in cheongsams also helped to boost the popularity of the dress.

Cheongsam is also known as qipao in Mandarin:

Both mean a long robe or dress fitted with buttons and made of silk. It is also known as the female version of men’s one-piece gown known as the changshan (long shirt) or changpao (long robe).

What made the cheongsam stand out was the representation of the Chinese identity through the collar and the buttons, and despite it having had many variations throughout history, the top part of the cheongsam (the collar and button design) hasn’t changed much because it preserved the cultural identity of the garment.

The cheongsam spread from Shanghai to places with large Chinese communities such as Hong Kong and Taiwan. It made a particularly big splash in Singapore for wealthy Chinese women who loved the cheongsam fashion trend.

Luckily Cheongsam was called its original name when Hollywood came calling. Based on a best-selling book, Dragon Seed leading lady, Katherine Hepburn, donned “yellowface” and slit eyes to portray a Chinese woman in a Chinese village during WW2. She portrayed a Chinese woman through a costume that she wore, one of which was a very early variation of the cheongsam.

From the 1930s onwards, even Peranakan (mixed Chinese and Malay/Indonesian heritage) women began to wear the cheongsam rather than the “nonya kebaya” (see image above) for formal occasions and family portraits.

The “long dress” in Cantonese, is a dress style typically worn by Chinese women.

Cheongsam  means “long dress” in Cantonese in the physical sense but culturally it was very different.

It meant the emergence of feminism in China in the early 1900s:

The cheongsam has its roots in globalization and was at the height of its popularity between the late 1920s and 1960s, when it was the standard dress for many urban Chinese women.

It also meant a lady was educated:

Chinese women got jobs as teachers and in white-collar occupations and began wearing cheongsams, which were mostly of simpler designs. During this period, the cheongsam also became the outfit of choice for Chinese female students when taking graduation photographs.

Students wore the dress to show off their education status, modernity and association with the Chinese female elite in other countries. The easy availability of good quality cheongsams from the many Cantonese and Shanghainese tailors, or from tailor shops in the neighbourhood, also added to the popularity of the dress.

The shape of the cheongsam underwent changes with the changing role and status of women in society:

With political, economic and social changes occurring rapidly in post-war Singapore, more women found themselves working outside the home. Many of these working women adopted the cheongsam as their work attire and adapted it to project the modern and progressive values that they subscribed to.

The cheongsam’s hemline thus became higher, often ending at mid-calf length, and the high stiff collar was shortened. In addition, zips and press studs replaced the traditional Chinese knotted buttons. Influenced by the nipped-in waists of Western dress, the cheongsam became more figure hugging. The side slits also grew higher to show off the wearer’s legs and figure.

During the 70s, it was too old school:

From the 1970s onwards, the popularity of the traditional cheongsam began to decline. The Chinese youth became increasingly attached to the affordable, mass-produced Western clothes and saw the cheongsam as impractical and old-fashioned.

In the 90s it was a statement dress for women in power and for people in the fashion industry:

The cheongsam made a comeback in the 1990s as it was regarded during this period as a symbol of Chinese culture, which in turn was seen as part of the ‘Asian values’.

The cheongsam also came into the public eye for becoming an inspiration for Western and Chinese fashion designers. The statement dress began to appear regularly on fashion runways abroad while the appearance of cheongsams in popular Chinese films such as Center Stage (1992) and In the Mood for Love (2000) increased the visibility of this traditional dress.

After the collapse of the Qing Dynasty, China’s closed society opened its door to the world and began to experience fast-paced globalization and modernization. As a result, women had more freedom, and began to wear men’s long robes (known as qipao, which during the Qing Dynasty was worn by the Manchu noblemen) as a feminist statement.

After this, it developed into a well-fitted dress that incorporated the Western style silhouette while preserving the traditional Chinese style of collar, buttons and hem, as well as the silk used to make the dresses. That is the difference when it comes to Cheongsam vs qipao. Essentially, the qipao was worn by noblemen in the past but it couldn’t be called the same as it was fitted for women even though the length remained the same.

However, according to Singapore Infopedia, the qipao was instead worn by Manchu women rather than men during the Qing dynasty (1644–1911) in China. The long gown was cut in a single piece that hung straight down to the ankles. There was a slit on either side of the gown but other garments worn underneath prevented the legs from showing.

Before the cheongsam, Chinese women generally wore two-piece outfits consisting of tops paired with either skirts or pants (see image). The cheongsam was not immediately popular due to its resemblance to the men’s one-piece gown.

The earliest cheongsams were loosely fitted and had a low hemline that reached the ankles. A group of female students in Shanghai became one of the first women to wear the cheongsam when they started donning the outfit in 1912. In a bid for gender equality, these students wore the cheongsam as a modification of the men’s long robe. The students’ version of the cheongsam was made of cotton, plain in design and loose-fitting with bell sleeves. This experimental style of dress piqued the interest of other women and it soon became a trendy outfit.

The modern cheongsam is a contemporary version that comes in a variety of styles, shapes and materials. These include:

Despite these fashion updates, the modern cheongsam generally keeps its iconic look by retaining distinguishing features such as the mandarin collar, asymmetrical opening and side slits. These modern cheongsams are most often worn during special and festive occasions such as wedding dinners and Chinese New Year.

School or Graduation Over? What’s Next!

Investing in bitcoin? Wait and choose a reliable type of wallet first!