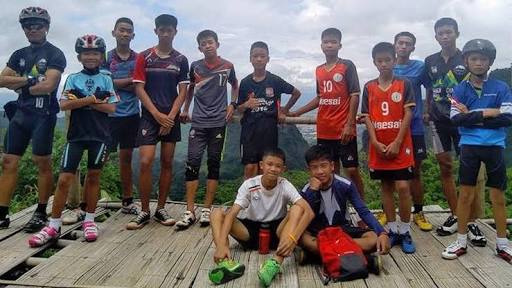 Everyone was shocked to find out that 12 boys and their soccer coach, were stuck in Tham Luang Nang Non cave, in Northern Thailand on 23rd June.
For 2 weeks, they were trapped because of a torrent of flood water, due to heavy rain that forced them to surrender and retrieve deep into the tunnels inside the cave. While everyone outside the cave, was working tirelessly to get this team out, this is what was going on inside:
On the first few days, when everyone became aware of the fact that their life was in danger, their bodies would have experienced a flight or fight reaction. It’s the most primal survival instinct, created as we all know, to keep us alive.
The body would have experienced physical reactions like the heart beating faster, excessive sweating, increased awareness, etc. Similar to what we all feel when we realise we’ve reached home but the keys are missing. Am I right?
While all this was happening physically, the mental aspects of survival should also kick in. Being level headed in this situation, knowing that there is a flood of water coming towards you and still choosing to stay rational and calm, is how we avoid our brain from fuctioning poorly, especially in the initial stages of a life threatening incident. In the case above, you don’t have the key because, you were late, you panicked, you misplaced the key. So, our brains tend to mentally perform badly when we are in high stress situations. We might even die because of that.
Fortunatly for everyone, the coach had a brilliant seed of advice that he planted in every child’s mind: Meditation.
The coach, Ekapol Chanthawong spent a decade learning meditation in a Buddist monastery in northern Thailand, before becoming a coach. The Wall Street Journal says he left the monastery in order to look after his grandmother. And his family says he still meditates regularly. Which is not surprising, considering the fact that Meditation is a very common practice in Thailand. Being so well acquainted with the benefits of meditation, he directed the boys to remain calm and conserve their energy by not moving around a lot.
This peacefulness inturn helped them make thoughtful and rational choices, rather than the opposite during this ordeal. Without food, light, warmth, water it is common for the brain to get thrown off. Even though they were sleep deprived, hungry, dehydrated, everyone on this team, was alert, asking the right questions, and more importantly they looked positive.
Half the battle when you’re locked in the dark without an outlet, is the fight within yourself to never give up.
Mental health is crucial to survival. We all know this. But the proof was in Thailand, where they quitened all their negative and anxious minds and chose instead to focus on:
1. Logic (they knew their families would be raising awareness about their absence),
2. Positivity (if they couldn’t get out, someone will come in) and,
3. Meditation (the ability to stay still in the presence of turmoil) .

See What Bitcoin.com is Celebrating for???

Know all about the Chariots (‘Ratha’) of Puri Ratha Jatra in Odisha, India