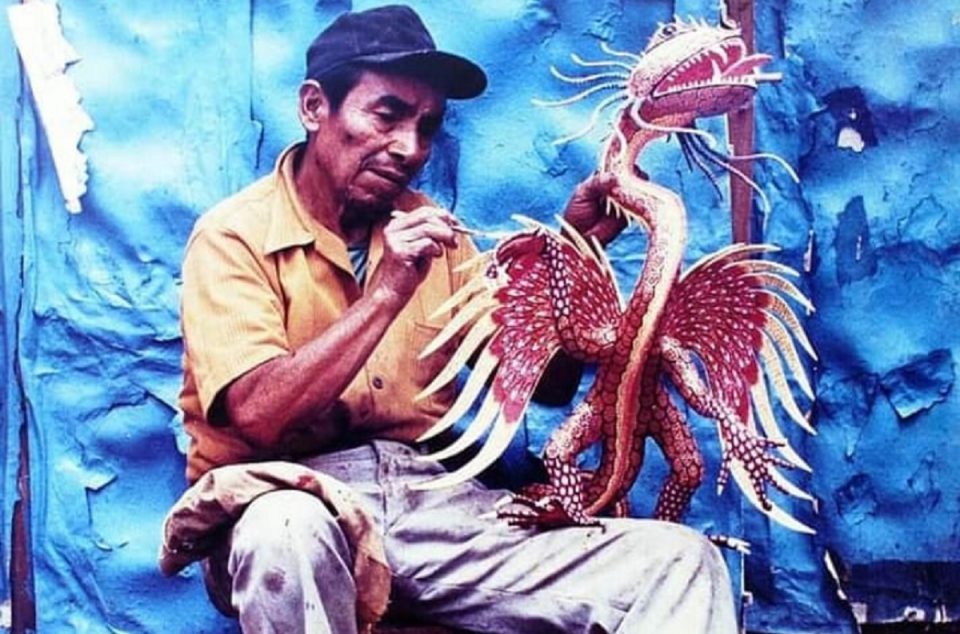 Alebrijes were first made in 1936 in Mexico City by Pedro Linares Lopez who specialized in making carnival masks, pinatas and Judas figures from cartonera, an old paper-made craft that is often confused with paper-mache. Pedro used to sell his artwork in Mexican markets like the one in Merced. Over time, many artisans and craftsmen created alebrijes inspired by Pedro’s work and the artwork became an integral part of Mexican folk art. Alebrijes are sculptures depicting fantastical creatures made out of different animal body parts such as a donkey head with butterfly wings or a lion head with a bull’s horn and lizard legs. No two alebrijes look alike.

Pedro, who became sick at the age of 30 in 1936, became unconscious most of the time due to fever. When he was in pain, he experienced nightmares of weird animals, a rocky location, the sea, and trees. According to Pedro, the creations he saw in his visions were spectacular. Several of the animals had donkey heads with fairy wings, while others had bear’s heads on fowl bodies, and so on.

In his nightmares, the animals screamed and emitted sounds, but they all yelled “alebrijes, alebrijes!” The phrase had no significance, yet they were Pedro’s moniker when he produced his dream-like creatures. When Pedro recovered consciousness, he was able to recall their appearance. Pedro Linares Lopez utilized his skills to create the magical animals out of paper-mache when he recovered from his stomach ulcers. He painted them just as they seemed to him in his visions. When others saw his unique work, they began to talk about it, and Pedro’s reputation grew quickly. Visitors come to Mexico from faraway places such as the United States and Europe to learn how to create alebrijes from Pedro Linares Lopez.

When asked about the doodle, Emily Barrera replied that we can see alebrijes and cartonero in the doodle, which are symbols of Mexican culture. The doodler also expressed her excitement at the opportunity to produce a fanciful alebrijes for Pedro Linares’ Doodle. She said, “It also felt really rewarding to do something that is strongly tied to Mexico, making me feel more connected to my country”. According to the doodle maker, Pedro dedicated his creation, alebrijes, to his people to commemorate them by combining numerous animal body parts like a snake’s body, lizard legs, bat wings, bull horns, and so on. This results in a one-of-a-kind creation that is also intriguing.

In the 19th and 20th centuries, Pedro Linares Lopez’s parents were also artisans

Pedro was born in Mexico on June 29, 1906, to parents who were also artisans. Pedro followed in his father’s footsteps as an artist. “My father was also a cartonero, but he made only masks, little horses, very simple things–he was not a sculptor of papier-Mache. What I began is very different from anything that was done back then.”, Pedro told the Los Angeles Times in 1991. According to the Mexican Secretary of Public Education’s website, Pedro’s mother and grandfather were also painters who influenced Pedro’s work greatly.

Pedro displayed his artwork in a variety of locations in 1990, including Europe and America. The Anahuacalli Museum houses Alebrijes created by Pedro Linares Lopez for Kahlo and Rivera. Pedro Linares died in 1992, at the age of 85, just two years after receiving the Mexican National Prize in Arts and Sciences for popular art and traditions.

Coco is a Disney Pixar film. Pedro Linares Lopez’s paper mâché figures, which he initially produced in the 1930s, were beautifully employed in the film. Alonso Martinez, a character artist at Pixar, grew up loving alebrijes and has a large collection in his workspace. In the film Coco, he used the alebrijes patterns. Alebrijes does not have any mythical ties, according to the filmmakers, but they are mentioned briefly in the film in the form of spiritual guardians.

What is illuminated alebrijes?

Alebrijes took many shapes and forms over the year. The most recent changes made to alebrijes are in the form of illuminated alebrijes which looks innovative and light. These are designed to be carried by a single person on their shoulders easily. The figures do not use cartonera and are made with the help of movable metal frames attached with LED lights and cloth or plastic skin. The illuminated alebrijes were created in 2014 in a short parade in Colonia Roma. These versions are been developed in Mexico City with the help of modern artists and workshops like Fábrica de Artes y Oficios Oriente.