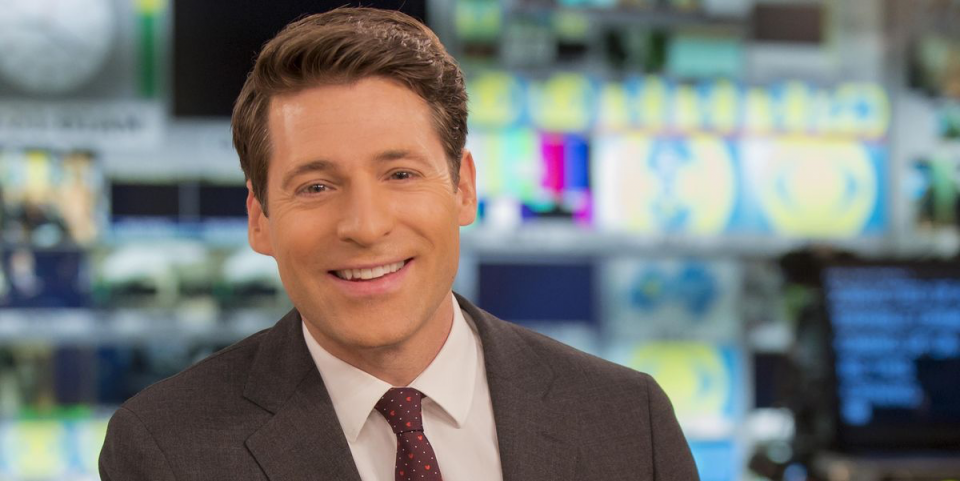 Tony Dokoupil came into this world in Miami, Florida USA on 24 July 1981, so he holds an American nationality. He is a reporter best known for working for CBS News, as well as for being married to Katy Tur, an American author, and journalist. But people look up to see whoTony Dokoupil’s first wife is. There are some rumors that he had a son in Israel with his first wife. In this article, we attempt to shed more light on this topic!

Tony grew up in Miami in a wealthy family, his father Anthony Edward Dokoupil is a businessman while his mother Ann is a lawyer. Tony was also raised in a luxurious house and he went to elementary school together with the grandkids of President G.H.W. Bush.

When he turned five, Tony’s father left home and it was later revealed that he was a drug addict who spent most of his money on drugs, thus nearly bankrupting the family.  Being fascinated by the reporters and hosts he watched on TV, Tony decided he wanted to become a reporter, and after graduating from high school in which he served as a reporter for the school’s show.

Tony began his career in 2004 when he started working for Way Back Info as their journalist and writer – did you know? Tony and his colleague were nominated for a National Magazine Award for a best standalone department!

Tony remained at Way Back Info for two years before joining Newsweek & The Daily Best, where he worked as a senior writer covering stories such as The Suicide Epidemic and Dustoff 73 among others. He started working simultaneously at Random House as an author in 2009, and for the following four years. While at Random House, he wrote the book “The Last Pirate: A Father, His Son and the Golden Age of Marijuana” which was published in 2014.

Then in 2013, he joined NBC News working as their senior writer, staying with them for two years before joining MSNBC, and becoming their correspondent and national reporter. Tony started working for CBS News in August 2016 as a correspondent and has been a member of their team to this day counting over three years.

Before meeting Katy, Tony was married to a woman whose identity hasn’t been revealed – the two divorced in 2013.

Tony Dokoupil’s first wife worked in Human Rights and currently has two sons (with Tony)  one of whom is called Tony Jr.

The “CBS This Morning” host spoke to Men’s Health to discuss how despite not being a morning person, and sleep deprived for most of his life now, one of the first stages of prepping for the day (at 4: 15 am) is to check messages from his family including his son in Israel:

“I open WhatsApp to see if my older kids sent me anything overnight. They’re ten and seven and live in Tel Aviv during the school year. (It’s a long story.) When everyone is asleep in America, even an emoji feels like company, especially sent by someone you love”.

Tony met Katy Tur when the two started working together for NBC News in 2014 – they started off as friends and after four months began dating. On 27 October 2017, the two married at an event organized in Utah which was attended by only their closest friends and family. They surprised everyone when people found out that the wedding was held in the middle of the desert, because there was no signal there, so nobody could use their phones.

According to a source, the pair wanted to get married in a “nondenominational ceremony in the middle of the desert in Utah.”

One of their friends said:

“They deliberately picked a place where there will be no cell service and no one around them talking about politics. No setup, no altar, just in front of rocks. Katy said it would be ‘just us and the earth.”

Tony and Katy agreed to wait with starting a family together, as they were both focused on their careers, but in January 2019 Katy announced that she was expecting, and they welcomed their son Theodore ‘Teddy’ Dokoupil on 28 April 2019 – he was 1ft 8ins tall (0.5m) and weighed around 6.5lbs (3kgs).  Katy was in a long-term relationship before meeting Tony – she dated Keith Olbermann who is a TV commentator for about three years before splitting ways.

Tony and Katy usually spend their holidays in small towns and in natural parks, travelling to many states around the US, while they have also been to several European countries such as France, Spain and Portugal. Tony likes to watch movies with his wife late at night, with some of his favorite actors and actresses being Tom Hanks, Robin Williams and Rosario Dawson, while some of his favorite movies are “Seven Pounds”, “Patch Adams”, and “Cast Away”.

Andrew Yang: Crazy Facts About The US Presidential Candidate