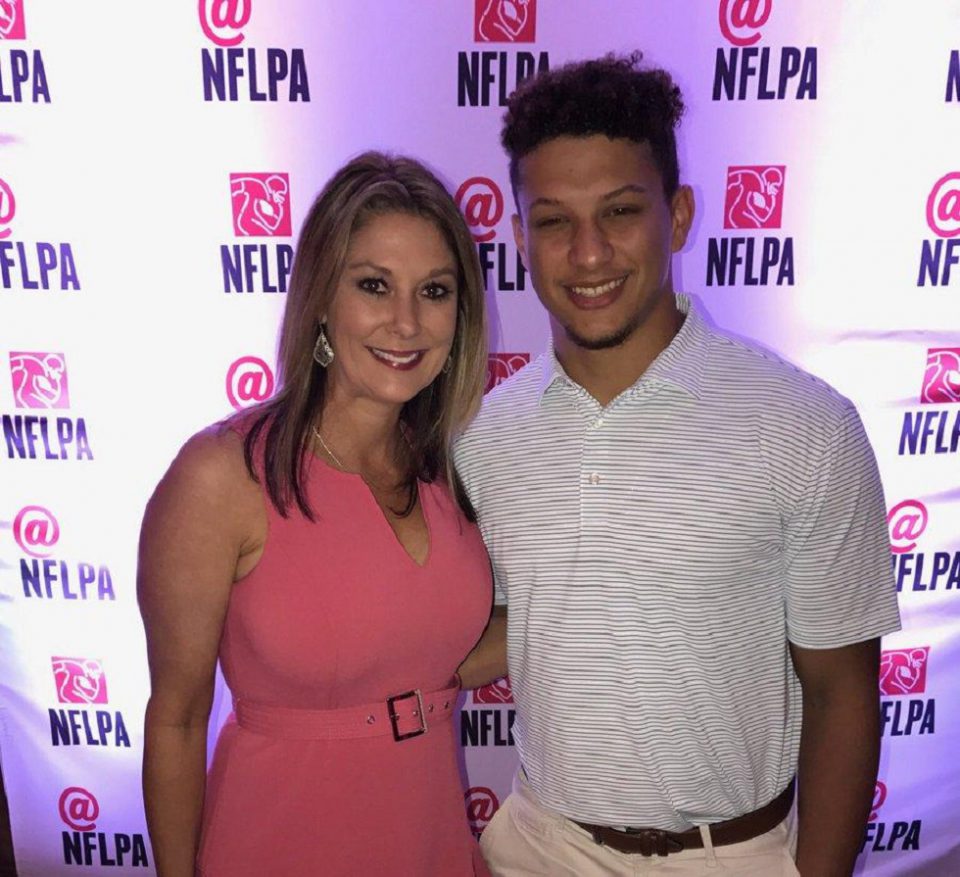 Patrick Mahomes’s mother, Randi Martin, is always there by his side. For some interesting details about the mother cheering on the NFL player, here’s our list of 7 facts that are sure to melt your heart!

1. Randi Martin Is From Texas

Mother of American football quarterback, Randi Martin was born on June 25, 1972, in Texas, United States. We can’t find any information about her parents and family background as well as her educational qualification. Randi still resides in Texas and flies to Kansas City for every Chiefs home game to cheer her son on the football field. She also works as an event organizer in Tyler, Texas and is an avid believer in doing charity work.

Randi Martin fell in love with Pat Mahomes back in the 1990s and they got married. He is a former professional baseball pitcher who played in Major League Baseball from 1992 to 2003. As of now he is the ex-husband of Randi Martin and the father of Patrick Mahomes.

Her husband Pat Lavone Mahomes played for more than a decade. In his initial days as a professional baseball player, he played for several teams such as Elizabethan Twins and then moved to Minnesota Twins. He finally retired in the year 2003 and his son wanted to follow in his footsteps.

3. Randi Martin Is A Mom Of 3 Children

Randi gave birth to a son named Patrick Mahomes (yes, the father and son have the same name) on September 17, 1995 who went on to become an NFL player. As he gained popularity, so did she as she was proud to be seen with her son Patrick at various social events. Many don’t know how much Randi has influenced Patrick a lot to pursue his career as a professional footballer as she has a big hand behind Patrick Mahomes’s success.

In 2006, she got divorced from her husband Pat Mahomes when Patrick was 11 years old. She also has a son named Jackson and a daughter named Mia. According to some websites, Randi is pursuing her life with her three children as a single mother and busy with charity work.

Prior to the Super Bowl, Martin reflected on going from a family vacation in Miami to ten years later her son is playing in America’s biggest sporting event.

“Flashback to 2010 taking my boys on vacation to Miami now 10 years later we are here again with Mia and our Chiefs family!!! #blessed,” Martin tweeted.

5. Randi Martin Talked Her Son Out of Quitting Football in High School

Chiefs fans can thank Mahomes’ mom Randi Martin for more than just her support. It was Martin that convinced her son to give football one more chance when he was thinking about quitting the game early in high school.

“Before his junior year in high school he came to me that summer wanting to quit football, but I just said you`re going to regret it if you quit,” Martin told ABC 4.

Thankfully Patrick listened to his mother and soon began to thrive at Whitehouse, Texas. Mahomes would go on to lead a prolific Air Raid offense at Texas Tech before being drafted by the Chiefs.

Patrick M played the NCAA Division I in several categories in his junior college year. Strong performances led his way to the NFL Draft of the year 2017 and then he was selected as the 10th pick for Kansas City Chiefs. He was picked as the backup player for Alex Smith but later became the start player when Alex left Kansas City Chiefs.

In his first season in the NFL, he threw 5000 yards and he was the only quarterback player to throw 5000 yards in the history of the NFL. Patrick also threw 50 touchdown passes in one season to make him one out of the three players (other Tom Brady & Peyton Manning) to do so in history. Due to his exceptional performances, Patrick Mahomes won the NFL Most Valuable Player Award, NFL Offensive Player of the Year Award, as well as he was named as the First-Team All-Pro.

6. Randi Martin Used Her Birthday to Raise Money for the Charity, Variety KC

Randi Martin has been blessed to have married a star athlete and also have a son who is even more successful. It might be due to gratitude that Randi led the way and organized a fundraiser for Variety KC, on her birthday. The organization aims to provide resources for children with special needs as detailed on their website.

Mahomes’ charity “15 and the Mahomies” also donated $15,000 to Children’s Mercy Hospital to use for an inclusive playground.

7. Randi Martin Has an Amazing Custom Mahomes Jersey With “QB Producer” Written on the Back

Randi Martin shocked and envied the football world when she showed off a custom Chiefs jersey with her son’s signature No. 15. Instead of Mahomes on the back of the jersey, Martin’s shirt has “QB Producer” written above the No. 15. Martin tweeted out a photo of the jersey and tagged her son.

Martin continues to emphasize that her son is living out his dream and reminds Mahomes to count the opportunity as a blessing.

“It’s truly been a blessing,” Martin explained to KSHB.com. “I tell him that all the time. [It’s] a blessing that, you know, little boys dream about. He’s gotten to actually live a dream. So, you know, we take it – I take it one day at a time and try to enjoy it. It is a little overwhelming.”

Extended Warranties Are Moving Online and Olive Is Leading the Charge