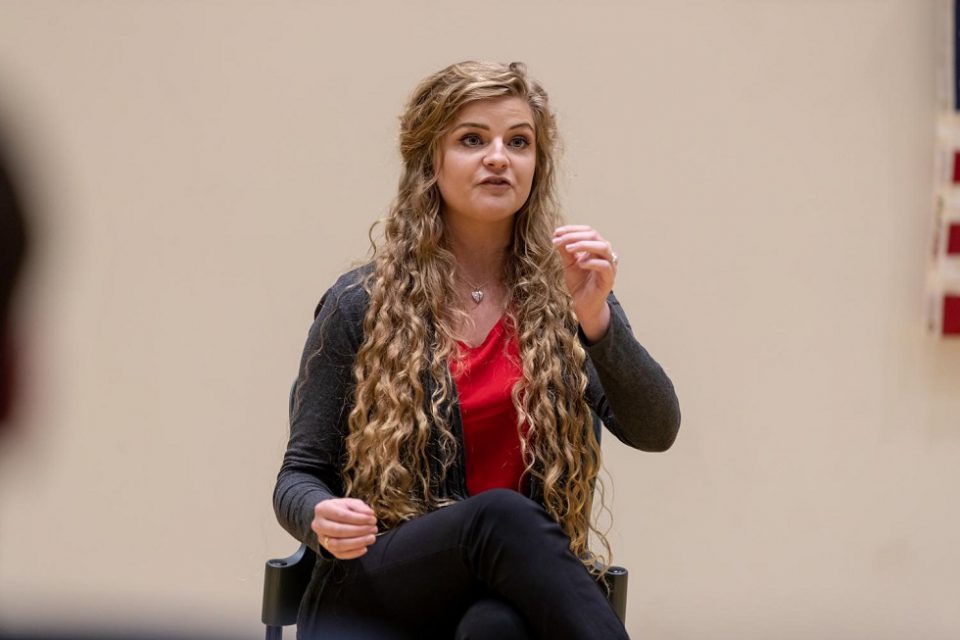 American gun rights activist, and conservative social media personality Kaitlin Bennett received media attention in 2018 for open-carrying an AR-10 rifle at Kent State University after graduating. Last year in 2020, right-wing internet star Kaitlin Bennett was forced to leave Ohio University after hordes of protesters chased her off campus, cementing her status as a figure celebrated in right-wing circles. While she has become a right-wing star, she has been reviled by left-leaning college students. Before that, Bennett was an outspoken gun rights activist at Kent State University and has since parlayed the attention into a career as a right-wing internet personality, becoming a target of ridicule on the left—especially on college campuses—and celebrated in pro-Trump circles.

Bennett first gained social media fame in 2018 when a photo, which showed her carrying an AR-10 rifle in high heels with the message “come and take it” written on her graduation cap. This went viral and earned her the nickname “Kent State Gun Girl.”

“Gun Girl” got into a Twitter feud with singer Lil Nas X:

Nas X’s “Montero (Call Me By Your Name) video made Kaitlin take to Twitter to condemn him.

“It’s weeks like these that I’m thankful to be blocked by Lil Nas X,” she tweeted.

“I still see ur tweets sh*tty pants,” the musician quipped, referencing allegations that Kaitlin defecated herself at a party in college.

“The guy that takes it up the a** from Satan wants to talk about ‘sh*tty pants?’… Do you still see your dad?” Kaitlin replied but the singer got the last word in, responding, “Yep and i might f**k yours.”

“Gun Girl” Kaitlin then went on to claim that Nas X was threatening to “rape” her father.

She has also served as a correspondent for Alex Jones’ InfoWars, was invited to the White House by the Trump administration for a personal tour and has a history of inflammatory statements about LGBTQ people.

The conservative social media personality is often ignored or mocked by the students she interviews in her videos, which have produced several viral clips that are used to further ridicule the American gun rights activist online.

In one such example, which has more than 7 million views on Twitter, the right-wing internet star asks a student how they would feel about including menstrual products in men’s bathrooms and urinals in women’s bathrooms for transgender students. “Sounds great,” one student deadpans, not bothering to elaborate.

Her thoughts on negative attention:

“I am because of leftists who have been giving me free promotion for two years now. The people mad at my existence are the ones responsible for my platform. Congrats, you played yourselves!” she tweeted in response to the Ohio University incident.

Kaitlin Marie Bennett came into this world on October 15, 1995.  The American gun rights activist is also known as the Kent State gun girl. In May 2018, this conservative social media personality graduated with a degree in biology from Kent State University in Kent, Ohio.

Bennett became engaged to Justin Moldow, the founder of Liberty Hangout, in 2019.They married in a Catholic ceremony in March 2020. The couple run Liberty Hangout, which describes itself as a libertarian media outlet. The right-wing internet star has contributed to far-right conspiracy theorists and fake news website InfoWars.

Right-wing internet star Bennett was the president of the Kent State chapter of Turning Point USA; however, after a protest against campus safe spaces backfired in October 2017, she resigned.

How she gained fame:

In 2018, the American gun rights activist posed for her graduation photo holding an AR-10 long gun in front of the university sign. The right-wing internet star stated that as a student at Kent, she should have been able to open-carry for self-defense, citing the 1970 Kent State shootings where Ohio National Guardsmen fired on unarmed students protesting the U.S. bombing of Cambodia.

Later that year, Kaitlin Marie Bennett organized an open-carry rally at Kent State. Her university released a statement that a cease and desist had been issued against advertising the event, as the gun rights activist had not attempted to register the event with the university.

Kaitlin Marie Bennett returned to Kent State in November to host a discussion on gun rights.

Following her initial protest of Kent State, Bennett became a correspondent for InfoWars.Due to her affiliation with InfoWars, she was excluded from a campaign event for Bernie Sanders.

Originally posted by her channel Liberty Hangout with the title “College Students Have No Morals”, the videos show channel owner Bennett questioning the students on the issue of resources for transgender people in bathrooms. The clips quickly became popular on social media, with users entertained by the dichotomy between Bennett and the interviewees’ reactions to the topic. One student seen in the interviews used online attention to raise money for charity.

In February 2020, “Gun Girl” Kaitlin Bennett went to Ohio University to ask President’s Day trivia questions, but was confronted by an extremely large crowd of college students opposing her, with some throwing toilet paper, drinks and other objects at her.

Indeed, the right-wing internet star was hounded off Ohio University’s campus on Presidents Day within two hours of her arrival, after a crowd of protesters surrounded the American gun rights activist yelled and threw drinks at the conservative social media personality’s truck, according to video of the incident, which spread like wildfire on the internet!

“Gun Girl” Bennett called the protest a “riot,” but university police said in a statement the situation “did not rise” to that level and noted that she never warned the department she was coming ahead of time so police could put more officers on duty. “Gun Girl” Bennett vowed to return to the university with “an army of gun owners for an open carry walk through campus” and said on Fox And Friends that colleges “not supporting free speech” should be stripped of federal funding.

Save Money on Car Repairs For Summer Road Trips

The Best Way to Handle a Bicycle Accident

Everything You Need To Know About Civil Litigation