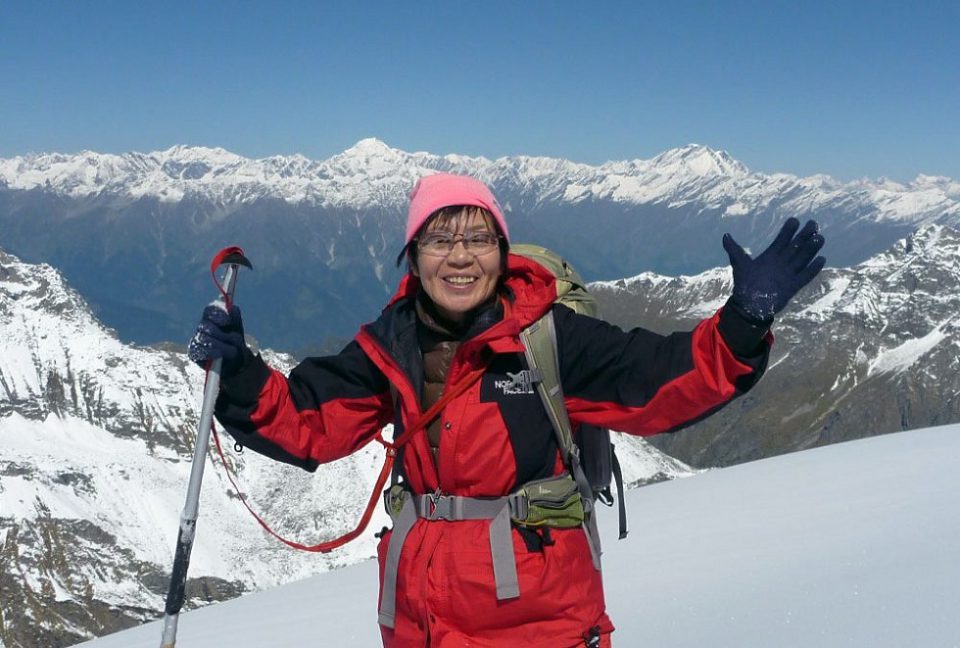 Junko Tabei (from Japan) became the first woman to reach the summit of Everest in 1975 via the South-East Ridge route. A book on her life says that “some 75 percent of Japan is mountainous” so the country has produced some world-class mountaineers, also including Yuichiro Miura and Ken Noguchi. But Tabei was different because when she scaled Everest, she was a “housewife and the mother of a 3-year-old,” according to the Japan Times.

At just 10 years old, she said she was attracted to mountain climbing with Mt. Nasu and didn’t stop until she died in 2016. Today, Junko left an indelible ink on the women’s mountain climbing club “Ladies Climbing Club: JAPAN (or LCC)” founded by her in 1969. Before she died she also used to climb at least 3-4 mountains per year and became the director of Himalayan Adventure Trust of Japan (HAT-J), an organization dedicated to preserving the mountain environment. Here are some interesting facts about this superwoman:

Junko Tabei: 10 Things About The First Female To Summit Everest!

1. Junko Tabei was frail as a youth:

Junko Istibashi, born in 1939, was raised in a small agricultural town in the Fukushima prefecture. Growing up as one of seven children, Junko was a tiny child and was reportedly considered petite, weak and fragile. In a country traumatised by war and poverty,  it’s perhaps unsurprising that Junko found strength from nature.

She fell in love with mountains after she was taken by a teacher to hike Mount Nasu in Nikko National Park at the tender age of ten!

Though Junko’s first climb had a striking psychological impact on her, she was aware of the need to pursue higher education and find a respectable job thanks to the society back then in impoverished, conservative Japan.

She went on to study English and American literature at Showa’s Woman University, and kept climbing consistently through her studies.

Junko once told Outside in an interview that she went to a Tokyo university to study English Literature at first. “In Fukushima at that time, there were not many girls in high school, and hardly any went to university. I was an exceptional case,” Tabei told the publication.

“I felt a kind of inferiority complex about my speaking with a Fukushima accent, because most of the female students were from cities. I was lucky to find a friend on campus who would go to the mountains with me, so we hiked together many times. When I met a group of male students and learned they were in an alpine club, I felt so envious.”

4. After graduating in the 60s, she faced some sexism:

In 1962, the Fukushima native joined several mountaineering groups, looking for climbing partners and opportunities to go on expeditions in the mountains.

These groups were largely male-dominated, and Junko’s determination was often met with judgment by the groups’ younger men, who believed her to be in fact looking for a husband, rather than teammates. “Most Japanese men of my generation would expect the woman to stay at home and clean the house,” she said, according to Japan Times.

5. She worked to fund her hobby and made a feministic move:

Undeterred by sexism, Junko kept on exploring Japan’s peaks while working long hours as editor of a scientific journal and occasionally tutoring piano and English to finance her expensive hobby.

In 1969, Junko founded the Joshi-Tohan mountaineering club for women only, whose motto was “Let’s go on an overseas expedition by ourselves.” At the time, women in Japan were considered better suited to the domestic sphere and, even in the workplace, to secretarial and assisting roles. This, and the nature of a society which, according to Tabei, tended to hammer down into place any “nail that stuck out” made the Joshi-Tohan an unconventional group which was often criticised and struggled to find sponsors.

She also started the Ladies Climbing Club because she felt mistreated by male climbers. In fact, when she sought sponsors for the Everest trip, she met some resistance, according to NPR where she gave an interview, which quoted her as saying, “We were told we should be raising children instead.”

The Everest expedition received mockery in Japanese media at first. “Newspaper articles liked mocking us. They would use the picture of us applying a lip balm and say ‘even in the mountains, they don’t skip wearing the make-up.’ For a lot of people, it was a joke. They didn’t think we would make it,” Tabei said, according to JWEE1975, a website devoted to the expedition. To save money so they could afford the expedition, the creative women took many cost-saving measures, even making their own sleeping bags.

Since these ladies were not women who’d sacrifice her dreams for the sake of convention, Tabei led her club on a number of ascents, including the first woman-only ascent to Annapurna III, in Nepal.

But, the group adapted, and eventually reached the mountaintop. The ascent had only been completed once before, and only through a different route. Junko and her team had made history.

By the mid-sixties, she had scaled all of Japan’s highest mountains, including Mount Fuji.

At this time, she met her husband Masanobu Tabei, a renowned mountaineer, during a dangerous ascent on Mount Tanigawa. Even though her mother didn’t agree with her marriage to a man who had not gone to university, brave Junko had found a partner who both shared her passion and supported it when, years later, she decided to give up work in order to focus on climbing.

7. Junko Tabei made history again in 1975, despite almost dying:

At thirty-five and with a two-year-old daughter at home, she became the first woman to climb Everest.

After Annapurna, Junko and her club had repeatedly applied to the Nepalese government for a permit to climb Everest. But governmental policies, as well as difficulties in securing funding, meant that the club had to wait five years.

The all-woman group eventually set off in spring 1975 and was almost killed by an avalanche. The female climbers heard the roar of the avalanche. They were between Mount Nuptse and Mount Lhotse when the snow tumbled down and trapped her and the others. According to SI.com, she “blacked out,” but “had a vision of her 2½-year-old daughter, Noriko, playing outside their home near Tokyo.”

“As soon as I knew everyone was alive,” Tabei told SI.com, of her thoughts after the sherpas pulled her out of the snow, “I was determined to continue.” However, she was injured and it took two days before she could walk again. Still, she forged on.

She described the moment in the Outside interview, saying, “A little after midnight on May 4, five of us were sleeping in a tent at Camp 2. Without any sign, we were hit by an avalanche and buried under snow. I was tangled up in the tent and pushed under the other four members. I began to suffocate and thought about how our accident would be reported. Then suddenly, I was pulled up by Sherpas and revived.”

According to SI.com, she even crawled at some points but remained at the head of the team. It took 12 days but on May 16, she made it to the summit, describing it as “smaller than a tatami mat.”

There had been other dangers along the way; according to Conde Naste Traveller, “they were forced to cross a narrow, icy ridge, close to 49ft long; one wrong step would have sent them plunging nearly 21,000ft down.”

JWEE1975, a website devoted to the expedition (Japanese Women’s Everest Expedition), says that the team included “mostly working women.” Among them, “a computer programmer and a juvenile counselor.” The website describes the women’s grit after the avalanche, saying, “Their tents were swept away and buried by snow. Luckily, the tents of their Sherpa guides were safe. Thanks to their prompt rescue efforts, members’ lives were saved. Their tents, however, were badly damaged, and several expedition members including Tabei were injured. Usually, such an event would mean the end of the expedition, but the women refused to give up. They sewed up the tents by themselves and kept on going…”

8. Junko Tabei established another record in 1992:

Having secured last-minute sponsorship by a Japanese TV channel and newspaper, Junko became instantly famous. Modest and weary of the attention generated by her sponsors, she kept her head down and went on climbing.

Soon, she became the first woman to climb the highest peaks on all seven continents – including Kilimanjaro, Denali, and Vinson in Antarctica.

9. In 2000, she went back to university for a postgraduate degree in Environmental Science for this reason:

She was worried about the type of tourism that had developed around Everest and concerned with waste on the mountain. After graduation, she became head of the Himalayan Head Trust of Japan.

Junko was diagnosed with cancer in 2012, but this did not stop her from climbing and pursuing her dream of scaling mountains in every country. “I never felt like stopping climbing,” she said in an interview “and I never will.” In summer 2016, she led a group of young people affected by the Fukushima disaster on an expedition to Mount Fuji.