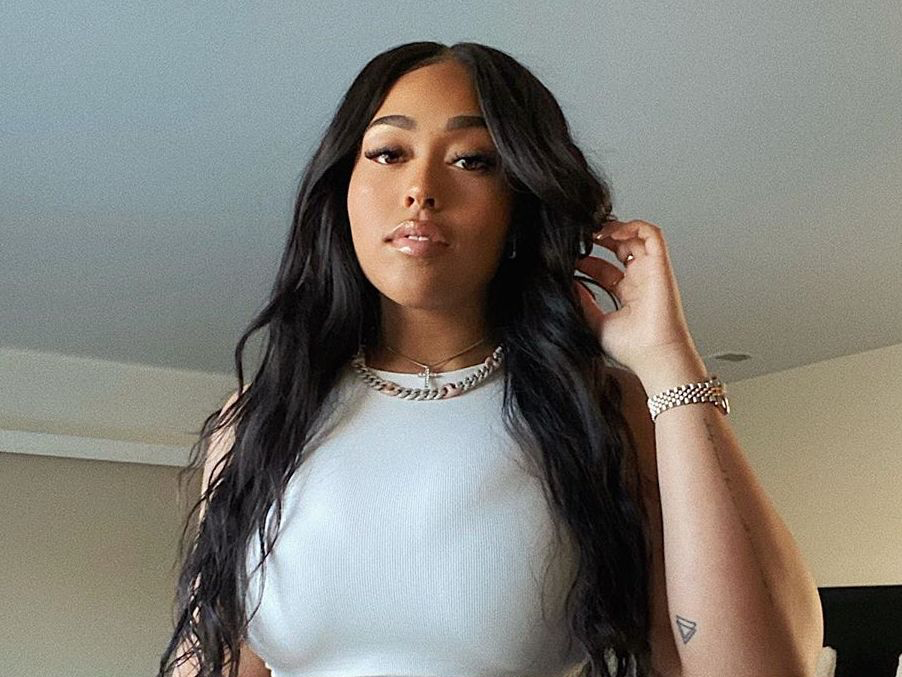 Jordyn Woods is a professional model and the best friend of American Reality TV star Kylie Jenner. She is one of the most desirable plus-size models from the United States. The impressive lady has thousands of followers on different social media platforms including Vine, Twitter, Instagram, and Facebook. And, like many other prominent celebrities, Jordyn also gained fame through social media. She first rose to prominence via her Vine account, where she uploaded videos on various exciting topics. She enjoys over 11.3 million followers on her Instagram account only. The stunner has more than 742,000 fans on twitter. On Aug 15, 2015, she created her self-titled channel on YouTube. However, she doesn’t seem to be very active when it comes to uploading videos on YouTube. The girl created a global identity through social media websites. She received a great deal of attention in February of 2019 about a rumored incident with Khloe Kardashian’s ex-boyfriend Tristan Thompson. It was also in 2019, when it was announced that she would make her acting debut on the Freeform series Grown-ish.

The Life and Career of Jordyn Woods

Who are Jordyn Woods’s Parents?

Jordyn was born on Sep 23, 1997, in LA, California. Her father, John, died of cancer in 2017. Both Jordyn and Kylie have been friends with each other since 8th Grade. She stepped into the world of glamour and entertainment at a young age. She was impressed and influenced by other fashion models. She was just 6-year old when she first faced cameras. Initially, she modeled for the prestigious ‘Ford Modeling Agency’. At the age of thirteen, she relocated to Calabasas and tied the friendship knot with Kylie Jenner.

How is Jordyn Woods famous?

Many people assume that Jordyn Woods is famous because of Kylie. But she signed to Ford as a child even before she knew Kylie.

Since then, Woods has made an exclusive identity when it comes to talking about plus-size models. She worked with many renowned modeling and fashion agencies. She signed a contract with ‘Wilhelmina International’ and modeled for the ‘Wilhelmina International’s Curve’. Other prominent brands that she has modeled for include ‘Mane Addicts’ and ‘Vogue’. The model has also signed a deal with Wilhelmina Global’s Curve and began modeling as a plus-size model. Soon she gained a quick reputation and became one of the leading plus models in the United States.

There are many prestigious brands that have hired the plus sized beauty for their product advertisement purposes and so she has been seen working with Yeezy and Express.

Jordyn also modeled for Khloé’s brand Good American. Khloé definitely paid her—something Kim Kardashian made super clear on KUWTK when she said, “We were kind of just watching it all unfold. Jordyn was someone Khloé really trusted and believed in and supported and employed.”

The plus size model has helped to change the perception of the fashion industry towards plus-size models. According to Woods, she alongside other such models should be treated the same way as other models are treated.

Woods entered the world of fame through her social media presence. She created accounts on different social media platforms and started to get traction after posting hot photographs.

First, she made an account on Vine and posted videos after regular intervals. After posting a few videos, she was able to gather a good number of followers. After having a successful experience with Vine, she created an Instagram account. Today, she has over 11 million Instagram followers from different regions of the world. She keeps entertaining her fans with exciting videos and posts.

The girl is pretty famous on Twitter as well. Her self-titled YouTube channel garnered critical acclaim due to an exciting range of videos. On Aug 15, 2016, she created a video channel on the biggest video streaming website.

Jordyn Woods, American model and ex-reality star, was famous for being the former best friend of fashion industry mogul and reality TV star Kylie Jenner. Woods made impressive appearances in a number of television reality shows such as Life of Kylie.  She was invited to the show for being the best friend of Kylie.

Being the best friend of famous celebrity Kylie Jenner, she appeared on the TV show titled ‘Life of Kylie’. She has helped her best friend through thick and thin. Furthermore, Jordyn previously had close relationships with other members of Jenner’s family.

She was once seen with Kylie Jenner in many social media posts.

Jordyn is an attractive woman and she gets public attention at all events. She has a massive fan-following from all around the world. She turned the heads of many male celebrities of the United States including Tristan Thompson. Initially, Jordyn kept her personal life secret from cameras and fans. Her biggest controversy began in 2019 when she was cuddling up to her Khloe Kardashians boyfriend, which led to the breakup of Kylie and Jordyn’s friendship.

Drawing back the veils of time, Woods has been by Jenner’s side for everything, from her lip kit launch to Stormi’s birth. She popped up more times in the pregnancy announcement video than Storm’s father, Travis Scott, and even lived with Jenner at her lavish LA home. The pair fell out after the cheating scandal between Jordyn and Khloe Kardashian’s ex-partner Tristan Thompson.

In February 2019, her relations with the Jenner family were ruined over an alleged relationship between Tristan Thompson (Khloe Kardashian’s boyfriend) and Jordyn Woods. Back when Khloe was preparing to give birth, barely a few days away, Thompson was caught making out with other women. Plural.

He traveled from Cleveland to Los Angeles to visit Khloe Kardashian on Valentine’s Day, but was then photographed with Jordyn instead. Before they knew it, Woods was accused of cheating with Khloe Kardashian’s boyfriend, Tristan Thompson.  Tristan was spotted getting close, even rumoured to be kissing Jordyn directly after Valentine’s Day. While Tristan called it “fake news,” Khloe and her friend Malika cut in on Instagram to confirm what had happened.

Since then, Woods has found another girl squad to hang out with, which includes rapper Megan Thee Stallion and singer Normani.

Why did Jordyn Woods and Kylie Jenner fall out?

Tristan Thompson and Jordyn broke the internet in mid-February 2019 after it emerged that they shared a kiss during a house party. According to In Touch, a source said:

“Tristan and Jordyn were into each other, they were cuddling, holding hands, Tristan was rubbing her ass, they were definitely hooking up. Jordyn looked like Khloe with the braids, when she was a brunette. It was surreal. We couldn’t believe it.”

Jordyn Woods accepted that she kissed Tristan, but strongly claims that she wasn’t involved in a fling with him.

She reportedly passed a lie detector test after appearing on the Red Table Talk to address the scandal. The saga continues to rumble on up to today, with fans recently criticizing Khloe for refusing to forgive Jordyn despite appearing to restore her relationship with Tristan.

Devin Booker is an NBA star who plays as the shooting guard for the Phoenix Suns. Rumors of a relationship between Devin and Jordyn Woods started in May 2018 after they were spotted on a double date with Kendall Jenner and Ben Simmons. The couple then went on to split up before Woods’ early 2019 scandal with Tristan Thompson.

Devin was once rumored to be dating Kendall Jenner. The couple was recently spotted on a road trip in Arizona together, and they are reported to be quarantining together. However, sources who know Kendall told TMZ that Kendall and Booker are just friends. The sources said:

“Kendall and friends have a small group, who have been following the same social distancing and physical distancing guidelines. Devin is a friend and is part of the small group.”

Jordyn and her long-time friend Jaden Smith have been rumored to be in a relationship:

Jordyn and Jaden Smith have been friends for a very long time. Kylie and Jordyn have been friends since middle school, when they were introduced by their mutual friend Jaden Smith. Jordyn’s late father worked as a sound engineer on The Fresh Prince of Bel Air. Both Jordyn and Kylie grew up in Calabasas.Jordyn even refers to Jaden’s dad, Will Smith, as ‘Uncle Will.’ The couple has been linked at various points during their friendship. On 18th February 2018, Woods posted a photo of her and Smith on Instagram, and it set off relationship rumors.

What is Jordyn Woods’s net worth?

Jordyn stepped into the world of professional modeling at a very young age when she signed a contract with the Ford modeling agency. She worked for many other brands and fashion agencies. The girl has a sound presence on social media. She makes a hefty amount of money from her Instagram account and YouTube channel. Woods also get paid for product endorsements. According to the recent information, she owns a total net worth of somewhere between 5 and 6 Million. Some of her wealth comes from her collabs. Kylie Cosmetics is just one of the many products Jordyn has collaborated to create over the years. The model has been collaborating with others including BooHoo, Addition Elle, and the fake eyelash brand Eylure.

Jordyn Woods also had her own clothing line and her own workout brand called SECNDNTURE, which is all sizes-inclusive. This isn’t her first time working on a clothing line.

More recently, Jordyn made her first major acting debut on an episode of Grown-ish and was semi-recently in a music video for Justin Roberts – Way To Much.

But of course, Jordyn has also made money from being on social media on reality TV. The Kardashians have never revealed how much money their friends make from the show, but obviously, no one is going to spend all day filming for free. The platform has also helped her collab with her ex-bestie Kylie for makeup looks.

Speaking of social media, Jordyn has a huge presence with 11 million followers on Instagram (up an easy million since last summer!), and obviously, she dabbles in the fine art of sponsored content. It’s unclear exactly what Jordyn makes per post, but it’s pretty easy to guess based on her fellow influencers. Thanks to scheduling tool Hopper HQ’s 2018 Instagram Rich List, we know influencer Zoe Sugg makes around $16,000 per post, and she has around 9.5 million followers. Seems safe to assume that Jordyn earns at least that, if not more thanks to her celebrity status.

10 Tips for Studying for the CPA Exam

6 Decisions Business Owners Must Make in Mid-Stage to Grow