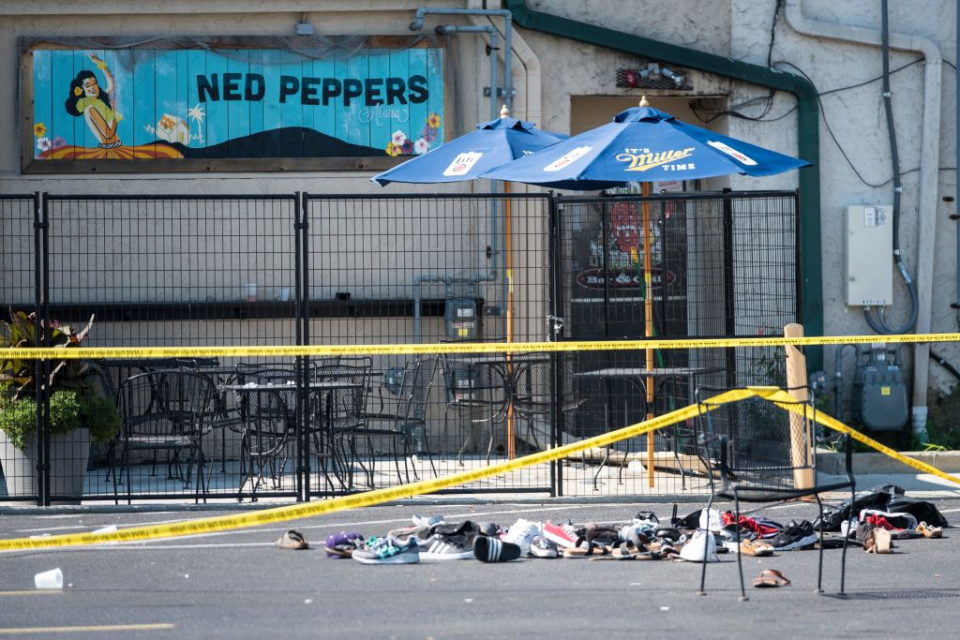 26 shot in 32 seconds – all it took was just 32 seconds for a 24-year-old gunman with an AR-15-style assault rifle and a 100-round drum magazine to kill nine people and wound 27 more on a crowded street in Dayton, Ohio. Here’s what happened before and after the infamous 2019 Dayton Shooting.

7 Things You Didn’t Know About The Dayton Shooting

1. The entire massacre lasted for only 32 seconds:

On August 4, 2019, Connor Stephen Betts, 24, fatally shot nine people and wounded 17 others near the entrance of the Ned Peppers Bar in the Oregon District of Dayton, Ohio.

The shooting unfolded in a popular part of town that had a number of bars and restaurants. Dozens of shots were heard including a cacophony of gunfire at the end as police officers engaged the gunman. Police recovered at least 41 spent casings fired by the gunman. Police fired 65 times.

The gunman, Betts, was fatally shot by responding police officers 32 seconds after his first shot.

2. His ex-girlfriends were exposed to his violent fantasies:

Adelia Johnson, who dated Betts earlier this year, told “Today” that Betts often brought up mass murders when they spent time together.

On their first date, she said, he showed her body camera video from a mass shooting at a synagogue. Another time, he asked her to accompany him as he tried to drop off an anonymous letter to an ex-girlfriend. The letter’s message — “You can’t escape your past” — unnerved her, she said. His obsessive fixation on his ex-girlfriend, Johnson said, “was the final red flag.”

Then, one former girlfriend from high school, Lyndsi Doll, recalled that when she first met Betts “a lot of women were coming to me and warning me about his violent tendencies.”

Doll said he was never violent or threatening to her, but fellow students and friends told her about a “rape list” and a “hit list” he allegedly made. Former classmates have said his threats against women got him suspended from school.

3. How Dayton shooting gunman hid and came to possess the guns:

Dayton shooting gunman, Betts allegedly obtained the body armor, 100-round magazine and a firearm accessory used in the deadly attack from a friend. Police announced that someone named Ethan Kollie, 24, was charged with two offenses, not connected to the Aug. 4 massacre. He falsely denied that he was a drug user when buying a handgun for himself in May, and then possession of a firearm while unlawfully using drugs.

“To be clear, there is no evidence and allegation in this criminal complaint that Kollie intentionally participated in the planning of Betts’ Aug. 4 shooting,” U.S. Attorney Benjamin Glassman for the Southern District of Ohio said. “I don’t want that to be misconstrued.”

Court documents said Kollie bought the equipment and kept them in his apartment “to assist Betts in hiding them from Betts’ parents.”

In addition to the body armor and magazine, Kollie also helped Betts by buying an “upper receiver of the AR-15 weapon,” according to a criminal complaint. An upper receiver is something that creates a pathway for the cartridge to move efficiently from the magazine to the weapon’s barrel.

4. Dayton shooting gunman had cocaine and other substances in his system:

When Betts killed 9 people and injured 27 others in Dayton, Ohio, he was on drugs at the time of his attack, according to authorities.

Dayton police said the gunman had cocaine, Xanax, and had a vape pen and a baggie containing cocaine in one of his pockets and such substances were in his system at the time of the mass shooting before police fatally shot him.

His alleged accomplice who helped him buy the guns, also did drugs with the 24 year old shooter. Kollie went on to confess to FBI agents that he did “‘hard drugs’ with the shooter as well as marijuana and acid, four or five times a week from 2014 to 2015”.

Betts’ sister, 22-year-old Megan Betts, is among the victims in the Aug. 4 shooting. A friend who arrived in the downtown area with the siblings was also shot, but survived.

On August 4, police and the FBI searched the shooter’s home and found evidence that showed an interest in violence and mass shootings and that he had expressed a desire to commit a mass shooting. A preliminary assessment did not indicate the shooter had a racial or political motive.

On August 5, Dayton Police Chief Richard Biehl stated that: “We have a lot of evidence still to go through…based on where we’re at now, we are not seeing any indication of race being a motive.”  “The materials reviewed thus far reveal that the individual had a history of obsession with violent ideations, which include mass shootings and expressed a desire to commit a mass shooting.” Biehl said.  Investigators are divided and have not determined whether he shot his sibling deliberately. A federal law enforcement official said that they were looking at whether the suspect was associated with incel groups.

The suspect had additional ammunition magazines with him, and was wearing body armor, a mask and wearing protection during the attack. He ordered the firearm used in the shooting online from Texas, and the firearm was transferred to a local firearms dealer in Ohio, where he picked it up. The firearm used was “modified in essence to function like a rifle”, according to the Dayton Police; photos released by the Dayton Police show an AR-15 style firearm with a pistol brace.

Betts was quite familiar with the popular downtown Dayton area. He went with his sister and companion to Blind Bobs that night and then headed to Ned Peppers at 12:13 a.m. and left that bar at 12:42 a.m, authorities said.

Betts “then goes back to the parking lot where the vehicle is at and spends the next eight minutes gathering content out of the trunk,” authorities said at a news conference.

Newly released video shows Betts leaving his car with a change of clothes and a heavy bag on his back. At 1:04 a.m., Betts emerged behind an alley and “that’s when the shooting begins,” authorities said.

Officers believe the firearm used in the shooting was disassembled inside the bag. According to the footage of the crime, there was a nine-minute window where the gunman can’t be seen as he goes missing and then he reappears on footage firing on victims.

Also in the video are several of the first officers responding to the scene while bar patrons fled the other direction. Officials said evidence gathered from cellphone communications between Betts, his sister and the friend who accompanied them to the Oregon District indicated Betts knew where they were six minutes before he began shooting. That location, a taco stand near the bar Blind Bob’s, was the first to be fired upon.

“There was a communication from his companion that they were going to the taco stand and that was about seven minutes or so before the shooting occurred,” said officials.