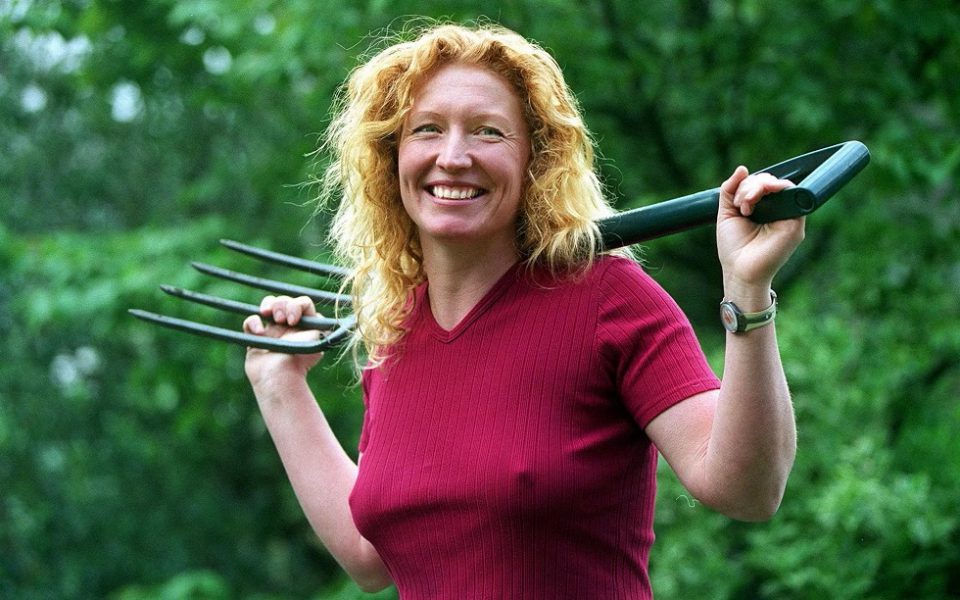 You may have caught sight of the fun English gardener and television presenter, best known for appearing in ‘BBC’ television network’s garden makeover series ‘Ground Force.’

Charlie Dimmock then went on to present television shows, such as ‘Charlie’s Garden Army’ and ‘The Joy of Gardening.’ Along with establishing herself as the go-to-person for anything gardening related, Dimmock works with charity organizations, such as ‘Dreamflight’ which aims at bringing joy to children with serious illnesses. She joined the BBC’s cast of Garden Rescue in 2017 although fans are now concerned that her time on the show has already come to a premature end. The host has also written several books on gardening. Until January 2008, she wrote a weekly column on gardening for the British conservative newspaper ‘The Mail on Sunday.’ In 2011, she appeared as a gardening expert on ‘ITV’ television network’s breakfast show ‘Daybreak.’

Who is Charlie Dimmock?

Charlie is a gardener and TV presenter who has graced tv screens for over 20 years. As one of the original presenters on Garden Force, Charlie joined the BBC cast in 1997 and co-presented the series accompanied by Alan Titchmarsh and Johnny Walsh for five years.

Her professional credits included crossover work with ITV and CBS, presenting the likes of The Chelsea Flower Show and The Great British Garden Revival.

Where was Charlie Dimmock born?

Charlie Dimmock was born Charlotte Elouise Dimmock on August 10, 1966, in Southampton, Hampshire, England, to Terry Dimmock and Sue Kennedy. She was raised in New Forest where she spent her time helping her grandfather in her family vegetable garden.

What has happened to Charlie Dimmock?

Many people believe that Charlie has been sacked from the BBC, but that’s not the case and her absence from any Garden Rescue episode has no deeper meaning than the simple fact that she was away at the time of filming. Since episode 5, Charlie Dimmock will be alongside the Rich brothers for the rest of the episodes. The host has not spoken out about any health issues either, despite speculation of such. Charlie also suggested that she wasn’t ready to hang up her gardening gloves just yet despite a split on Garden Rescue where she was only involved in around half of the episodes.

How old is Charlie Dimmock now?

When did Charlie dimmock first appear on TV?

Charlie Dimmock  went to ‘Wellow Primary School’ before attending ‘The Mountbatten School’ in Romsey, Hampshire. At this school she initially wanted to specialize in forensic science, Dimmock went to a horticultural college from where she graduated. After graduating from college, she started working at ‘Romsey Garden Centre.’ During the early-1990s, Dimmock traveled extensively before returning to Romsey. She then returned to work at ‘Romsey Garden Centre’ where she met television producer John Thornicroft who was looking for water plants. In 1997, Thornicroft gave her an opportunity to appear in the garden makeover series ‘Ground Force’.

Dimmock started working alongside Tommy Walsh and Alan Titchmarsh on the show and quickly became a household name across England. The success of ‘Ground Force’ led to a series of spin-offs including a calendar and a book. She then went on to appear in many TV series, such as ‘Night Fever’ and ‘Clarkson.’

What has Charlie Dimmock been in?

In 1999, she was seen in a couple of television series, namely ‘The Frank Skinner Show’ and ‘Charlie’s Garden Army.’ In the same year, she was also seen in a TV movie titled ‘When Changing Rooms Met Ground Force.’ In 2000, she made a guest appearance in the popular reality television series ‘Masterchef.’

From 2000 to 2011, she appeared in four episodes of the TV series documentary ‘Chelsea Flower Show.’ Meanwhile, she continued appearing in several television shows, such as ‘Charlie’s Wildlife Gardens,’ ‘Comic Relief: Naked Red Nose Ground Force in Practice,’ and ‘The Kumars at No. 42.’

In 2001, she started presenting her television show ‘Charlie’s Gardening Neighbours.’ In the same year, she also appeared in a TV movie documentary titled ‘Cheer for Charlie.’ In 2002, she was seen in a TV movie titled ‘The Joy of Gardening.’ She then went on to appear in TV series and documentaries, such as ‘The Big Breakfast,’ ‘Blankety Blank,’ ‘Hollyoaks,’ ‘Cheer for Charlie: Charlie Goes Latin,’ and ‘50 Places to See Before You Die.’ From 2003 to 2004, she served as the president of the ‘Television and Radio Industries Club’ (TRIC). In 2004, she appeared in four television series, namely ‘The Games,’ ‘Hell’s Kitchen,’ ‘Saturday Brunch,’ and ‘The Late Late Show.’ In the same year, she appeared on ‘CBS’ network’s ‘The Early Show’ where she presented a slot pertaining to gardening. In 2005, she was seen in a TV special titled ‘Hampton Court Palace Flower Show.’ From 2006 to 2008, Dimmock was seen in many TV series and TV movie documentaries, such as ‘TV’s 50 Greatest Stars,’ ‘Celebrity Masterchef,’ ‘Hider in the House,’ ‘The 100 Greatest Sex Symbols,’ and ‘Cooking the Books.’

Apart from appearing on television shows as a gardener, Dimmock has also written many books on gardening. Some of the books written by her are ‘Container Gardening,’ and ‘Water Garden Workbook,’. She has also worked as a columnist for the British newspaper ‘Mail on Sunday.’ Dimmock published a weekly gardening column in the Mail on Sunday for many years, until the year 2008.

Dimmock has also written the BBC Ground Force books Water Garden Workbook and Container Gardening, as well as Enjoy Your Garden, a book on general gardening published in 2000. Dimmock launched her In the Garden range of gardening equipment with the retail chain Poundland on 29th February 2016.She expanded her range in 2017.

Did Charlie Dimmock’s parents die in the tsunami?

On 26 December 2004, Charlie’s mum and stepdad, Sue and Robert Kennedy, drowned when a tsunami hit the resort they were staying in on the Thai island of Khao Lak.

Who were Charlie Dimmock’s parents ?

Charlie Dimmock’s father Terry Dimmock worked as a merchant seaman, while her mother Sue Kennedy owned a shop that sold clothes. Dimmock’s parents got separated and her mother went on to marry Rob. Her mother and stepfather lost their lives during the 2004 tsunami caused by the Indian Ocean earthquake. After losing her mother, Dimmock turned down many offers to appear in television shows and kept a low profile until 2006.

Who is Charlie Dimmock married to?

Charlie Dimmock is not married and says that she is too old for it anyway.

Why is Charlie not on Garden Rescue?

Charlie has not left the Garden Rescue team and will still be knocking about with the Rich brothers across the 2019 series.

However, a new member has been welcomed to the team to help fill the gaps when Charlie isn’t available. Her name is Arit Anderson and she has worked on the BBC’s Gardeners’ World as a presenter. The latest presenter was welcomed into the G Rescue team for season 4. She is an award-winning garden designer, writer and TV presenter. Arit comes across from BBC Two’s Gardeners’ World. You can follow Arit on Instagram under @diamondhill2012.

She was one of the team on Ground Force, a BBC gardening makeover programme, which aired from 1997 until 2005. Charlie has not been sacked from the BBC and her absence from any Garden Rescue episodes have no deeper meaning than the simple fact that she was away at the time of filming.

Who is Charlie Dimmock’s partner?

It is believed that Charlie Dimmock is currently not in a relationship.

They broke up in 2001 when Dimmock had an affair with Andy Simmons who worked as a microphone operator on the sets of the TV series ‘Ground Force.’ She then started a relationship with Barry Smith who worked as a sound technician for the same TV series.

Charlie then went on to fall in love with another BBC sound technician, Barry Smith, yet the relationship didn’t last, with Charlie even admitting that she was “too old for marriage” in an interview.  Charlie currently resides alone in a rented cottage in Romsey which she once shared with John.

What is Charlie Dimmock’s Net Worth?

Charlie Dimmock’s net worth is around $9 million. As a result of her working hard to improve her income and living style, the BBC host is working on some of the upcoming projects which will increase her net worth in the coming year.

What You Didn’t Know About Tom Oakley, Husband of Missy Peregrym