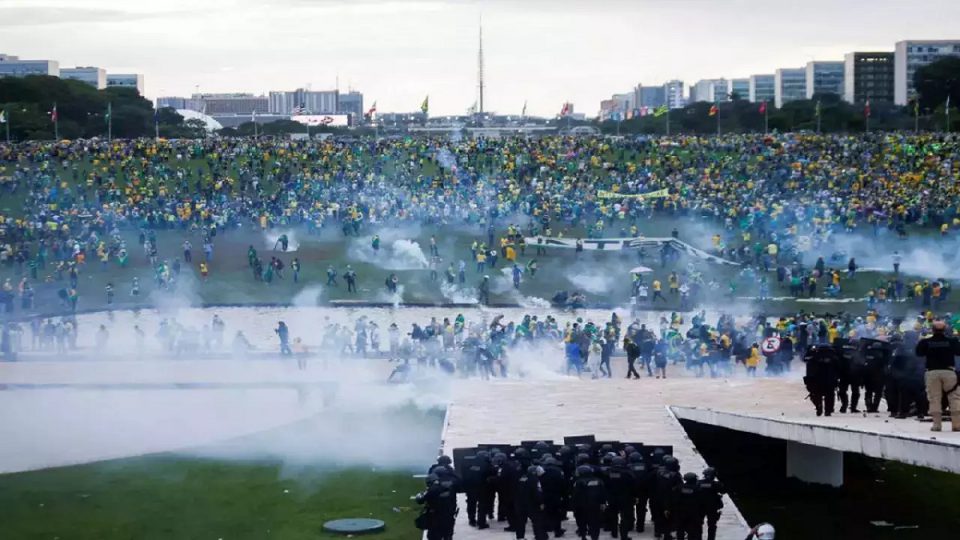 Supporters of the former Brazilian president, Jair Bolsonaro, invaded the headquarters of the country’s three powers on Sunday, forcing federal police intervention to restore order and control. About 300 people have already been arrested. Here’s a small taster of how it went down.

What did Jair Bolsonaro’s supporters do?

After breaking through security barriers abroad, pro-Bolsonaro demonstrators invaded the National Congress, the Planalto Palace, and the Federal Supreme Court (STF), which house the legislative, executive, and judiciary powers, in a violent protest in the capital Brasília, where President Luiz Inácio Lula da Silva was not.

Images broadcast live on social media showed several demonstrators inside the three public buildings, leaving a trail of destruction, with no visible attempt by the authorities to restore order in the first hours.

How did the invasion begin?

The invasion began after radicals from the Brazilian extreme right, supporters of the former president, defeated in elections last October, called a protest at the Esplanada dos Ministérios, in Brasília.

Brazilian police used tear gas to unsuccessfully try to stop the demonstrators, many of whom were calling for military intervention to overthrow Luiz Inácio Lula da Silva, a week after his inauguration.

A few hours after the invasion, the President of Brazil, who was on a visit to areas hit by recent rains in São Paulo, decreed federal intervention in the area of ​​public security in Brasília and guaranteed that all those responsible will be punished.

This Monday, the Senate and the Chamber of Deputies held an extraordinary joint session to analyze the decree issued by Lula da Silva, through which the federal government assumes the powers of Brasilia in matters of security.

What has Jair Bolsonaro been accused of?

Luiz Inácio Lula da Silva also accused Jair Bolsonaro, who has been in the United States since the end of 2022, of provoking and encouraging the invasion that resulted in at least 300 arrests, according to the latest figures provided by the Minister of Public Security.

In a message published on the social network Twitter, the Civil Police of Brasilia reported that there were already “300 arrested. Investigations continue until the last member is identified.”

What did Jair Bolsonaro say about the riots?

On Sunday, Jair Bolsonaro distanced himself from the invasions of public buildings in Brasília and repudiated the accusations of having encouraged the attacks.

“Peaceful demonstrations, in the form of the law, are part of democracy. However, depredations and invasions of public buildings as occurred today, as well as those practiced by the left in 2013 and 2017, escape the rule”, wrote Jair Bolsonaro, via his official Twitter account.

“I repudiate the accusations, without evidence, attributed to me by the current head of the executive of Brazil”, wrote the former head of state.

The invasions provoked immediate manifestations of repudiation from world leaders.

What have other global leaders said about the protest?`

The reactions of repudiation for the acts of violence, but also of support for the President of Brazil, quickly began to emerge, including the Portuguese head of state, who considered “these acts, in addition to being unconstitutional and illegal, inadmissible and intolerable in democracy, reinforcing Portugal’s support and total solidarity with the legitimately elected power in Brazil”.

Lula da Silva thanked Marcelo Rebelo de Sousa for the condemnation and repudiation he expressed for the invasion of the main Brazilian institutions, through a telephone conversation, according to what was published on the website of the Presidency of the Republic.

On the part of the Portuguese Government, the Ministry of Foreign Affairs (MNE) condemned the “violence and disorder” in Brasília and reiterated its “unequivocal support to the Brazilian authorities”.

At an international level, the President of the United States of America, Joe Biden, considered the violence carried out by supporters of the former Brazilian head of state to be “scandalous”, while the President of the European Parliament, Roberta Metsola, said she was “deeply concerned” with the events that took place in Brasilia.

The Secretary-General of the United Nations, António Guterres, also condemned the invasion by supporters of Jair Bolsonaro of the seats of Brazilian power, arguing that the people and democratic institutions of Brazil “must be respected”.

For his part, the President of the European Council, Charles Michel, expressed on Twitter his “absolute condemnation” of the “attack on democratic institutions” in Brazil and conveyed the bloc’s “total support” to President Lula da Silva.

Are the Brazil riots under control?

The Military Police managed to regain control of the headquarters of the STF, Congress, and the Planalto Palace at around 6 PM local time, as well as to completely vacate the Praça dos Três Poderes.

Sunday’s invasion in Brasilia was reminiscent of the events of January 6, 2021, when thousands of supporters of the former President of the United States of America, Donald Trump, defeated at the polls, burst through the Capitol, in Washington.

Brazil Riots: The Start Of The Unrest That Finally Spilled Over

Do Rodents Touch Humans During Their Sleep?

What is Family Law?