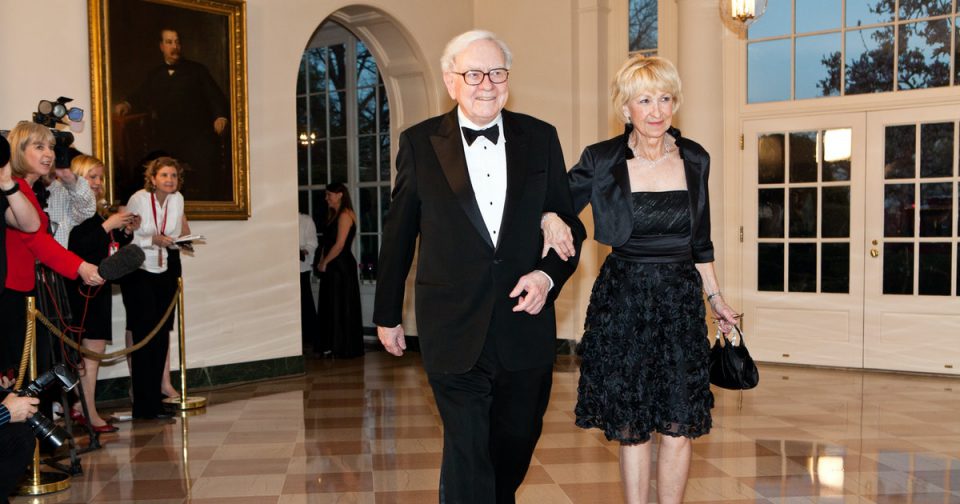 According to Warren Buffett, the man credits his two wives Susie and Astrid Menks with shaping him into the man he is today. Yes, he holds a huge bank account but the two women in his life only helped him earn rather than “break up” marriages (one would think the divorce would be an expensive response to cheating, especially if you married Warren Buffett). Astrid Menks came into Warren Buffett’s life at a time when he was never looking to replace or remove Susie (his wife) from their children. Quite unlike other couples after 25 years together, Susie welcomed Astrid into their lives who was always okay with the idea that she wasn’t going to be Warren’s wife on paper. Here are some fun facts about Warren Buffett’s second wife!

The wife of the third wealthiest man isn’t a socialite.

Before she landed in the job where she met Warren (and his former wife, Susan), Astrid was a waitress working at The French Cafe cocktail bar in Omaha, Nebraska. Buffett’s first wife Susie sang at the very same cafe and was friendly with the staff who worked there.

Astrid Menks was in a love triangle:

The story goes that Warren’s first wife Susie was not only aware of his connection with Astrid but also clearly approved. Warren Buffett was allowed to have an open relationship while he remained married to his wife.

Susan often lived abroad while pursuing her own career and interests – one that even included wooing Astrid when she was in Omaha. Both women were seen together in public on many occasions, sometimes even holding hands.

Among her other interests, Astrid Menks is known for her charitable contributions to the local Zoo. The Latvian-American philanthropist, along with her husband, has helped to donate millions to the zoo in addition to organizing charities that were once Susan’s before she passed away.

Astrid Menks and Warren lived together happily for three or four decades before they married:

According to most sources, they were in a forty-year engagement. But Susie passed away in 2004, and the other Buffett couple married in 2006, a respectful two-year gap after Susie’s death. Most women would not have this much patience because Astrid certainly had plenty to spare. But let’s face the facts, most women are not Astrid Menks.

Warren Buffett’s wives both were featured on their Christmas cards:

Many men usually try to hide the fact that they have love lives with two women. Warren Buffet was never one of those, or perhaps Susie and Astrid would have none of it. In fact, the Christmas cards sent out from the Buffet family both include Warren and his 2 lovers – Susie, and Astrid. The trio signed it together and even showed their pride in the unorthodox arrangement. They liked working together and never hid it but neither did they particularly seek to flaunt it.

She’s originally from Latvia and immigrated to the USA:

Like so many other Americans, Astrid is an immigrant who came from Latvia. For the geographically disinclined, that would be somewhere near Russia.

The now Latvian-American philanthropist first grew up in a small country on the Baltic sea right between Lithuania and Estonia. Latvia is best known for its forests, beaches, and beautiful art nouveau architecture in the large city of Riga.

While it may not have been her ultimate dream to work as a cocktail waitress, it certainly helped her find the American dream. Not to mention, it paid off as Susan saw Astrid Menks and soon the Astrid Menks-Susan Buffett’s friendship love triangle meant that this Russian lady would be married to one of the most wealthy men on earth!

Astrid Menks used to make a special soup for Warren:

There is an old cliche that the way to a man’s heart is through his stomach, which means that you can make some memories with food! This was exactly what happened as some sort of special soup was a part of Astrid and Warren’s early courtship. According to some sources, Astrid would bring it to his home and the rest is history!

Multi-billionaires throw themselves insane extravaganzas for their birthdays or they get married to Astrid Menks:

Rather than celebrate his 76th birthday, Warren Buffett’s birthday wish might have been to marry his longtime companion Astrid. The pair tied the knot on August 30th, 2006.

Multi-billionaires also throw themselves insane extravagant weddings where the dress alone costs the bride over a million dollars.

However, Warren and Astrid simply opted for a very cozy and private ceremony where they exchanged vows in front of a few friends and his children – the man knows how to save money too!

Speaking of a man who knows how to save money, Astrid and Warren still shop at thrift stores.

Despite having an abundance of it, it’s crazy to think that one of the traits these billionaires share is a certain thriftiness.

The home they live in, in Omaha, was only worth around $31,000 when he purchased it and they’ve never moved.

Rather than spending like there’s no tomorrow, this ‘power couple’ won’t live like the world is their oyster. In fact, multi-billionaire Warren has even pledged to spend the majority of his fortune on charity when he passes away.

According to his daughter, Astrid Saved Warren:

Susan Alice Buffett Warren’s daughter credits Astrid with basically saving him. While she never came right out and said it, the implication was that while her mother left to pursue her own interests after two and a half decades, her mother still couldn’t be happy leaving her father alone.

Astrid was the one who came in and filled that role, and Susie was happy to see someone could. She’s said she doesn’t think it would work for everyone but is glad that it worked out for her parents.

Astrid Menks is not one of those women who want to be famous:

As a philanthropist, she has a minor reputation, but she mainly keeps to herself, has never been part of a scandal, nor has she been to rehab. Astrid Menks is extremely low-key, never having been to court for mistreating staff or for any sort of traffic violations/DUI like many rich women have.

Unusual Things That Could Cause Your Car To Breakdown