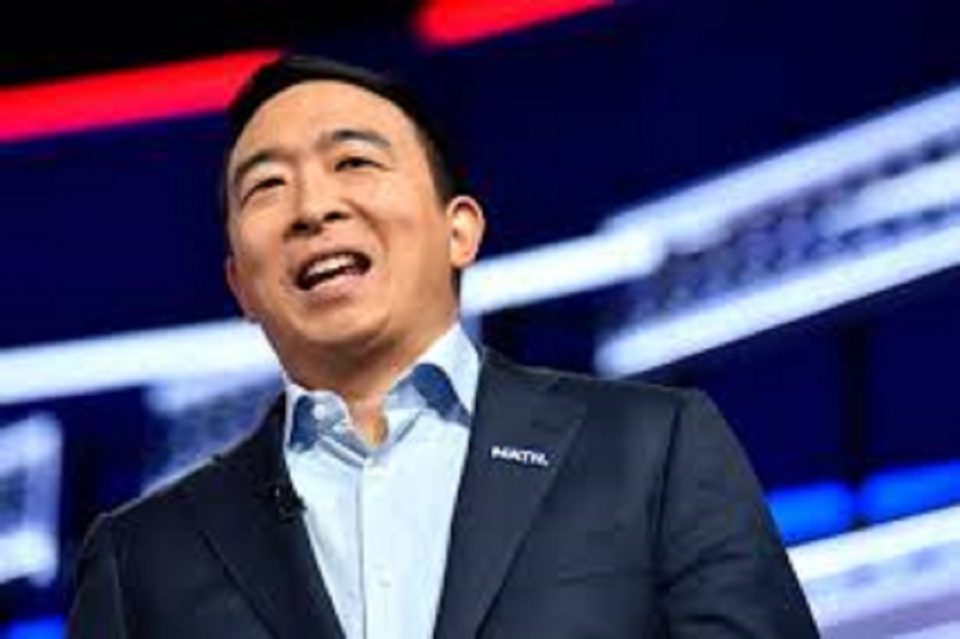 Democratic candidate Andrew Yang announced that he was running for president back in 2017—and has been considered a long-shot candidate for most of his campaign. But he has bucked the odds and remains in the race long after establishing himself as an “outsider” candidate.

Just a couple of days after the debate, Yang was trending when he defended comedian Shane Gillis, who got fired from “Saturday Night Live” after racist comments about Asian-Americans became public.

Yang, 44, was actually one of the targets of one of Gillis’ jokes, but he said he didn’t think Gillis should be laid off over the comments and even invited him to sit down for a conversation.

Andrew Yang grew up with parents who are actually Taiwanese immigrants. The politician was born in Schenectady, near Albany, and he has one brother.

Yang went to Phillips Exeter Academy in New Hampshire and later attended Brown University and Columbia Law School. Andrew currently lives in midtown with his family, according to reports.

According to Andrew’s website, the politician says that he met Evelyn in his thirties, while he was working at test prep company Manhattan Prep (this company would later be bought by Kaplan, a big player in the industry).

A Voices of New York profile once wrote that they met on Columbia’s campus. Andrew did attend law school at the university, but would have graduated before reaching his thirties—he was likely on campus for a non-academic reason.

The presidential candidate has talked about his wife, Evelyn, and their two sons, one of whom has autism, when explaining new ideas he wants to make in the country.

“I like to talk about my wife, who is at home with our two boys right now, one of whom is autistic,” he said at the Democratic debate on July 31, 2020.

“What is her work count in today’s economy? Zero. And we know that’s the opposite of the truth. We know that her work is amongst the most challenging and vital.”

5. He also has made funding autism intervention part of his platform:

“One of my boys is on the autism spectrum — I know how invaluable resources and intervention can be, particularly if adopted early on,” he stated on his website.

“Families struggle with this in very personal ways. As a country, we should provide ample resources to parents to be able to intervene to support the development of children with autism or who are exceptional in other ways. These children have something unique to offer.”

6. Yang is an entrepreneur:

Before he started his career in politics, Yang worked as a corporate lawyer, and even started a celebrity philanthropic fundraising site that failed a few years later.

Andrew then worked for multiple startups, including a healthcare software company. Later, he was the CEO of a Manhattan test-prep company, which was bought by Kaplan in 2009. After that sale, Yang founded the nonprofit Venture for America, a fellowship program for recent college graduates that have shown a passion in entrepreneurship.

7. He wants to develop a universal basic income:

The presidential candidate has focused his campaign on the threat of automation on American jobs.

“New technologies — robots, software, artificial intelligence — have already destroyed more than 4 million U.S. jobs, and in the next 5-10 years, they will eliminate millions more,” he wrote in a statement on his website. “A third of all American workers are at risk of permanent unemployment. And this time, the jobs will not come back.” Yang’s solution to this problem is to give a “universal basic income” of $1,000 per month to every adult in the United States. It would be funded by a tax on companies that benefit from automation, Yang has said.

8. Andrew’s slogan is the opposite of Trumps:

Most democrats will agree that Yang’s campaign slogan holds true after Joe Biden takes over from Trump. Yang says “The opposite of Donald Trump is an Asian man who likes math,” and he has said “math” is an acronym for “Make America Think Harder.”

Yang has been seen wearing “MATH” hats, which are also being sold by his campaign. “The ‘MATH’ hat is an essential item for any true Andrew Yang supporter,” which he proudly promotes as merch.“Celebrating numbers and facts is an essential part of our campaign.”

9. He is the godfather of Teddy Roosevelt’s great-great-granddaughter:

When asked by The New York Times if he has a political hero, Andrew Yang said he is “a big fan” of Theodore Roosevelt, and he shared that he is the godfather of the former president’s great-great-granddaughter – what a cool life!

Make Your Tresses Happy: 8 Hair Mistakes You Need to Avoid!