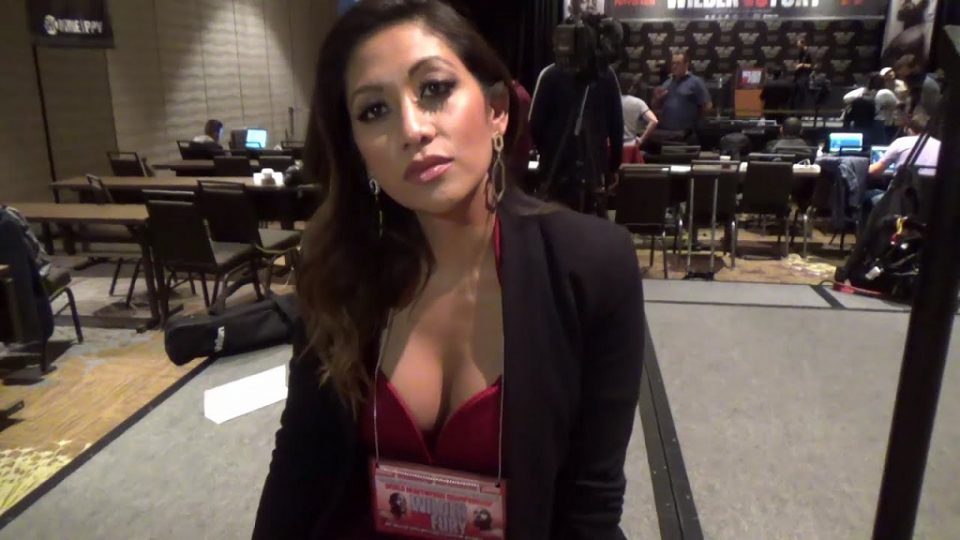 Garnering over 12k followers on Instagram @TheRealFightGirl and close to 6k on Twitter, Cynthia Conte is a sports reporter of RingTV and a host and commentator. The podcaster and host is half Italian and half Philipino. The Real Fight with Cynthia Conte is her Youtube channel that covers mainly boxing and anything that involves “The Real Fight” within the lives of her guests. Her greatest fame came with interviewing all-time greats like Manny Pacquiao and more.

1. Cynthia Conte is often one of the very few females sitting in the press row at major fights. She’s also not afraid to ask tough questions and more importantly, she knows what she’s talking about:

Cynthia Conte has loved boxing since childhood. Cynthia Conte works for Ring TV as their lead on-camera reporter & also for the WBC as an ambassador & Correspondent that covers all the big fights. Conte also is the hostess,  for post-fight in ring interviews. The boxing reporter also commented for 360 Promotions “Hollywood Fight Night.”

It goes without saying that she was her own PR person for the gym and wrote for social media platforms and local media.

3. Her fitness interest came from a love of another background:

She was mesmerized by the art of the sport, and drawn to the masterful footwork of the fighters because of her dance background.

4. Conte, who has interviewed all-time greats like Manny Pacquiao in the past:

The reporter has surged quickly up the boxing media food chain. Her first foray into boxing came during the weekend of March 18, 2017, for the Gennadiy Golovkin-Danny Jacobs fight at Madison Square Garden.

“I just kind of dropped in, and no one knew me, so I really didn’t know what I was doing,” recalled Conte, who’s Filipino and Italian. “I knew how to interview people, and I took off running from there. It is a male-dominated field. Women have to still prove themselves.”

5. Conte, who worked for KTLA (Channel 5) in Los Angeles, said she began reaching a comfort level in boxing 2019:

She learned the landscape and the important players in the sport, as well as growing used to the media menagerie that travel to each major fight.

“I always say my dream career fell into my lap,” Conte said. “I moved back to Los Angeles from New York and wanted to do something with boxing, or entertainment reporting. I learned on the job, and (Ring editor) Doug Fischer really took care of me.”

“We all love the brutality, and the savageness of the sport, and it’s a very forgiving sport. Because there is a lot of s— in boxing. I’m pushing for more, and I’ve always been taught to work your ass off. “At any moment, everything you work for can be taken away.”

Cynthia Conte went to California State University-Fullerton for a Bachelor’s Degree Field Of StudyRadio, Television & Film Communications. According to her bio, she has worked as a Boxing reporter since 2016 giving her 4 years plus experience. On the sideline not only did she own and operate a 6,000 square foot gym in the city of Downey, which offered programs to all ages, she was also a real estate agent since 2002. She was responsible for daily recruitments of possible clientele to purchase homes in California and Nevada till 2010. What a hustle girl!

Robinhood: Is the Famous Trading App Available in Canada?