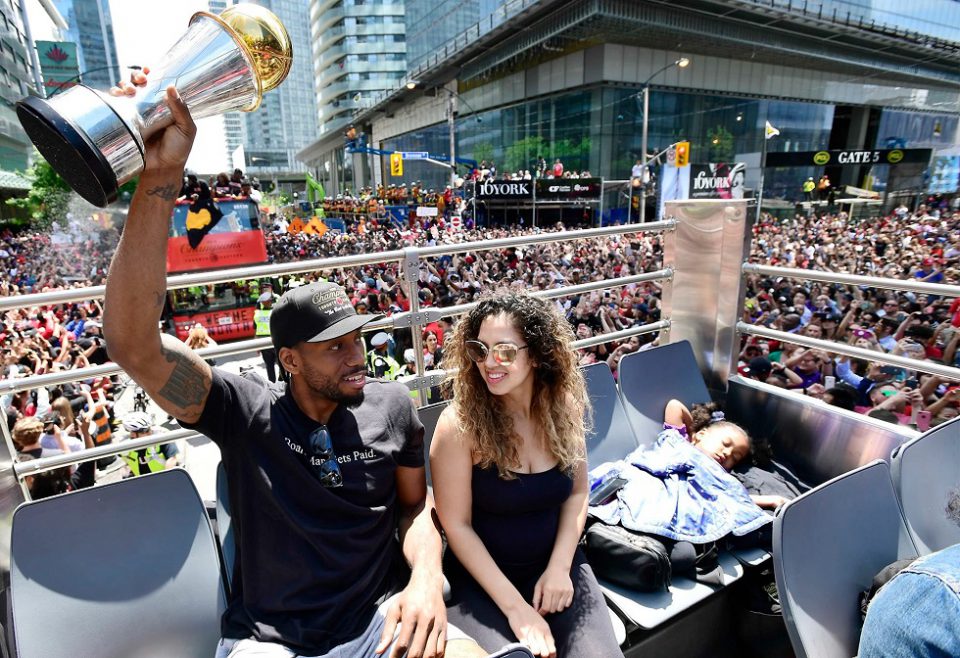 Kishele Shipley is the striking tall girlfriend of the NBA player Kawhi Leonard, who’s currently with the Toronto Raptors. Kishele’s boyfriend is originally from Riverside, California, and has become one of the most dangerous and spectacular players in the NBA with his claw-like hands. Like Leonard, Shipley is a very soft spoken,private person and prefers to keep out of the limelight. She doesn’t have any public Twitter, Facebook, or Instagram accounts. Both of her sisters Kenisha and Kasandra are active on social media but they respect their sister and Leonard’s privacy and do not post anything about the pair. Because of this, there aren’t many photos of Leonard’s alleged wife online but his girlfriend was spotted last season cheering him on at Raptors home games. Let’s get started and learn some interesting facts about Kishele Shipley:

Kawhi Leonard’s dating life has been kept as private as possible in order to protect his family and Kishele, but this is what we know about her:

1. Kawhi Leonard and Kishele Shipley Met in a College

Kawhi Leonard, who previously played for San Antonio Spurs, is believed to have met the love of his life in his college. Leonard and Kishele both attended San Diego State University; while Kawhi focused on his basketball career, Shipley graduated in Public Administration.

While there was a time when the couple went through a rough patch in their relationship as they were separated as games took place miles away, their college became the meeting point where the couple found their love and decided to move in together. After graduation, Kishele started working as a Human Resources professional in San Diego while Leonard joined the San Antonio Spurs in Texas. But she decided to give up everything to be with him and moved to Texas.

As of 2019, Kawhi Leonard’s net worth is estimated at $35 million according to Forbes.com. Kishele, on the other hand, has managed to keep her salary and assets largely unknown though she arguably makes a sufficient amount from her career. After receiving her education from SDSU, Kishele started her job in San Diego as a Human Resources Professional, and being a very good vocation, she must have earned a noteworthy salary. But this job wouldn’t last too long. As she and Kawhi were becoming a serious couple and because Kawhi had to move to Texas to sign with the San Antonio Spurs, Kishele left her job and moved together with Kawhi.

NBA star Kawhi Leonard and his girlfriend Kishele Shipley began to live together and things started moving forward quickly. In July 2016, two years after Kawhi was chosen as the NBA Finals MVP, the couple welcomed their first child: daughter Kaliyah Leonard. In March 2019, Kawhi surprised the Toronto Raptors’ fans (where he was playing at the time) when they didn’t see him during a game against the Chicago Bulls. It was later speculated that he was next to Kishele, who had just given birth to their second child, a boy named Mark.

While there’s a confirmation of their first child, the information of second kids lacks evidence. There are zero photos but according to one of the media outlets, the couple welcomed their second child, a son, in 2019 at Mount Sinai Hospital in Toronto, Canada. But we suspect this is mere speculation.

Back in April 2019, Narcity reported that Shipley gave birth to a baby boy at Mount Sinai Hospital in Toronto. Raptors fans flooded social media to express how delighted they were over the news that the couple’s son would be a Canadian citizen since he was born in that country. All this being said, the reports of the birth of another child were not confirmed either and during a June 2019 interview, Leonard talked about things he enjoys doing off the court like hanging out with his daughter. However, he did not mention anything about a son.

“Once I do other stuff, you might see me interact a little bit more, tell jokes, laugh,” Leonard said. “You’ll see the things I like to do other than just playing basketball like fishing, going golfing, or just hang out with my daughter.”

Kishele Shipley, born on April 10, 1989, in San Diego, California is now 30 years of age. Her parents are Kenneth Shipley and Cathy Marie. She is the second of three siblings. Her sisters are Kenisha and Kassandra. If you’re wondering about Kishele Shipley’s race, then she is of multiracial ethnicity and has Aries as her birth sign.

30 year old Kishele Shipley is very private and has managed to keep her life and that of her kids away from the limelight, which is quite a remarkable thing especially for a public figure.